Not all of us have the ability or talent to learn several foreign languages, but when visiting new countries, making acquaintances or getting a job, these skills are indispensable. To make life easier for its users, Google has released a photo translator - an add-on to Google Translate - Word Lens. This mobile app translates text from a photo, from a picture or other images with text. Google Photo Translator captures a photo and translates it into one of the 38 most common languages in the world.

Contents hide
1 How do I use Google Translate to translate text from photos?
1.1 What Google Translate photo text translation looks like in action
2 In the video you can see the principle of the mobile application - a translator with a photo:
3 From personal experience using an online photo interpreter
4 Online voice or sound translation
5 Help in learning a foreign language

How do I use Google Translate to translate text from photos?

To use the Google Translate app as a photo translator, you need to launch the app, enable access to the camera on your cell phone, point your smartphone camera at a picture with, for example, English or German languages. That's it. The app will translate the text in the picture online and display it to you. In the beginning, when the app was first released, only a few languages were available (Russian, English, French, Spanish, German and Italian), but now the list has been expanded to 38 languages, including such translations:

But the developers of the text translator from photos do not intend to stop here. It is worth noting that the moment of release of simultaneous translation was awaited by all users. Translation from pictures in real time, they promise to improve further, so it did not take more than a couple of seconds. Highlighted and other features of the program:

What Google Translate photo text translation looks like in action 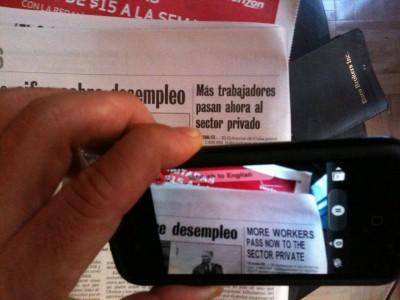 The only disadvantage, is that the translation of text from the photo, where the handwritten test, is difficult because the application is difficult to recognize it. Now you can only work in pairs with English, but later you can choose language sets on your own. In Google Translate you have to enter and translate text one at a time to communicate, but this is promised to change, and then the languages will be detected automatically, which will be applied to Word Lens as well.

In the video you can see the principle of the mobile application - a translator with a photo:

Recall that previously you had to buy languages to translate text from photos for money, but after purchasing Quest Visual, any linguistic set is free, albeit not for long. That's why you should rather download Google Translate with Word Lens to your phone if you're going on a trip and you're not good with English, Spanish or French.

I recently went on a trip to Hungary. Hungarian itself is very difficult, and Hungarians are in no hurry to learn English. That is why the app was very often helpful, especially in the store, when choosing goods and souvenirs. A little tip-tip - I recommend downloading a dictionary into the app beforehand, so that you can translate text from a photo without having the Internet (offline).

It occurred to me how much the world is improving. Of course, knowledge of languages is useful and necessary, but thanks to new technology, this knowledge is not something unique. And if we look 10-20 years into the future, I see a picture where not only texts from photos and images are translated online, but voice as well. When the profession of translator will be handed over to robots or applications like this one on the first text in the picture, and they will have to find a new application. Alas.

Among other things, the Google Translate app supports voice translation. So, when you travel, you can speak into the app in your language, and it will translate into the desired language and vice versa. The world is changing.

Help in learning a foreign language

I thought the article would not be complete if I did not recommend an app that would help you not to use all kinds of online translators with photos or images, you will just understand the words immediately. The app is as simple as possible. You only learn 10 words a day.

That's it for sure now 🙂

If after learning English or much more difficult Chinese language you want to take a break, but I recommend you to play mobile games. First of all, it will clear your head a little bit from learning the language, and secondly, if you choose the right game, it can be a continuation of language learning. I recommend to pay attention to