Despite the fact that the App Store abounds with an impressive number of shooters, users continue to look for well-known titles (for example, CC for the phone), hoping that some company has adapted their favorite games for mobile devices. Take, for example, the first part of Max Payne - it was ported without much trouble, the game fully fit into the smartphone, and it is quite comfortable to play. But here is Counter-Strike: Global OffensiveIt seems that they will never port it - it's too hard to work out the dynamic gameplay and adapt it for tap control, but third-party developers are busy making lookalike shooters. Which, it turns out, are in high demand and get good ratings. However, you shouldn't compare all these shooters with AAA titles - as a rule, imitation games are made by small companies (or even indie developers), so don't expect them to have any graphic delights or anything like that.

The first game on the list is probably one of the most successful copycats of the original Counter-Strike called Special Forces Group 2. At least, its rating of 4.3 (6.5 thousand ratings) should tell you that, which for the Russian App Store is just some kind of unrealistic figure. Here you can play with bots on plus or minus known maps, especially successful parodies of de_train and de_dust_2 - some key locations are very similar. Pleasantly pleased with the interface - the buttons duplicated shooting from both sides, which allows you to aim with your right thumb, and shoot with your left. The game has no recoil at all, there is a mode of aiming (as in Call of Duty), and also surprised active automatic shooting - in the game you just have to aim, and the killing will happen automatically. Walking on the "shifter" (so you can not hear the clatter of boots) is also interestingly implemented - just pull the joystick motion not all the way.

The second game on the list is. Counter Attack Multiplayer FPS. It has a lower rating than the previous one - 4.1 (941 scores), but noticeably nicer graphics. There are not many maps, the interface is weaker than the previous one, but the locations are even closer to reality. For example, all the same legendary de_dust_2 in the game is drawn in places very similar - the parapet, A-plank, length, T-Response. There is also no recoil, there is a mode of aiming, but the shot button is not duplicated, which significantly complicates the shooting (treated with settings). There are a few modes - deathmatch, training, team play; but almost all weapons come with skins at once. As the developer assures, the shooter demands a lot of skill - each weapon has its own shooting speed, reloading, bullet dispersion, so you need to adapt, just like in Counter-Strike. I did not like the ragdoll - the enemies fall to the ground as low-polygon stumps, which significantly spoils the impression of the game.

By the way, it is worth noting that both games provide an opportunity to view your weapon, and the mechanics is implemented as in Counter-Strike - the character rotates the weapon in the same sequence, such a reference is very nice. 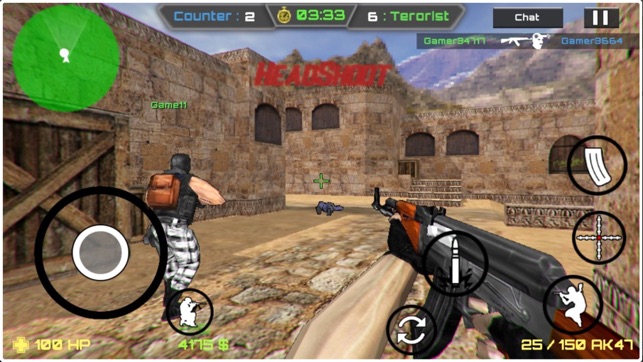 But if you want to play the old "kontra", then for such users there is Counter Shooter Strike - A game with old textures, migrated from 1.6 directly to smartphone screens. There is no point in comparing it with previous games - it's the old Counter-Strike, so there are no extravagances like skins or weapon views. The gameplay is not bad, the developers also tried to adapt the interface (but the shooting button here is not duplicated on the left side of the screen), it is possible to switch to aiming mode, silent walking is also present. I liked the fact that de_dust_2 was taken almost identical, and the scale feels the same. Weapons are about the same, but costs many times cheaper, so there is no need to play around with the economy. For all that, the game has a rather weak rating of 3.7 (only 257 ratings).

Standoff 2 - This is a slightly more serious variation on the theme of Counter-Strike, as the game was created by a whole team of developers. Qualitative approach is already visible at the start of the game - a normal lobby, full-fledged player statistics, the ability to buy skins on the market (including StatTrack technology, which counts the number of kills with this device). You can customize the game to your liking, adjust FPS, quality and detail textures, build convenient controls and so on. The level of the game corresponds to the rating - 4.4 (more than 10.5 thousand estimates).

The game has several modes - team combat (the team with the most kills wins), laying bombs (the usual 5x5 game for 15 rounds) and arms race (after the kill, the weapon changes automatically). All of this is very similar to the canonical Counter-Strike: Global Offensive, which was a pleasant surprise. The gameplay itself is much closer to the original - digitized character models on the verge of being sued by Valve's lawyers, a lot of skins, nice maps. They, by the way, do not look like the original, but the general direction is clear - similar textures are used, which was nice. And most importantly, the game is difficult to shoot because of the recoil and different scattering of bullets, which adds to the realism. And, again, there is a problem with the interface - you can not adjust the shooting with the button on the left, and it will take a long time to adapt to the game, so get ready to spend most of your time in "speculator" mode.

The other shooters that can be found in the App Store are much less similar to Counter-Strike, but they are also made more convenient. The same Shadowgun LegendsFor example, it looks much more complete and self-sufficient than all of the above (with the exception of Standoff 2, it is also good in its own way). Or, if you want another, less dynamic alternative, you can play PUBG Mobile. In any case, you can't wait for Counter-Strike to be ported to mobile devices, so either choose games that were originally designed for them, or be happy with what you have, or download the game client on https://7launcher.com/ and play good old KC on your desktop.