We continue to write guides on the current meter in the game Mobile Legends. Kagura is one of the most interesting and difficult characters in the game, although for those who figure it out, it's no longer difficult. I've played about 100 games as her and I'm playing her pretty well now. Let's get started. In this guide I'll tell you everything I know about this character, burn tricks, combos, and other tips.

By the way, the Guide to Harley, Cloud and a review of the season 12 metha Mobile Legends.

Playing as Kagura is leisurely and unhurried. On the one hand. On the other hand, as soon as you have to do a combo, it's almost lightning-quick and does total damage. Judge for yourself what it takes to make a perfect combo.

A perfect fight for Kagura

This is one option, the other with a different order of ultras.

It looks a bit complicated, but in fact, with some skill - everything is quite easy to get through. Be sure to practice a couple of games with the computer, do not spoil the game for yourself and for people, yes in Searches. The main skill that does damage is our ult (the third ability). First without the umbrella, and then when we jump to the umbrella or vice versa. This all looks especially great in the leyte and with a good team. Kagura, unfortunately, is pretty team dependent. And she really needs a tank that will pull enemies into her. But okay, let's figure out the abilities and the build.

When Kagura picks up the umbrella, she gets protection in the form of a shield that can not only absorb damage for a while, but also stun an enemy nearby for 0.5 sec and slow for 60%. The effect is activated once every 4.5 seconds.

Skill 1: Unfolding the umbrella of Seimei

Kagura throws an umbrella in the indicated direction. The umbrella does damage + slows the enemy for 60: 1 sec.

Kagura moves in the specified direction, leaving the umbrella in its place. If you press the skill a second time (when it's purple) Kagura will move back to the umbrella and deal damage + passive damage (remember: it's a 0.5 second stan + shield)

(purple) Kagura deals damage to enemies surrounding the umbrella and creates a bond with them (visible threads). If enemies don't reset the tether after 3 seconds, they will be drawn to the umbrella (this is where you should fly in through skill 2 and again through skill 3)

Skill 3 (blue) when Kagura with umbrella. Deals damage to enemies, pushes them away and gains a shield.

It looks a little complicated, but it's elementary, you just need a little practice.

I still believe that it's not the build that rules, but the hands.

Here's a build that I like and that does super damage. I build in this sequence:

These builds are just in case someone wants to experiment. They also proved to be quite good, but I like the one above better. 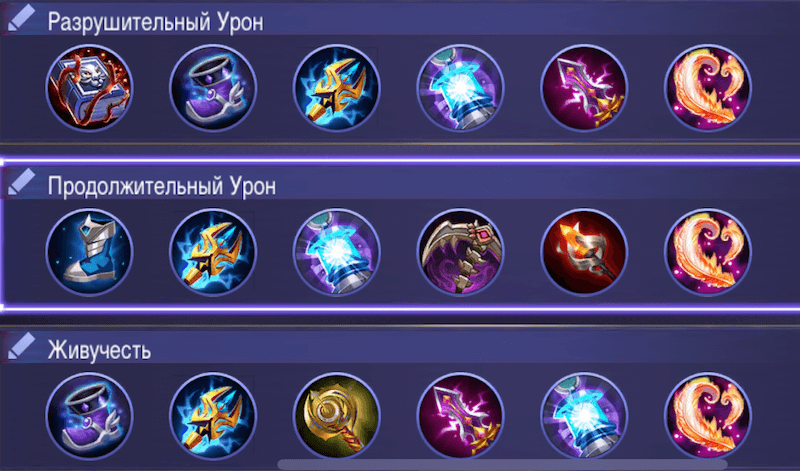 How to properly play as Kagura

As I said before, playing as Kagura is very leisurely and measured. And it reveals itself in the leyte, when it collects at least a couple of decent pieces: a wand and a scythe. Your main task is to poke the enemy with the umbrella from the rear. It has a pretty good range. But let's take it one step at a time.

Unfortunately, more good guides I have not found, so if you have a better - write in the comments, I'll add.

I found this English-language one.

Really explanatory. Even for those who are not very in the subject, you can sit with a dictionary, because it is without a verbal explanation. The video says it all in a nutshell, and the video makes it all clear. Enjoy!