The world is gripped by hysteria around augmented reality games Pokemon Go. In less than a week, the creators of the game have earned $7 billionIn short, in the game you have to catch those very Pokémon, which are hidden in the most unexpected places... in the street, in the real world! In order to catch them, you have to leave the house and actively search for them in the area. The game is not yet available in all countries, but thanks to various cheats you can already play in other countries, besides the official: Ukraine, Russia, etc. They have already made a special service to see what countries are running the game.Full information about the game from tjournal.

Contents hide
1 How to install Pokémon Go now
2 The Complete People's Guide to the game Pokémon Go.
3 Who are the Pokémon?
3.1 The Pokemon Go trailer has over 18 million views on YouTube
3.2 2. Rerecorded scene from "Black Mirror" series
3.3 6. Announcement on the road
3.4 7. Video from Playboy

How to install Pokémon Go now

The Complete People's Guide to the game Pokémon Go.

Who are the Pokémon?

Pokémon are pocket monsters with supernatural powers that are found and trained by Pokémon trainers. They stage fights between the monsters - until one of them passes out or its master declares defeat. Each monster has its own strengths and weaknesses. The victorious pokémon gains experience and the opportunity to evolve into its next form. 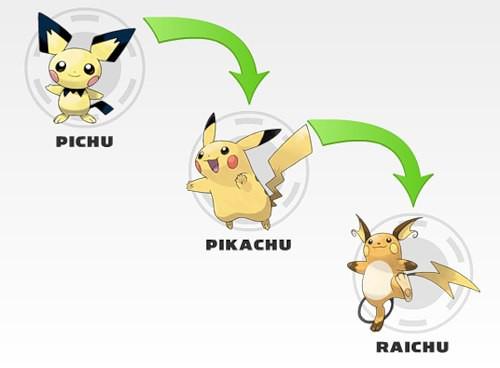 Trailer Pokemon Go on YouTube has more than 18 million views

In which the girl is terrified and doesn't understand why everyone is wandering around with smartphones in their hands. And the British directors of the series weren't so wrong, were they? https://youtu.be/dzZ7JzecnqY3 The Holocaust Memorial Museum asked visitors to refrain from catching Pokémon on the grounds because "it's inappropriate. "4. RocketBank offers 50 rubles for a caught Pokémon.

5. Great text from Anatoly VorobeyTrying to imagine myself from 1991, a quarter of a century ago, explaining to myself what the new popular game Pokemon Go is. "In short, people walk around with phones and catch little Pokemon, but not really, but only in the camera.No, not at home at home, but outside, indoors, wherever, in short.I mean why with phones? With cell phones. They're small and you can talk on them anywhere. Well, yeah, radios. Everybody's got one. And they have Internet. Internet is... you know, like you can call from one computer to another by modem? Internet is the same thing, but all the computers are connected to each other all the time. Yes, one network for the whole world. And it costs the same to connect to a computer in America as it does to a local one. You don't have to pay for an international call. You don't have to pay at all, it's a flat monthly fee. I mean, what's a phone got to do with it? It's also a computer. Well, yeah. It's about two hundred times faster than yours. It's got a screen the full size of a flat screen. Two gigabytes of memory. No, you don't understand, GIGABYTE. You don't need a keyboard, it's got a touchscreen. Never mind, its buttons are small. Anyway, did you get the phone? It's about the size of a credit... shit, about the size of a wallet, a whole computer inside, and it's connected to the Internet. No, it's battery-powered. Well, it's battery-powered. It lasts a day, at night it's all plugged in. And it can take pictures and video. What do you mean? What the... digital recording! Straight to a file! No, you don't need a floppy disk. There's flash memory right in the phone. It's like a hard drive, only better. Lots of pictures. Thousands! No, you can take them from your phone straight to the cloud. Shit. To another computer, far away, that stores your files. No, not to your house, but to some other place. I don't know where! It doesn't matter! So you take your phone, and you download a game to it. That makes sense, right? You start the game, and then you put it in video mode. The game keeps running. It's a, what's its name... a resident app, that's it. TSR game, yeah. You hold the phone right in front of you, and the camera is on the back of the phone. The video recording software comes on and shows you on the screen what the camera sees. And the game puts Pokémon in there. They're these toy Japanese monsters. Like Cheburashka, only even smaller and there are 700 kinds of them. There's a lot of cartoons and computer games about them. They sort of fight each other and they have different levels, magical powers and so on. Well, yeah, for kids, of course. But those kids are all grown up now, and they still remember pokemons. You remember who Cheburashka is, right? Well, the game draws such a pokemon on top of what the camera shows. Like in the movie Terminator, remember how the robot sees? Same principle, but for real. I mean not for real, you know what I mean. Yeah, the important thing is that these monsters are the same for everyone. I mean, if two people stand next to each other and point their phones at the same place, they will see the same monster in the same place. And if one of them captures that monster, the other can't. I mean, how does the game know? It knows where you are, it takes the coordinates and asks the server what pokémon are there, and then draws...So, let's go in order. The server is a powerful computer that has all the information about where what fake pokemons are on the real coordinates on the map. I don't know where it is. It doesn't matter! Where you are...well, there are these satellites in the sky...no, I'm not kidding. It takes a long time to explain. The phone picks up signals from several satellites, estimates the time of reception of the signal, finds the distance to the satellites and triangulates, there's your position. Yes, VERY accurately. A few meters. Honestly! The game distributes fake pokémon around the map. You see where to look for them in the game, and then you look at them through the camera and catch them. To catch them, you have to throw a ball. No, not a real one... also in the game. And then you have them on your phone. What for? What do you mean what for? Well, you can train them. And send them out to fight other Pokémon..."

6. Announcement on the road 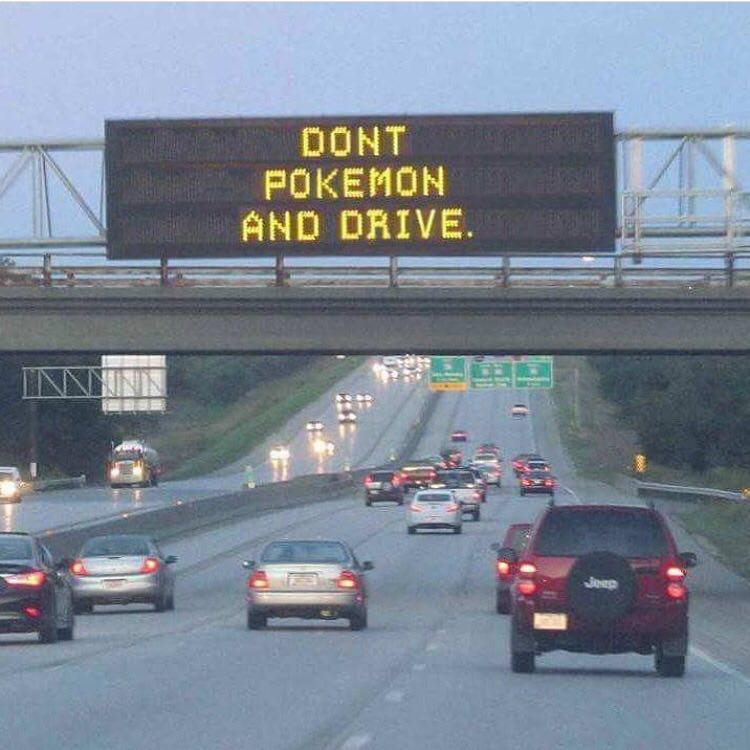 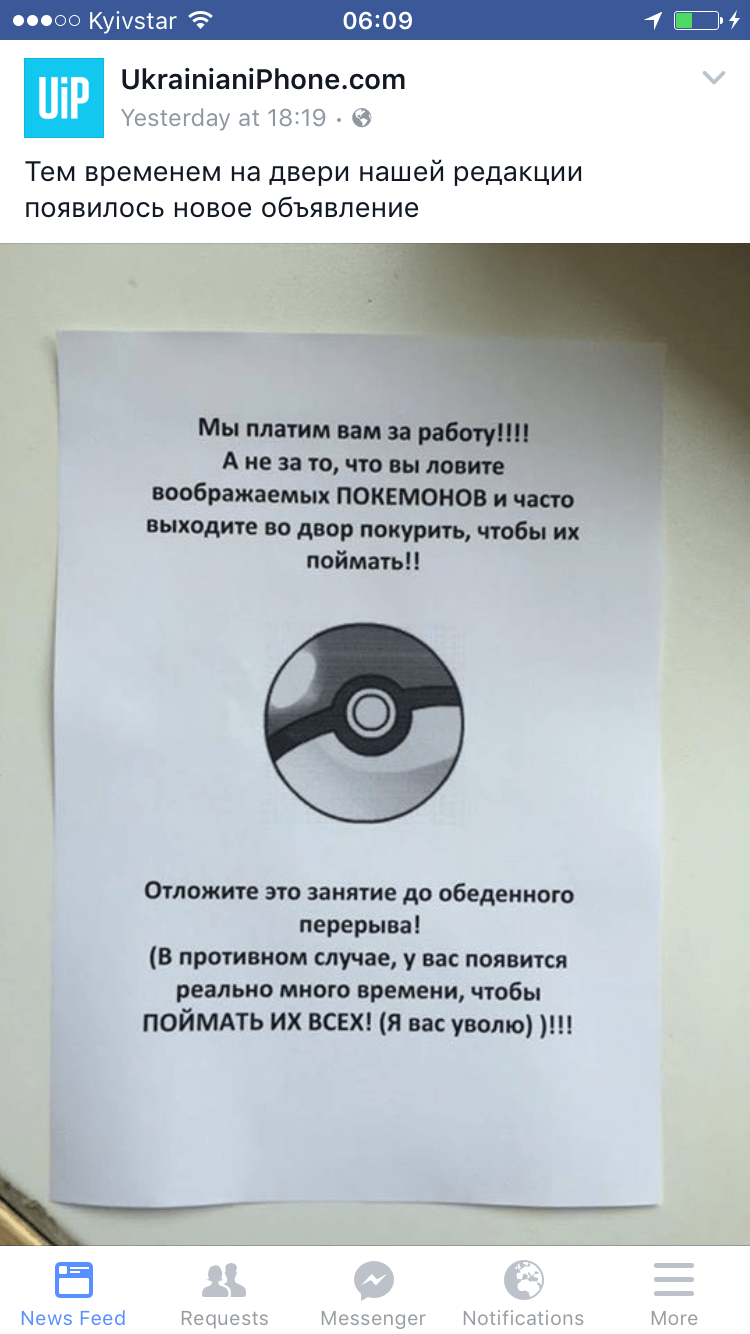