Evil Hunter Tycoon is an NPC simulator in the world of RPG games. At least, this is the impression one gets from the game after the first couple of hours of direct immersion in the environment, because here we are not engaged in mopping up the area, collecting loot, and pumping up your character. On the contrary, we create all the necessary conditions for the "hunters" (the name of characters who would enter the RPG as protagonists) to be able to heal, rest, buy weapons, sell their accumulated loot, and go on raids. The concept is successful, but not without flaws - let's look at what is so good in Evil Hunter Tycoon, that it received 500 estimates with an average rating of 4.6 in the RU-store and 1100 estimates with a similar rating in the US-store.

If you are suddenly interested in the plot, here it is so simple and painfully typical - there was a certain Dark Lord, who destroyed all life in the places available to him. But people are able to adapt even to difficult situations, so some handful of people survived, because they know how to hide, but then some brave people decided to fight back the armies of darkness. And then they started rebuilding the cities, encouraging the heroes and their heroic deeds, and that's when we get involved in the gameplay. Our role is mayor (or mayor, elder, whatever) of a town that has just been restored from the ashes, which hunters periodically drop in on. We do our best to make sure that these very hunters have a comfortable place to live and rest. Sometimes, we give hunters quests and buy loot back from them (sometimes even steal, but who's to say what). In short, we play from the other side, and it's fun.

From the beginning we are given a location - a new city, which we have to rebuild to the level of former greatness. The game constantly gives us quests, for the completion of which we get coins and items - the latter are needed to build buildings. So if we're short of some items, we go to the marketplace and make an order - for example, we need 10 pieces of wood, and we're willing to pay 360 coins for it (36 for a piece of wood). The hunters go on a raid, loot useful things and sell them to us, the town manager. And then we build a smithy for them, a tavern, improve the raktura and so on. We can also give quests to hunters in a separate building, telling them how many monsters to kill and what they'll get for it. But in general, it's better not to engage in self-will, and play on their own quests - so you'll quickly understand the rules of the game. 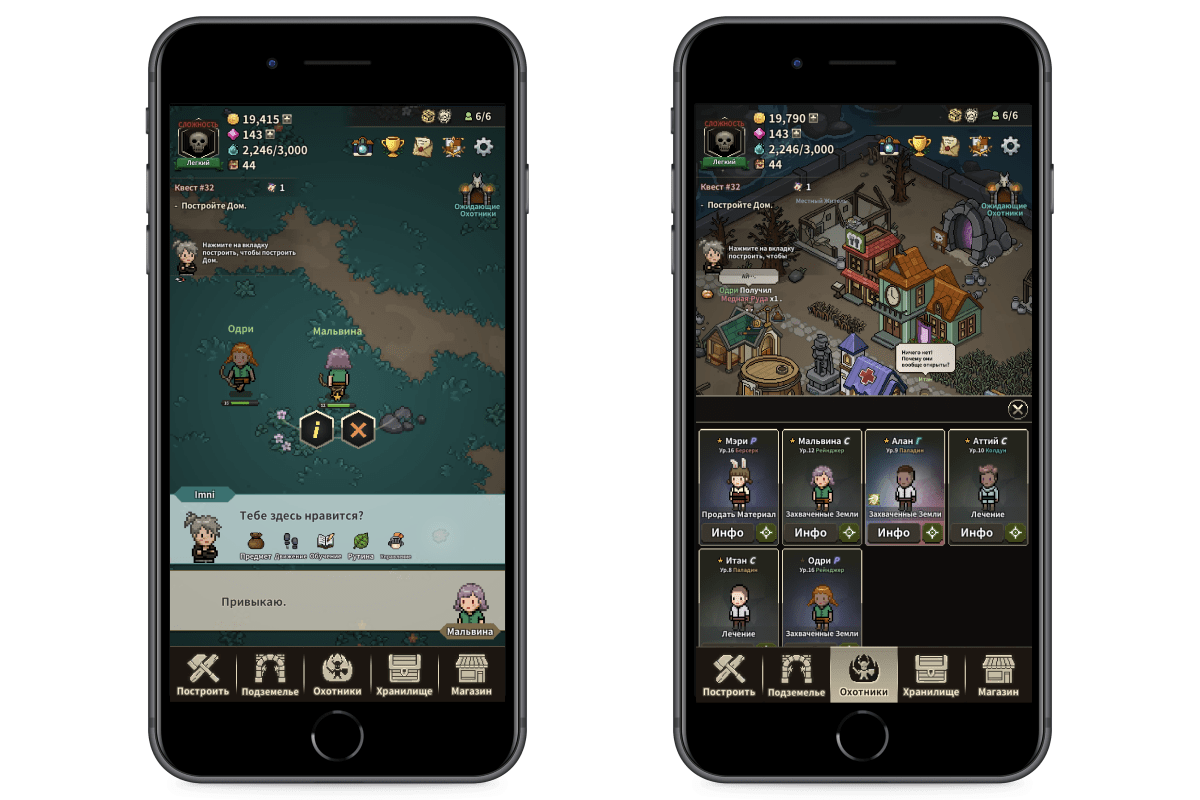 You can download the game from the App Store or Play Market, depending on which device you have. The game has been available for download for almost two weeks, and we in the editorial team were very surprised at how quickly it managed to gain such a good rating.

Hunters will come to your town at regular intervals, and their number depends on the level of the town hall and the number of buildings already built. For example, your town can hold no more than 7 hunters - everyone else will be waiting for their turn in the cave. So, each character has his starting characteristics, and already at this stage you should responsibly decide who should be allowed to enter the town and who is better to chase away. You can also kick hunters out of the city, who are considered your guests.

Keep in mind that Evil Hunter Tycoon is an RPG, so each character in the game is pumped and controlled point by point. This means that you need to periodically equip your hunters with weapons and armor, send them out on raids and upgrade their skills. Each hunter also has a health, satiety, mood, and endurance scale. Once these scales run out, the hunter becomes less effective; build taverns and restaurants to allow hunters to regenerate. 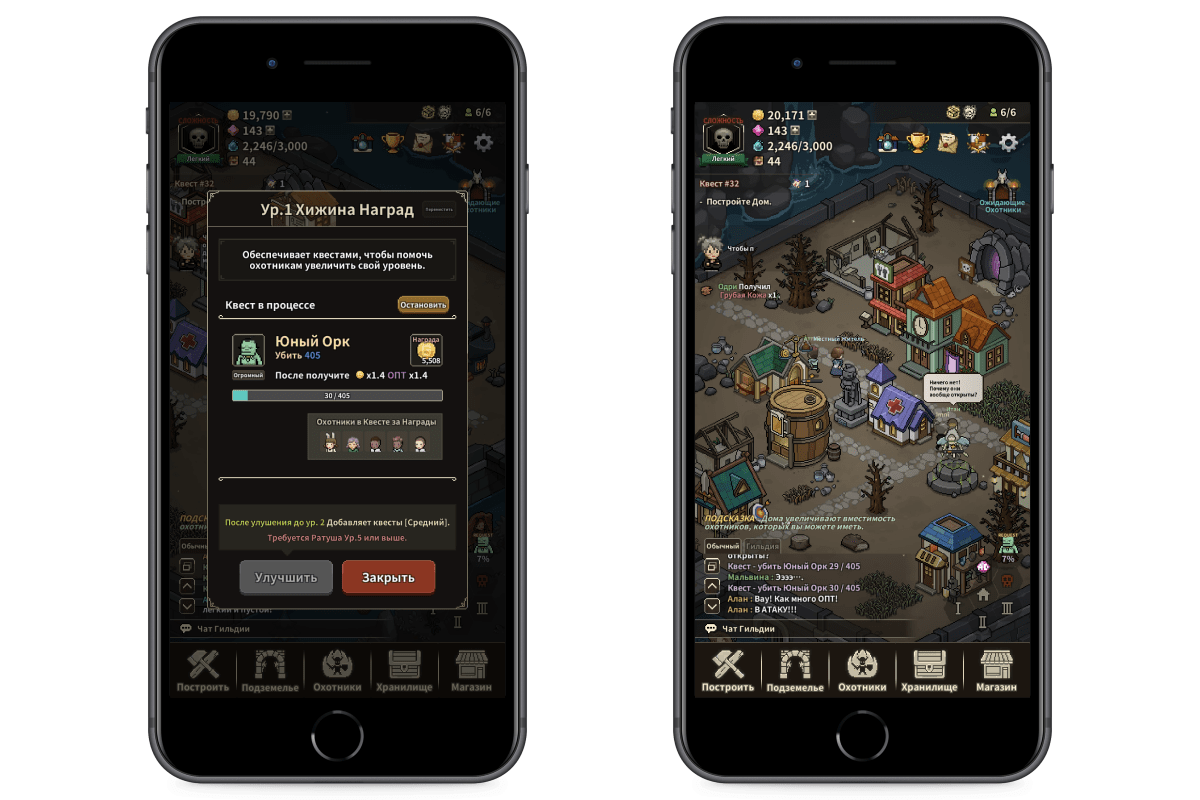 I've already talked about it above, but I'll say it again - do the quests in the game and do not let everything go on its own. This way you'll get to know the game faster, understand the main game features and generally begin to navigate the terrain.

Farm loot in the surrounding area is possible, but I would recommend sending hunters to raid in a dungeon - as practice shows, they and experience will gain faster, and the items fall out there better. This can be done in two ways: either by clicking on the dungeon and selecting up to 5 hunters to send, or by selecting each hunter point-by-point and sending them to the raid. The first option, as you understand, is easier.

These ingredients should always be available, so when you start playing, order 15-20 of each from the Marketplace. This will help keep your hunters in shape. The second option is that hunters are farming sloppily, some items don't pick up. You can keep an eye on them and pick up the loose loot - a small savings, but still nice.

The only problem, in my opinion, is the inability to farm offline. You always have to play an active game, otherwise your hunters won't do anything. So you can't give out all the quests and roll up the game for a few hours, you have to be in it all the time, and that's not very convenient. If the developers had added this to the game, it would be much more interesting to come back to it again and again. But sitting in Evil Hunter Tycoon all the time is exhausting, even in quarantine.