The game became popular even before its release, i.e. almost all of 2019 it was talked about and waited for. After its release, it became something of a benchmark. And when games like BDM are released in 2020, they are always compared to it. And it's understandable that it's not perfect and there are a lot of flaws, but people play it and enjoy it. That's why I wrote this guide.

Contents hide
1 Easy Quick Start - Guide, Tips & Tricks
1.1 Which class to choose?
1.2 Getting the First Mount
1.3 Bosses
1.4 Camp management
1.5 Where to spend black pearls
1.6 Shakatu Shop
2 A little more insightful video guide on PMs.
3 How to earn silver coins
4 Secrets, loopholes and bugs in the game
5 Task list - every day, every hour and before going to bed
5.1 Things to do every hour
5.2 Daily assignments
5.3 All tasks before bedtime
6 Enter the code in the game and get 50 ancient gold for free

There are five classes available at the beginning. More classes will be added starting in 2020. There are currently more than 11 classes in Korea.

Which class to choose?

In BDM, there is no rigid class binding. Each class is playable at any stage of the game. I recommend choosing a class that you enjoy playing, in terms of combat mechanics. Although slight differences do exist. At farm archer and sorceress show themselves a little better. In PVP a little better warrior and valkyrie. Barbarian - the middle of the half.

Go to in-game learning. It is important, it will introduce you to the mechanics of the game, the interface, controls and other important aspects in the game.

Concentrating on passing key missions. The side quests are interesting, but they don't give many rewards.

Autoboy Not available immediately (at level 13). It opens as you go through the story. And it's also not available when the dungeon is passed the first time and the quest bosses, and rightly so.

First free pet you get practically at the start. Who you choose is not important. They will collect the chests. Here I will stop in detail. From mobs falls the usual loot and chests. Chests glow orange and can be opened by touching them with your finger, so the same procedure do pets. But (attention) every 1.5 - 2 minutes. That is, quite rarely. And that's why The maximum number of pets that collect chests is 3, just so they can pick up chests more often on farm. Not once every 1.5 minutes, but once every 30 seconds. Increase the quality of pets can be their merging, ie 2 white pets - will give a green (with some probability), two green - blue, and so on. Don't forget to feed. Food is bought from a vendor in town.

Getting the First Mount

At level 7 you will get first horse. They are needed for faster movement, as well as to obtain a buff (increase characteristics).  To get the buff, you have to summon a horse (horse 🙂 ) and press the button.  The best buff is on attack. The higher the level of the horse, the better the buff, pump in the stall in the Camp. 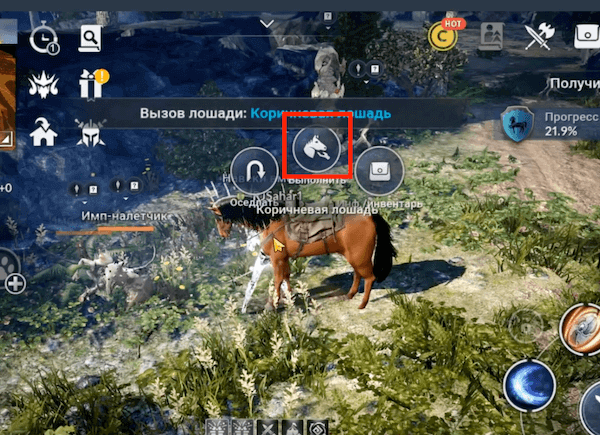 Black Spirit is pumped up by "feeding" him various kinds of equipment, jewelry and weapons.  I recommend all weapons and armor to feed up to the gold level of armor, but jewelry only white. The rest should be saved, because you need it to pump up.

Before you go for the boss, and the first boss is Red NoseI recommend sharpening all green clothing to the maximum, and give the black spirit to absorb all unnecessary equipment - all this will increase the damage of the hero. For the victory over each boss is given a gold coin. Spend it in Shakatu's shop. The higher the level of the boss, the more coins. Attempts to fight the boss are earned through tablets, which can be foraged by completing tasks of the spirit, farming and just quests.

In the camp, hire workers to the maximum. Don't spare any money or influence points. It's better to get cheaper workers. They work the same way, but the influence points we buy them for, we'll need them to buy relics.

Each building Pump to the max. - They are an important part of the economy in Black Desert Mobile. Add workers to the merchant's yard as much as possible for efficiency. The decorating workshop is a bit of an amateur. Ranches are better to raise sheep - they make more profit (milk for workers and wool, which can be sold for 500k coins). The processing shop is one of the most important buildings, there are created points, which are used to strengthen the items.

Gathering Resources. At first, the world's boron will be unavailable. Then it will appear. The most efficient gathering is the 2-hour gathering. In terms of time/collected resources it is the best. Overnight, understandably, it is better to put the gathering for a longer amount of time.

When the Merchant's Yard appears, there will be an opportunity to play Node management. You can use the node to mine various materials: crafting chests, various sharpening pebbles, gold, ancient slabs, and of course silver. It's really cool, but collecting firewood and stone is the best thing that could have happened to your workers early in the game. They have to gather resources without pause. The only reason to go into the Node sometimes is for the free stuff that pops up on the ground from time to time.

Don't forget to pick up daily rewards for being in the game. As you pump up the black spirit, they will increase. And every week the developers are adding more and more new events, which, one way or another, you will need to perform every day in the game.

The most important and expensive resource in the game is pearls. Black (blue) pearls You can get them from the game, and white only through donate, so spend wisely. Black pearls are farmed through quests and such a concept as Knowledge. The more knowledge is open, the more black pearls earned. Opened by exploring, killing new mobs, finding secret places in the game, and so on.

Where to spend black pearls

At first, of course, we save up. But over time, in the costume jewellery store you can buy blue and gold costume jewellery. Hope for the fact that it will fall out in the game is not worth it. And there is no other way to get it in the game. So on KD (8 hours) come in and buy for your class.

The easiest and fastest way to get silver and pearls at the beginning of the game is arena. Do not neglect it. In addition to silver and pearls, it gives a lot of achieves, for which a lot of rewards are given.  You enter the arena through the menu.

I recommend that you join the guild. From useful there - communication, guild buffs, guild bosses with good loot.

Fishing gives experience and does not take energy (as opposed to collecting resources). To start fishing is very simple - you need to enter the water up to your knees and automatically in the lower right corner will appear fishing button. At level 55 fishing is given +10% to drop things. Actually for this is pumping fishing to the maximum.

Shakatu Shop - One of the best ways to get a good piece of kit at the beginning of the game. You can buy for gold coins. Gold coins are given for passing bosses and ruins.  From there, one buys both purple and higher, all the way up to ginger.

The best option is Camp. If there's not much online, Black Spirit and in third place is Battle.

I also recommend for blue pearls to buy increased weight bearing - 310 pearls and increased inventory for 100 pearls and for 100k silver. Then, in the course of the game will come across things that increase the weight carried, but buying from the store, the extra will not be.

How to earn silver coins

One of the most painful questions is how to earn silver. First of all, we should admit that there is enough of it in the game and it is not necessary to bother with farming. Everything will happen by itself. But nevertheless, a few tips on this subject I can give.

Secrets, loopholes and bugs in the game

I can't tell right now if there are many such secrets, but I'll post as I find them and your tips in the comments.

Task list - every day, every hour and before going to bed

In addition to the daily tasks in the game, there are a large number of tasks that need to be done systematically. Here I will give you such a list of activities.

Things to do every hour

All tasks before bedtime

In the game there is an opportunity to get 50 ancient gold for free, which you can spend in Shakatu's Shop. For each code you enter you get 10 points. The higher the points, the bigger the reward (besides ancient gold there's material, black pearls, jewelry! (I got ears)). Reset - every week.

This is my code. You have to enter it: 9VKBJFEAPRSX.

You must enter here: Menu - Relationships - Glory - Enter Code (button). And be sure that you must be in the city. Not in the camp, not on the battlefield, not in the arena, but in one of the cities.

For the code both you and I will get 10 points each. And for the points we'll get 50 ancient gold. That's the minimum. The more people who join this game, the higher the rewards. Let's help each other. You can enter as many codes as you want. You get points both for the code you entered and for your code entered by another player. The situation is completely WIN-WIN.

Write your codes in the comments, I will enter them in my profile. And you mine and other players. Let's help each other.