[UPDATE 2]: In Europe. Wild Rift will be available as early as December 10, we are waiting and hoping for a good ping. Naturally, the beta test will also be in the CIS: Ukraine, Kazakhstan, Russia and other players from countries united by geographical principle will be able to take part in open beta testing. Hooray)

[UPDATE]: You can participate in the open beta testing of LOL Mobile! Here's how.

How to download and play Wild Rift - Open Beta Test

Right now Wild Rift LOL is in open beta testing. This covers the eastern region of the world: Japan, South Korea, and so on. At the same time, you can also play with anyone else from another region, you just need to do some manipulation.

Here's what needs to be done:

And, actually, some gameplay from the game

I was able to play, and I shared my impressions in the video.

What is League of Legends?

League of Legends, along with DOTA2, is fighting for the title of the world's most popular MOBA on computers. The point of the game is that the two teams are fighting on the Fields of Justice in a 5x5 battle, the real players control the heroes (Summoners), each of which has its own unique abilities. The task is to destroy the enemy Nexus (enemy base), to do this you must overcome obstacles in the form of towers and mobs that fight each other without our participation, and for their killing we get experience and gold. The map has 3 lines - the top, middle and bottom, there are neutral mobs, so depending on their location, players choose which characters to go where. And all this on computers or laptops. 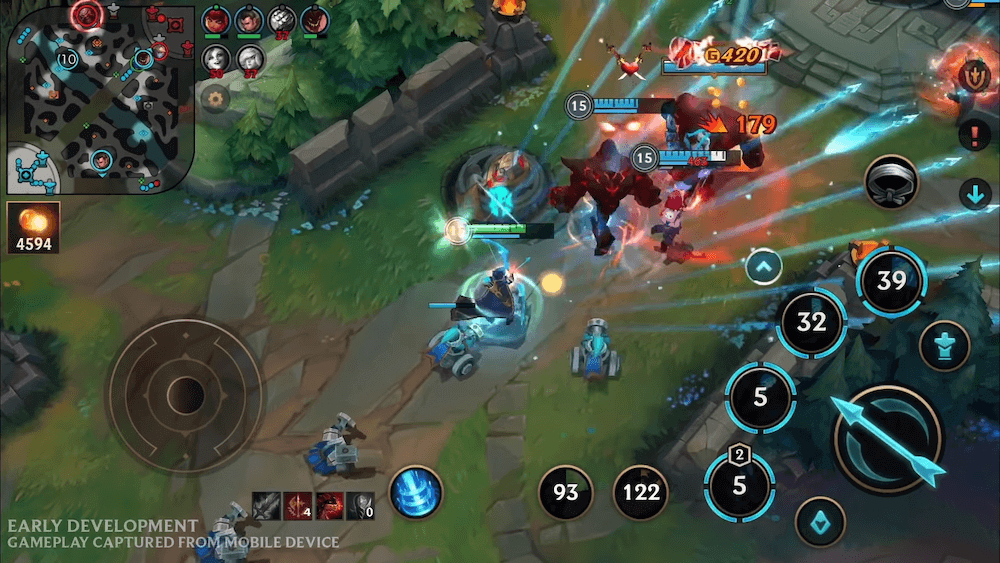 Everything is the same on cell phones, just a little simplified. Now in mobile MOBA The Mobile of Legends (for more details, see our Mobile Legends guide.), Arena of Valor, and Vainglory, which just recently made a complete redesign of the game engine. Now they will have to move, and maybe even leave the market, because the coming League of Legends: Wild Rift.

Review - What League of Legends Mobile Wild Rift looks like

While the League of Legends World Championship called Worlds 2019 is going on, the developers announced a mobile game. Apparently, it will not be a cross-platform game, but a standalone application, but (we really hope) with the old accounts. The number of towers per line was reduced to 2 (instead of 3 in the PC version), otherwise everything remains as before - the characters, neutrals, rotation and so on. So far, the client exists in pre-alpha version, it looks like this:

Controls are very similar as in modern competitors like Mobile Legends or Arena of Valor (and now Vainglory, which have recently made changes in this component of the game), but there will be four magics. It's going to be pretty hard to manage. Characters like Fizz, Zed, Ari, and others, who are demanding for skilshots, will probably fly out of the mobile meta or will be taken very rarely, because they are difficult to play even on PC. But the transfer is as close to reality as possible, and that's cool.

And an in-game video

As you can see, the game's graphics are not inferior to modern MOBAs, and somewhere even superior. Skills and movement controls are nothing new. We see the familiar movements and different mechanics of heroes from other MOBAs. Of the main things we noticed: each hero will have 4 basic skils, not 3 as usual, removed the separate buttons to attack Mobs and Towers (although I think it's a matter of settings).

When League of Legends comes out for mobile

A global release is scheduled for early 2021 (formerly late 2020), but RIOT Games is avoiding naming exact dates. It is understandable - a project of such scale is difficult to drive in the time frame, but we are all very much waiting for the appearance of this game on mobile devices. Moreover, the covid-19 epidemic also prevents the game's release, so the postponement of the launch is justified.

In our minds, we worry about Mobile Legends, Arena of Valor and Vainglory - it seems that these companies will soon have to look for a new job, because an incredibly strong competitor is coming to the market.

How did you like Wyld Rift? Did you get to download and play the open beta? Write in the comments.

Wild Rift LOL - the most comprehensive guide to the game, cool tips for beginners