Most people play mobile games in the toilet - this is not a joke, but a study by the Daily Mail UK, a pretty serious publication. It turns out that there are as many as 56% playing in the restroom (the other 44% are probably sitting on Tinder). And today we present to you a selection of The best toilet games for 5 minutes (in our opinion and not only) that you can play while sitting on a point - it seems like it would be the most trashy content on our site.

First, let's be clear about the Daily Mail piece - the article doesn't say exactly how many people participated in the survey, but it does have an age range of 18 to 24. Frankly, I wish the focus group had been a little more age-appropriate (at least under 50), but it's unlikely that the older generation would be that outspoken. Here's the percentage information: 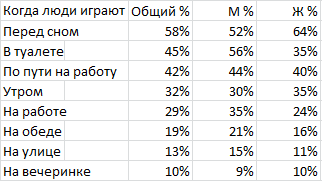 In our opinion, "toilet games" must meet the following parameters:

By the way, we are not the first to think about what games you can play in the toilet. For example, one website in 2013 (now apparently it is not working) made a small rating, and highlighted these applications - we, by the way, fully agree with him, but added our recommendations:

Games for 5 minutes - for the toilet

A top game that makes everything intuitive - from the bottom of the screen fruit is tossed, and after a while it falls down again, and we have to cut it up with swipes. If you manage to cut 3 or more fruits at the same time, we count the combo. The game has several modes (classic, arcade, zen), a bunch of blades with special properties, cutting boards. Really cool game where you can completely turn off your brain and enjoy the gameplay - the game lasts a minute and a half, it's perfect for the toilet!

Another iconic game that has been firmly rooted on every iPhone in the world since 2013. A nice and simple puzzle game about how you have to deliver a lollipop hanging from ropes to a little monster named Am-Yum. You have to cut the ropes with swipes in a certain sequence - almost all levels can be completed exactly as long as you need, there's no need to hurry anywhere. Except for a couple or three, where you have to cut ropes at speed, but we recommend leaving them for a more appropriate setting.

The legendary Angry Birds is a perfect candidate for the title of the best toilet game. You don't have to think too hard - throw birds at the green pigs' defensive redoubts and earn points. Of course, perfectionists want to pass all levels with 3 stars, but the average person does not need - for one "session" you can go a couple of rounds. Going through Angry Birds at such a leisurely pace is great - there is no exciting plot or time limit.

An old platformer is what games of this genre should be. A great game that raised the bar for mobile arcades in 2011, it still continues to be interesting today. It may not have as cool graphics anymore, and the developers update it very rarely, it continues to be top-notch so far. It has very simple gameplay and you can control the character with just one tap. By the way, Jetpack Joyride is a great check for oolds, if you don't know anything about it, you probably have never had an iPhone. Speaking of which, this is the first endless game on our list, so you can finish it at any time without fearing for your game progress.

Another gaming mastodon - this game was fought by players of different ages and on different platforms. By the way, PvZ was perfectly ported from PC to mobile devices - it turned out that the process of planting can be perfectly adapted for touch controls. We recommend not playing more than one game at a time - we didn't come here to play, after all.

What didn't make the 2013 list, but we personally recommend:

You won't believe it, but it's a really good five-minute game. Why - quickly gathered resources, sent the team on a mission, scattered the inhabitants in the training rooms, the rest can happen without our intervention. After a while came again, repeated the above steps. To avoid a long description of the gameplay, we recommend reading our review и Guide.

The best rander of all time, and we are ready to sign off on every word! There are only 3 lines, you control your character with swipes (not tilts), and the protagonist only runs straight ahead. You can play in any position (you can't do that with Temple Run) and in any location. Add to this great graphics, good physics, and monthly support from the developers, and you have a recipe for success. This is, by the way, another endless game on our list, so you can stop playing it at any time.

Another "ooldy here" test - we need to throw crumpled sheets of paper into the basket with swipes, and each time we will be interfered by a fan, so the throws must be corrected for the movement of the wind. The game appeared in 2009 and was also installed on almost all iPhones at the time, continuing to be a great arcade game to this day.

A very cool game in which you have to make decisions on which your fate as a ruler depends. It's intuitive and interesting, but you'll have to play it a little longer than usual. If you haven't tried Reigns: Game of Thrones yet, we highly recommend you to try it - here is our Guide on the endings.

A great strategy from Supercell - one round lasts a maximum of 4 minutes (3 minutes of main time and 1 minute of extra time). To briefly explain the essence of the game - each player has 3 towers (a royal tower and two regular towers). The player who destroys more towers, or destroys the royal tower wins - this is an automatic victory over the opponent. To do this, you need to assemble a deck of 8 cards - units, buildings, and spells that can be used for an elixir that regenerates over time. We already have good material on the gameAnd here's a little video on how to make decks in Clash Royale:

Originally a browser-based game written by a 19-year-old programmer, 2048 quickly gained popularity among all arcade fans. The idea is that we play a 4x4 board on which tiles with a face value of 2 or 4 (90% and 10%, respectively) appear in random order. You can move all tiles with swipes, and if tiles of the same face value overlap each other, you get a tile whose face value is equal to the previous two. The goal is to assemble a tile with a rating of 2048. In practice, it is quite difficult.