My love of reading and the constant search for something interesting led me one day to the book games, or as they are also called - text-quests. I came across them by chance. These were rare books, sold by booksellers for fabulous money, and shabby, worn-out, single books, resurrected from storerooms and garages, sold by various people from all over the country. Now such books are practically never republished, and new works in this genre are written in small numbers. Whether the authors do not know the technique, or publishers do not see the prospects, or the reader is not interested. And in vain! I found a couple and, of course, bought them, but that was before I was introduced to text quests on the iPhone.

I will first tell you about what I really liked: the gripping plot, the literary syllable, the direct participation of the reader in the events, the ability to "replay" the ending, if the outcome is not satisfied. Everything would have been fine if it weren't for the constant flipping of pages back and forth. Since you are the main character in the story, you choose the further course of events yourself. Let me explain:

I really wonder if your intuition will let you down.... 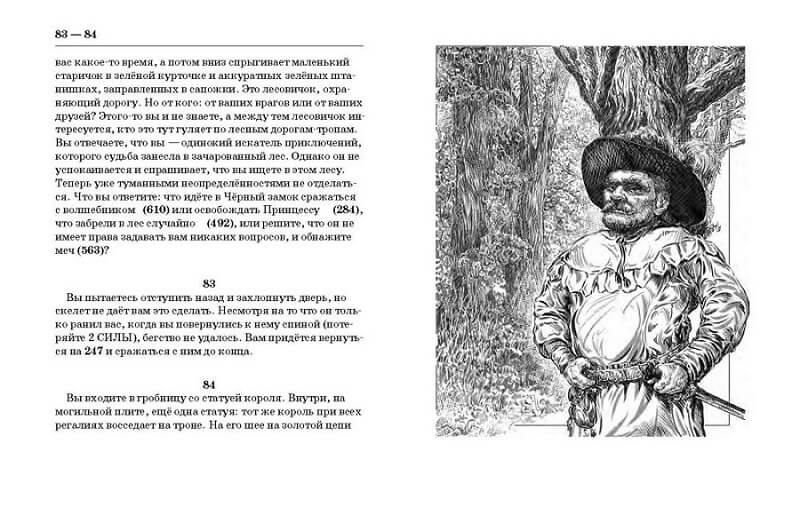 It would have been fine except for one "but. I was terribly uncomfortable digging through the entire book, losing the thread of events and involuntarily looking ahead or reading through both suggested transitions. This is a definite minus.

And since I don't like to clutter up my space with printed books, I downloaded a couple of copies into an e-book. This turned out to be even worse: I had to constantly enter the necessary page into the search bar. After a while, I finally got tired of it and turned to the Apple Store with the question, "My light, tell me, do you have something like that?" Fortunately, the store gave many positive answers. The surprise to me was that in the book version they are an endangered species, but in the mobile version they are a thriving and rapidly multiplying one.

It's just a matter of choosing the right text quest.

Some text games are works adapted for gadgets by famous authors, previously published in book form. Others are specially written for a particular program. Their common advantage is that the transition from one page to another is automated. That is, you only need to click on the correct in your opinion answer or the desired continuation, and the reading continues.

In order for you to understand the idea of such text games better and get more interest in them, I have selected three different in idea and different in implementation. But, frankly, I do not even want to open all the cards, you can not be fully captivated and enjoy the game.

This is the first quest that I went through. It's good that I started my acquaintance with mobile text quests with this one. Went through it all day (in my spare time) and half the night. I just couldn't tear myself away. The scenario is well thought out and logical. Interesting and unusual design: when you start a game in front of you appears improvised messenger message from a friend with the proposal to participate in a real quest. She says she won two free invitations and decided to take you along. A correspondence ensues between you. The friend, named Soroka, explains the conditions of participation and says that the quest will take place out of town in an abandoned mansion. There will be several other participants with you. All of you will compete for the main cash prize.

For you, the quest begins when you find yourself locked in your starting room in total darkness. Your friend, having solved the first task not without your help, makes her way to the lobby of the mansion. You're constantly guiding and prompting her. She is your eyes, you are her brain. You keep in touch through the phones. The mansion has a spooky story of its own: a couple lived there, leading a social life until the husband went mad with love and jealousy of his wife and locked her in a "golden cage," shielding her from the world. This is the basis of the entire quest. But not everything goes according to plan. Soroka, while inspecting the mansion, discovers the corpse of one of the participants...

Your dialogues with your girlfriend occasionally end in pauses (for example, when she goes from one room to another). These pauses can be avoided by paying a small amount of money. But they did not embarrass me at all, but on the contrary, made the passage more realistic and exciting. That is, not everything depends on pressing a button, you also have to wait at certain points, events develop in their own way.

The quest is very atmospheric. I experienced all the events as if I were in the place of the characters. After the unfortunate ending, which upset me, I was able to change it. All I had to do was press the "replay" button. With a sense of accomplishment and complete satisfaction, I began to look for my next text quest.

Where we were not 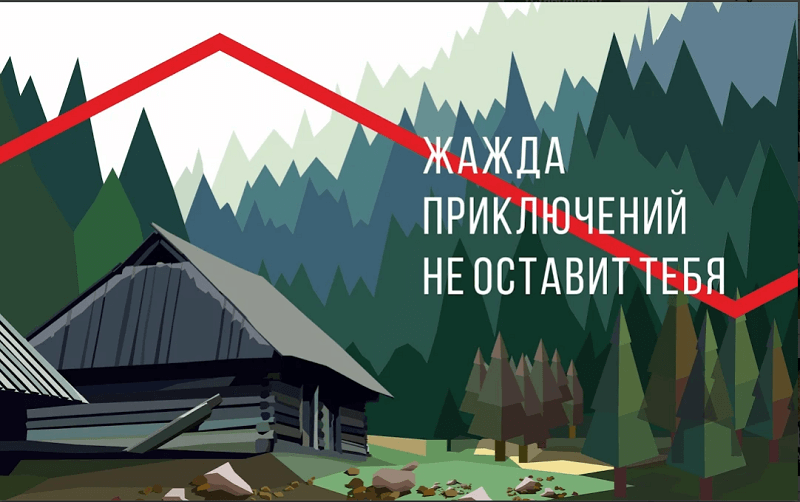 Attention all who are fond of archeology, excavations and expeditions! This text quest is for you! The plot begins with the fact that the main character Adam, who went on an expedition alone, loses all his equipment due to bad weather. From this moment his adventures begin. As events unfold you will discover the true motives of the young explorer, you will learn the history of his formation as an archaeologist, together with him you will meet new people, you will look for artifacts and investigate the unfinished business of his father relating to the mystical Valley. The whole quest is very realistic, but at the same time pervaded with unexplored and incomprehensible to the human mind facts and legends. The hero will try to find the gate to another world, where lived or even now lives, another civilization, more perfect and powerful. Will he succeed, how will the search end, will new acquaintances become friends or betray ... You'll find out only when you will immerse yourself in the atmosphere of the quest and act on behalf of Adam.

In addition to the fascinating text and the constantly before you a choice of actions and reactions in the quest has a task: to find objects in the picture, to find a way out of the cave, to complete a puzzle.

It's not just a dry text quest, it's an illustrated and voiced virtual reality that you immerse yourself in. I really liked the graphics. It reminded me of coloring by numbers. Also, it is not always static: change the color of the sun, it becomes darker or lighter. At first glance the music may seem monotonous, but it certainly adds charm to the quest, creates a mystical atmosphere and enters into a state of anticipation and anticipation of events. For this quest was created 11 different compositions, each of which is its own magnetism. In the quest you can affect not only the course of events, but also change the text size, line spacing and transparency level of the background, sound volume and font.

The developers did their best! They described the terrain of the Altai Mountains very vividly and colorfully, as they themselves were not once participants in similar expeditions. This text quest is available for free download, if you want to remove advertising - pay a token amount. The extra episode is also not free.

Dungeons of the Black Castle

Another bright representative of this genre. This text quest has its own distinctive features. Indeed it does! It has little resemblance to the previous two. The author of the work, which formed the basis of the quest, is well known in narrow circles of fans of interactive literature. "Dungeons of the Black Castle" is the debut book by Dmitry Braslavsky, recently transferred to the platform of mobile devices. This text-based quest has the least literary background, the characters are poorly drawn, we can say that they are not endowed with vivid features. The only lyrical digression awaits you in the backstory.

There is a little backstory in this quest that will help you get into the spirit of the events described. The forest of the fairyland was enchanted by an evil wizard named Barlad Dart. He wanted to marry the princess, but, having been refused by the king, he ordered his messengers to steal the princess and bring her to the Black Castle. Many brave men volunteered to rescue her. But none returned from the enchanted forest. Perhaps you are the lucky one who will bring his daughter back to her father and come out of the forest unharmed?

This quest was the most difficult for me to complete, compared to the previous two.

I liked the design, it creates an atmosphere of magic and fairy tale. The pages of the improvised book are styled like ancient scrolls. When you choose the wrong path, the page is flooded with drops of blood. Creepy, of course, but atmospheric.

The peculiarity of the application is that you can fight with the opponents, there is such a battle by throwing dice. In the settings you can set the automatic throwing, so that each time not to unwind manually. That is, you always have a chance to win if luck is on your side. By the way, the level, strength, agility and charm you also determine with the dice at the beginning of the game, they will be the basis for your survival. The strength is replenished with food. Your opponent, whoever he is - dragon, garrass or other dark creature - always has certain characteristics: strength, dexterity and loyalty, which gradually decrease in the fight if you manage to throw a higher number on the dice.

During the quest you will meet different characters. Not everyone will lure you into a trap, there will be those who will kindly help you in a difficult moment, sell or give you things you need for the game. There's room in this text quest for magic, too. On your way to the Black Castle, you collect various magical items, putting them in your shoulder bag by pressing a button. You can use it to overpower enemies by creating your own copy or to heal yourself miraculously. The developers claim that only half of the users make it to the end of the quest. Do you think you'll be one of that half of the winners? I'll give you one piece of advice: memorize the course of the game and save yourself in controversial situations.

Despite the fact that I have described in detail each of the text quests presented, it is better for you to download and pass at least one. So, you'll be able to understand whether it's yours or not, whether it's catching you or leaving you indifferent. What-me thinks that once you started, you can not come off. If you think otherwise, go to page 1 of this article and read from the beginning. If you agree, go to page 2, pick a quest for you, download it and play it!

Manor Matters: an object search game that you want to play for hours

Drain your dried-up brain - play word games on your iPhone