Facebook
One of the most popular mobile MOBAs continues to delight. With DC's permission, introduced a new superhero into the game, in addition to Batman and JokerThe clown prince of crime, the defender of all the disadvantaged, Superman, the Man of Steel, was introduced. I tried him out in a few battles, and he's a beauty. But the details are below.
By the way, just today the Arena of Valor was nominated in the Game of the Year 2017 according to Google Play.

Download for free Arena of Valor from the AppStore 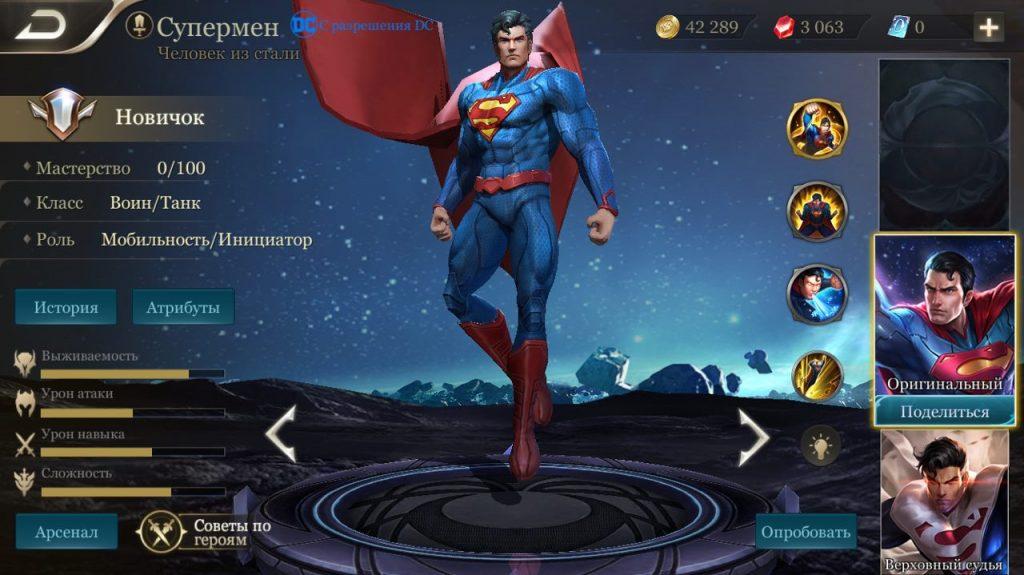 Information about the hero Superman

Survivability - at the level of 80%, on the account of the abilities can escape

The hero's skills and abilities

Superman can be in two forms: liquid and gaseous :), a joke, he can walk and fly. Can fly as soon as energy bars are restored to 100%, flying mode increases movement speed by 20%, and normal attacks deal extra damage equal to 12% of health points. This form can only be knocked down by a controlled attack.

Superman attacks with icy breath (!!!?? seriously, icy?), dealing physical damage and slowing the enemy for 1 second. It's not a ranged attack, alas. In flight mode, it attacks harder + adds damage from lasers, so attack wisely.

Like the Joker, the second skill is our save. It removes all controls and increases movement speed. If you use Man of Steel in Fly Mode, Superman hits the ground with his hands, which throws enemies away, removes control and adds movement speed.

Superman absorbs the power of the sun, boosting the energy charging speed of 100% for 10 seconds. This mind can only be used during the day, it doesn't work at night. I checked. There is no sun. If you activate this in flight mode, then on top of all the skill also throws enemies. All in all, a kind of ability to keep energy at 100% = flight mode = increased damage.

Tactics and tips for playing Superman