Forget the pointless stomping around with a map in an unfamiliar country, forget about sign language and mooing worthy of Robinson Crusoe's sostrophes. Now it's easy: there's an app Google Translate for iPhone. All you have to do is enter text into it (you can type it or even just dictate it into the microphone), and in a second the program will show you the translation. And if you wish, it will also say it out loud. 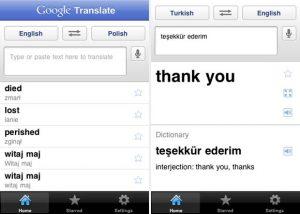 For example, after making sure that the application is in Russian/French translation mode, type the text in the special window, or tap the microphone icon and say the text out loud. For example, say to your iPhone "where is the train station" and a second later the phone will display "où est la gare". By the way, the phone will let you talk for about 5 seconds before you start translating (and the text is limited to 100 characters), so it is better not to burst into monologues. You can press the icon with the speaker to make the application synthesize speech and in Paris you will be heard, understood and directed. You can even switch the translation to "reverse" mode with the corresponding arrows, so that the application "hears" the answer and translates it into your native language.By the way, the speech translation feature is available for 24 languages - Arabic, Chinese, Czech, Danish, English, Finnish, French, German, Greek, Haitian, Creole, Hindi, Hungarian, Italian, Japanese, Korean, Norwegian, Polish, Portuguese, Russian, Spanish, Swedish, and Turkish. In this case, the app displays a speaker icon to the right of the translation and pronounces the translated text in a rather pleasant (though artificially synthesized, according to Google) voice. For an additional 34 languages, including Azeri, Irish, Swahili, Thai, Vietnamese, etc., the app will only do text translation. 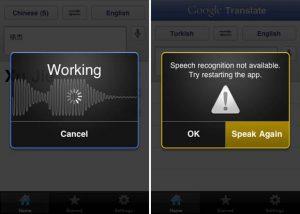 Additional useful features include the ability to enlarge the translation screen using the arrow icon. It can come in handy in crowded and noisy places, when the person you are addressing may not hear the voiceover, but it will be easier to read from the screen.It is also important to remember that you need Internet access for the application to work, but you can save the most frequently used translations by clicking the star icon next to the translated phrase, and then you will have access to them off-line as well. You can do the same for spoken translations: in case the application has already spoken the translation, the audio file is saved and available. 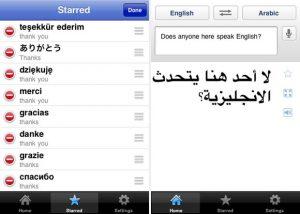 In addition, even if you have not specifically saved translations, a list of the most frequently used phrases will pop up when you click on the Home icon at the bottom of the screen. The translation history can be deleted in Settings/Settings, if necessary.Author: Olga AgrbaDownload Google Translate