Admirers Apple Looking forward to April, because it is the month when the smart watch is scheduled to be announced Apple Watch. We have decided to present you with six of the best, in our opinion, apps for the new "apple" device.Pinterest 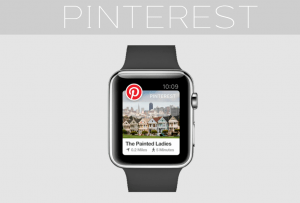 Developers of the popular social network Pinterest have provided their smartwatch app Apple an interesting feature. As soon as you find yourself near a place you've previously recorded, you get a notification about it with hints of the route and the estimated travel period. Convenient, isn't it?Home remote 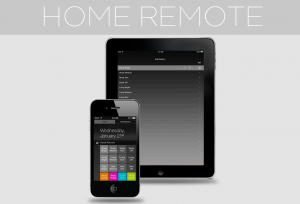 This app brings the idea of a smart home even closer. With the new watch from Apple This technology comes in the form of coffee machines, kettles and thermostats that can be controlled remotely, adjustable lighting and temperature, doors and windows controlled directly from the display, and other smart home appliances.Facebook 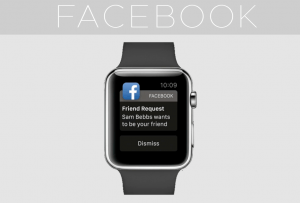 Well, where would you go without your favorite? Facebook? During its fall presentation, the company Apple demonstrated only a nice, but rather standard notification concept. I really wish the app had the ability to scroll through the news feed using the Digital Crown wheel.Twitter 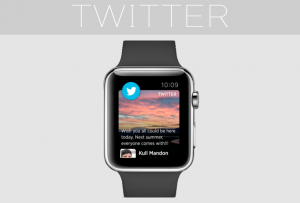 Without TwitterActually, nowhere, either. In its extension for Apple Watch The social network will give the user access to a feed with the ability to add a favorite tweet to their favorites or share it without having to reach for their iPhone out of my pocket.Nike Agree that Apple Watch It just begs to be worn on your wrist to monitor your physical activity and exercise. The watch is simply stuffed with various sensors. The Sports Giant Nikewho has long collaborated with the Apple and whose programs and products are the first to appear in Apple developments, did not pass by such splendor, offering a great app for the new watch. Among the nice things is the integration with social networks and the ability to monitor physical activity, so you can set your own records and challenge your friends to competitions.Clear 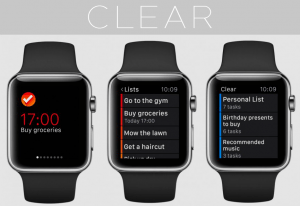 Clear - is a convenient and simple task manager that was created to get the version for Apple Watch. With synchronization via iCloud The app flips your notifications and tasks to the watch display. The version is specially adapted for the screen, but looks as stylish as the mobile version. All tasks are listed on the screen, where you can manage them with the usual swipe movements.

What's so special about Apple Watch

When and how to charge the Apple Watch