Is it worth playing Shadowgun?

As mobile trends continue to evolve and game mechanics open up new possibilities, Shadowgun War presents us with an online RPG shooter at its best. As we all know, adapting a genre to mobile gameplay is a difficult task, even if some mechanics are used traditionally. Every new good game brings something new and better, and this one is no exception.

I've been playing it for a while and I have to point out that I'm not particularly used to playing shooters on a mobile device. This has to do with the way they handle the automatic shooting aspect, which I'm not used to. But I have to say, I enjoyed Shadowgun War Games. The controls are more accessible than in other similar games, and the characters are drawn much more strongly. Read on to see what I mean... This game is developed and presented by MADFINGER Games. It is a studio with games such as Dead Trigger 2, Unkilled, and others. They also released Shadowgun Legends, a prequel to War Games, which was huge and extremely successful. On Android alone, this game has more than 5 million installations and a very good rating of 4.2 stars.

As for its sequel, the mobile game Shadowgun War Games - Online PvP FPS, it is their latest release and has a similar rating of 4.1 stars out of more than 80,000 votes. It has been downloaded more than 1 million times on both Google Play and the iTunes App Store, and generally enjoys positive reviews.

The characters are so different and unique, and this applies not only to their appearance, but primarily to the style of play... PvP-oriented shooters achieve their atmosphere mainly through competitive gameplay, and the story, no matter how deep it is, always recedes into the background. This is not necessarily different in this game, but the addition of colorful characters does help turn it into something more than just a first-person shooter.

The characters here are so different and unique, and it's not just about what they look like, but first and foremost the style of play. In fact, depending on which character you decide to play as, you may have a completely different experience, not only because of their different roles, but also because of their unique mechanics.

This game takes traditional gameplay elements from such PC games as Overwatch and Paladins... At first glance, it's obvious that this game, like its prequel, borrows traditional gameplay elements from PC games like Overwatch and Paladins. But the developers were faced with the challenge of fitting such complex and unique controls for each character on the touch screen of a mobile device, so they made do with extended options.

Under "Controls" in "Options" you can set the mode of fire to several options. By default, your character will fire as soon as an enemy target is near your corsairs. This is true even if you are using a controller. But you can choose between simple, single-point ADS, hip fire, and Custom Per Weapon, where you can customize manual fire for each of the many different weapons in the game.

And speaking of weapons, that's the main difference between the characters. Only a few characters are currently available, but MADFINGER Games often adds them with in-game patches and new content.

As of this writing, the following characters are available:

These 6 characters available to play now demonstrate sufficiently how different your gaming experience can be depending on who you choose. Each character has two weapons and two special abilities, ranging from grenades to various skills.

A classic all-purpose commando, with one medium-range automatic rifle and one semi-automatic rifle with telescopic sight. He has a grenade and a first aid kit as special abilities.

The Revenant is best suited for the role of tank, as he is bulky and very tough. He has a large health reserve and uses short range weapons, but with bursting damage. This hero uses two special useful abilities. He has "Roar", which slows and disorients enemies, and "Inner Rage" increases movement speed, damage dealt and damage reduction.

The character Sara serves in a support role. She is armed with a rocket launcher and can use her support abilities to help her allies: Healing Blast (a grenade that heals allies in the blast radius) and Protective Dome, which comes in handy in group battles.

Willow performs the role of a sniper. She is one of the best damage dealers with maximum damage and range. Of course, she uses a sniper rifle, and her abilities match her play style. She has a "Supercharge," which increases her shot damage, and a "Flash Mine," which blinds enemies coming at her.

Jet is a very fast and cunning character. His class is called "Runner," and he is a kind of short-range assassin. He uses his abilities to outrun his enemies, outrunning them before they can react. Among his abilities is the Time Rift, which transports Jet to an alternate timeline where he is completely invulnerable and can damage enemies. His other ability is Blink, which teleports him a short distance in the direction he is directed.

Daisuke is one of the latest additions to the list of characters. He too is a runner, like Jet, but he is not only fast, but also has more damage and some support with low range and health. He uses double pistols and katanas as weapons, and is trained in ninjutsu. His abilities include Tripple Slash, which uses his swords, and Tech Jammer, which disables enemy skills in a radius around him.

Each character has 5 characteristics, which include:

The balance between these 5 heroes and the combination of two weapons and two special abilities make each hero unique and have their own gameplay experience. The only drawback is that there are only 6 characters in the game at this point, but as mentioned, they are adding new ones quickly, and as of this writing, several have already been announced.

During a match, combat and gameplay take place in the traditional way. You appear with your allies and hunt down enemies in one of the 4 game modes currently offered. The game modes are as follows:

As mentioned, having different characters resonates quite loudly in each team, but there can be several of the same characters, which will happen often at this stage of the game. Outside of the match, the player sorts through his characters, makeup, you can buy things in stores, and check other things.

The models, the animation, the visual cues and everything you see looks amazing... This game has gone quite far in blending the genres inherent to PC, especially in terms of visuals. The whole game looks very close to its PC counterparts, such as Overwatch and Paladins. The graphics are terrific, and there is a wide range of settings to adapt it to different devices. The models, animations, visual cues, and everything else looks awesome to work on mobile devices.

The game can be played smoothly even on modern mobile devices below the average class... Despite the elevated visual style, this game can be played smoothly even on today's below-average mobile devices. I played it on 3 GB of RAM, a Snapdragon 430 and an Adreno 505 GPU, and the game ran smoothly. The game requires Android 6.0 or higher or iOS 10.0 or higher and about 1 GB of disk space, depending on the device.

Does the game require a donation?

This game is completely free-to-play. None of its aspects are paid for. This game is completely free. None of its aspects are payable. Microtransactions for real money only apply to cosmetic items, which do not affect gameplay in any way. The in-game currency used in other cases is earned during the game, and character cultivation can take some time.

This is a faithful sequel to Shadowgun Legends from the studio, which is one of the best RPG FPS games on mobile devices.... Shadowgun War Games is the faithful sequel to Shadowgun Legends from the studio, which is one of the best RPG FPS games on mobile devices. It comes with improved gameplay, improved characters and mechanics, and updated everything you need. It's definitely made for fans of the mix genre and is regularly updated with content. I definitely recommend it to everyone!

How to improve the gaming experience and gameplay... Although the game is relatively young at this stage, the community is growing. There are not many questions about the gameplay itself, as it is quite comprehensive. But players are eager to unite and play together.

How do I play with my friends?

Unfortunately, Shadow War Games is still pretty much in early access. Game modes and many other features are being added along the way, as are new characters. Thus, creating a match with friends is currently unavailable.

Currently, players can enjoy one of the 4 available game modes:

However, players manage to play together, synchronizing the exact time of the queue for the match, on the same server. You can use the game's official Discord channel or your own. The probability of being in the same match with this method is high, but it is still random.

How do I add friends?

Since there is currently no way to create a custom co-op match with friends, there is also no way to add friends to the game. As mentioned, most of the game is still in early access, and there are several game modes and features available.

The best thing you can do is link your account to Google Play or Facebook and hope for the best. Matchmaking picks up players randomly, and we hope to have a feature to add friends soon. You can select the server you're on in the Settings menu, under Servers.

Tips from a professional

These tips will not only improve your skills, but also spur your interest in the game. You can customize almost everything in the game to get better, except the characters' abilities and their weapons.

From the title it seems like a trifle, but in fact it is one of the parts that plays a crucial role in your gameplay. 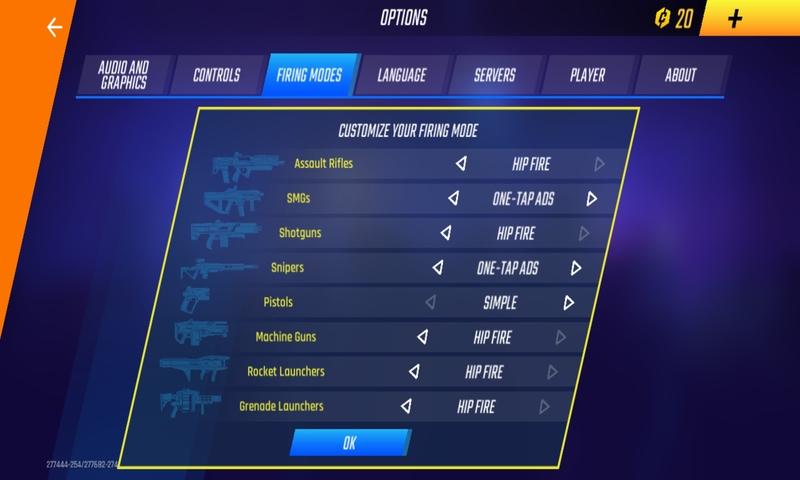 The rest of the settings are fine, but you can also change them if you want to dabble. You may find something useful. However, the default settings are best for "ADS Aiming Sensitivity", Sprint Sensitivity and Aiming Acceleration.

Control modes are about the weapons in the game. In the control modes, you can customize your fire mode the way you want. All of the weapon settings in the game are here, including the assault rifle, SMG, shotgun, sniper, pistol, machine gun, and flare gun.

All of the above settings are straight out of the professional player's book. Use them to outsmart your enemies and become a unified army for your team.

It's better if you use speed and damage boosters in the game as often as possible. Boosters increase your mobility and damage to enemies, which means you can kill more enemies faster.

You can find a booster in the game-this yellow and blue thing in the room. However, once you get the booster, it will last a few seconds. It takes about 60 seconds to fully recharge a booster. So grab them as often as possible and don't let your enemies get them either.

You can find it during the match; its effect is to reduce the cooling time of your abilities. It appears in different places in the team deathmatch. Once you pick it up, the regenerator fully recharges in about 60 seconds.

Use it only when enemies are closing in on you and your abilities are on standby.