[UPDATE]: We present you another draw list as of December 9, 2020. Just recently the Brawl Stars World Championship took place, according to the results of which (as well as after feedback from the gaming community) the developers decided to give nerfs to a certain number of characters. Most of all it was Amber, who was just some kind of broken, and dragged almost all modes. Gale, Brock, Max, and Mr. P. But first things first. 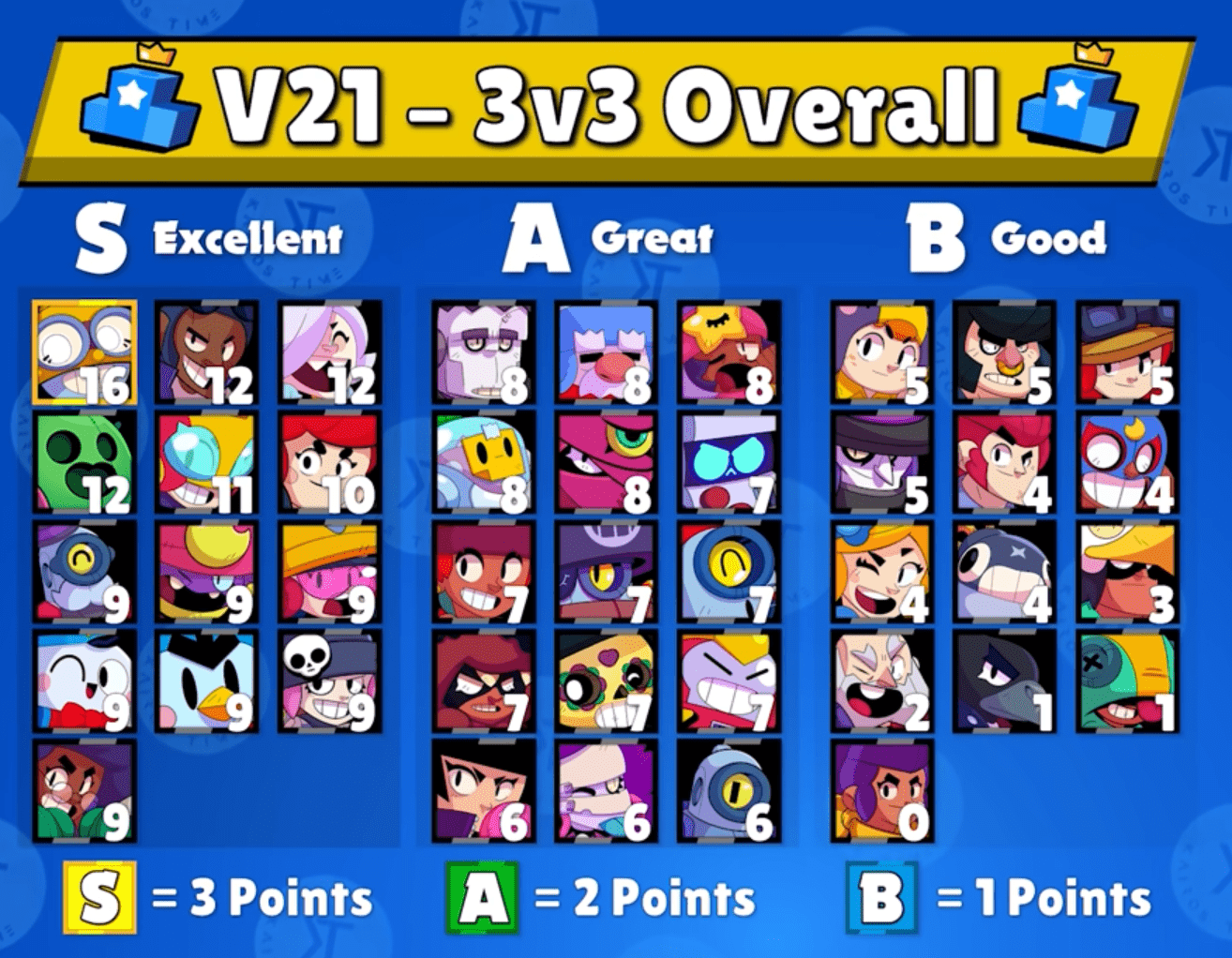 The best brawlers in December 2020 for capturing crystals are:

We recommend you to take a closer look at Karl - he showed himself perfectly at the last World Championship, doing a lot of dirty work. The distinctive feature of the character is that he is a tank with a ranged attack, which allows him to zoned the enemies, and after he accumulates a super, he can give a good roll on the enemy team. Carl perfectly uses the elements of the landscape, and good Carl should be able to do this, because his pickaxe can bounce off the walls, which increases its speed and affects the dps. And separately we should say about his gadget, which allows you to teleport to the place where the pickaxe is now - it increases the game change potential of Karl.

Well, since the meta in this mode is now moving towards rank-brawlers, you should look out for those who have good attack range and some control. Pam is off the list, but she's also a ranged tank, and her super will be very useful to the rest of your team if you decide to occupy the center of the map and control her.

Here's a list of the top Brawl Stars characters in December 2020 in brollyball:

In this mode, Carl and Tara are back on the shooting list as meta characters. The surprising thing is that Carl is the most independent character on this list, who can play solo and doesn't depend on the team's set-up.

Tara gets into the meter because of her excellent super, which stacks well with her auto-attacks and current meter characters Jackie and Carl. In general, Tara is a very interesting character who seems inconspicuous and even weak until you try to play her. She has surprisingly inadequate damage for her attacks, and coupled with a properly applied souper it can easily make all the difference on the map. All in all, take a closer look at Tara, she's not as easy as she looks.

There's no point in talking about Max separately, because her presence in the melee is logical - she runs faster than everyone else. So much so that she can get to the gate with the ball faster than the opponents can get sprung.

Here's who we recommend we take:

In the robbery, everything is pretty prosaic - the Rangers continue to be in the bag. Brock is especially strong, as he was incredibly useful at the World Cup - he was picked in almost every third game. Brock deals good, dense damage from his hand, has great range, and can also handle teamfights with a single well-used souper. So Brock's job in robbery is to try to damag the safe, to keep the main enemy damage dealers away from the team, and to almost always drain the supers into the safe.

And Carl, as always, is out of competition - for the third time in a row. He can't get close to his enemies or take a ton of damage after using his super, but Bull has lost his position, largely because he's become less effective.

The best bravellers in the bounty in 2020:

Brock, Nani, and Piper are the main characters used at the World Cup in this mode. The point is that our task is not to expose ourselves to enemy attacks, but to be able to kill someone to get a star. This role is best handled by a character that does a lot of damage from a distance, even if it's a single-targeted skillshot. Piper has been the best in this mode for a very long time, almost since the game began, and so has Brock, for obvious reasons.

But if you're confident in your abilities, we recommend taking a closer look at Nani. First of all, she has great burst damage, good range, and an unusual attack pattern. Which, by the way, you can use if you need to hit someone behind a wall or some obstacle. Secondly, Nani has a heavy handed stun, but you can stock up in the bushes and calmly take your bomb to the right or nearest enemy. Note that Nani gets stronger with star power - either you do 2500 more damage or you get 80% less damage on yourself. In short, try Nani - she has a very different gameplay than most brawlers.

Take a closer look at the following characters:

You'd be surprised, but the best brawler in this mode is Barley. There are several reasons for that - first, it's a good dps. It would seem how Barley can have dps in principle, but we are interested in the damage of a static cannon when your robot approaches it. If Barley gives all auto-attacks as well as his super, it will deal tons of damage to the cannon, and with the respawn in its immediate vicinity, it will deal even more damage to enemies. Second, Barley has pretty good bolt control - the team can stand on one side (or two) and loot bolts, and the other side can control Barley himself. Of course, he won't be able to do lethal damage, but anyone who comes for a bolt can be normally trafficked.

Take a closer look at Gale as well - good players know how to cast the enemy with a souper towards his cannon, which will easily shoot anyone who gets within firing range.

That's who the brawlers we recommend:

And then Colette bursts into the meter with an ulta and stays tightly in the top, being almost the best peak in this mode. Here we need to take into account the fact that some tanks are no longer relevant (like Bull or Pam), largely due to the fact that they can easily control through the wall and knock them out of hot spots. Well, and remember the meth of the rendezvous. So most of the playable characters are long-range squishies, which Colette zoned perfectly.

Well, it's finally time for Bea, too. She's very strong, and it's strange that she couldn't beat out Piper or Brock in other modes. There is an assumption that her effectiveness in team disciplines is slightly less than in solo, where she can really blossom, since she doesn't contribute the same damage and ulta impact. But she is always unpleasant to play against, even though her projectile flies very slowly.

The strongest brawlers in 2020:

In a paired encounter, the goal is slightly different, you can just avoid obvious fights and try to pick up a few cans near your first respawn. So we're interested in characters who keep their distance and can deal good damage from the hand. Bea, unfortunately, does not fit this format. So let's look at the same Carl and Brock, as well as Max.

Several famous players and bloggers decided to compile a shooting list, in which they assigned points to characters depending on their hitting one or another shooting range. We'll highlight 6 heroes worth paying attention to, that is, to purchase and pump up to level 9 to unlock star power:

And a little video to finish:

Latest update Brawl Stars (Download from the App Store) is dated December 15, 2020, and over the last month of play, the meta has settled down enough to make correct drawlists. As a reminder, the new update features a new hero, Tick, which you can get for free once you get 4,000 trophies. There are also several new maps in the game, star powers have been updated, and new skins and star points have been added.

The teer-list we're publishing was compiled by Kairos, a well-known member of the Brawl Stars community, with the support of several top players. Some of you may not agree with the proposed top, but as we remember, the teer-list is a subjective list that will always have controversial positions. So here is a list of the best characters in Brawl Stars as of December 2020. 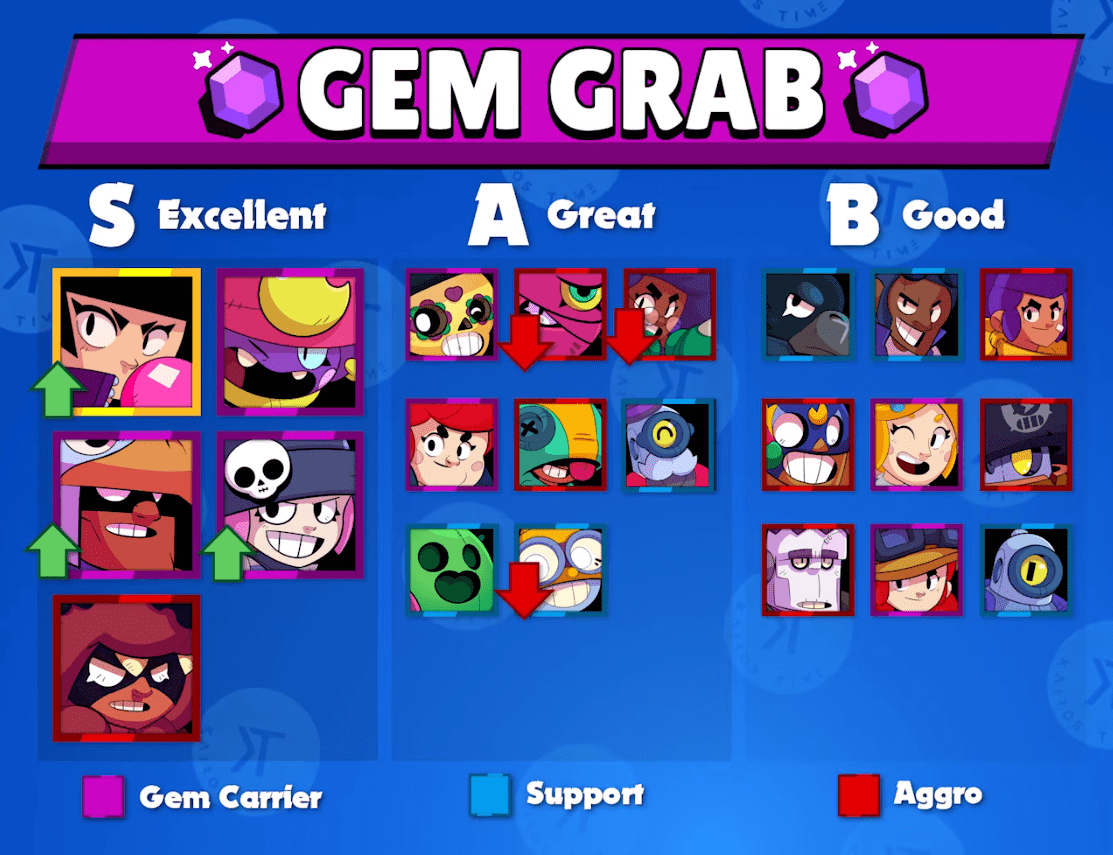 The best characters in Showdown 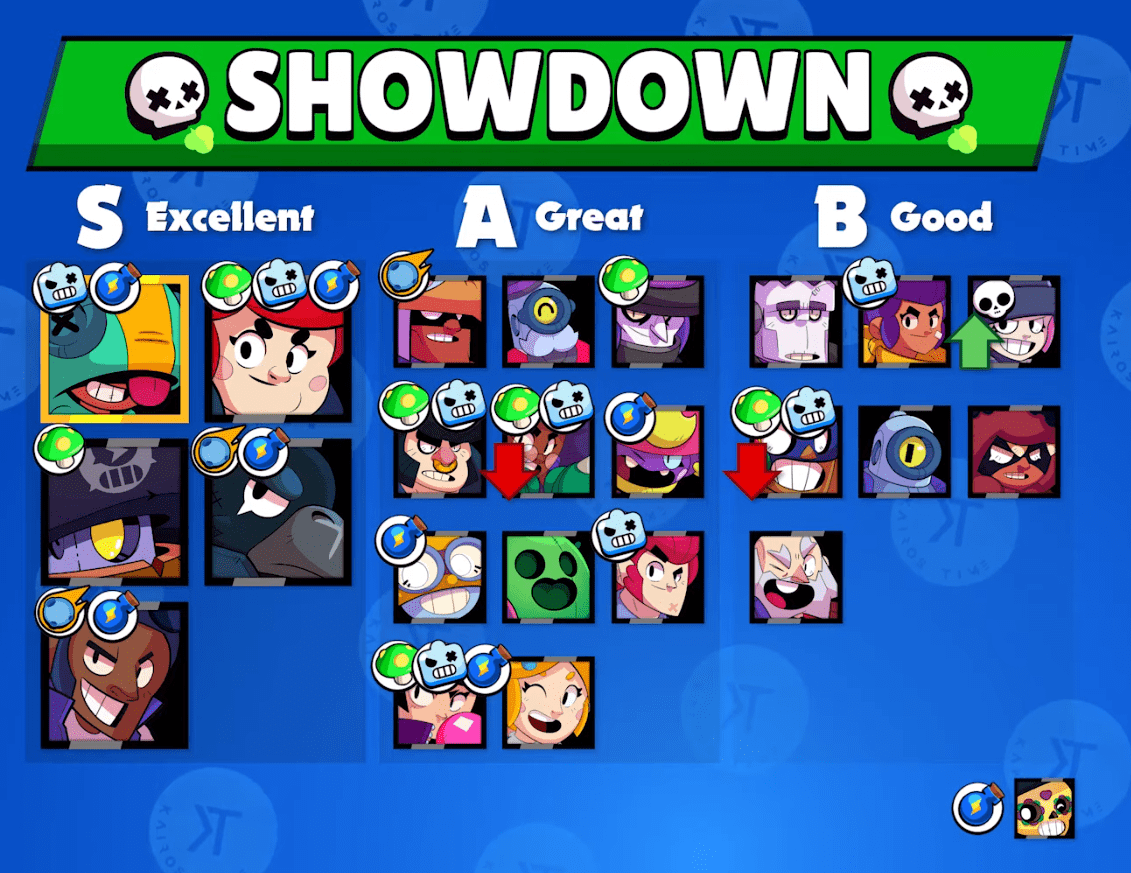 The best characters in the Clash of 2x2 (Showdown Duo) 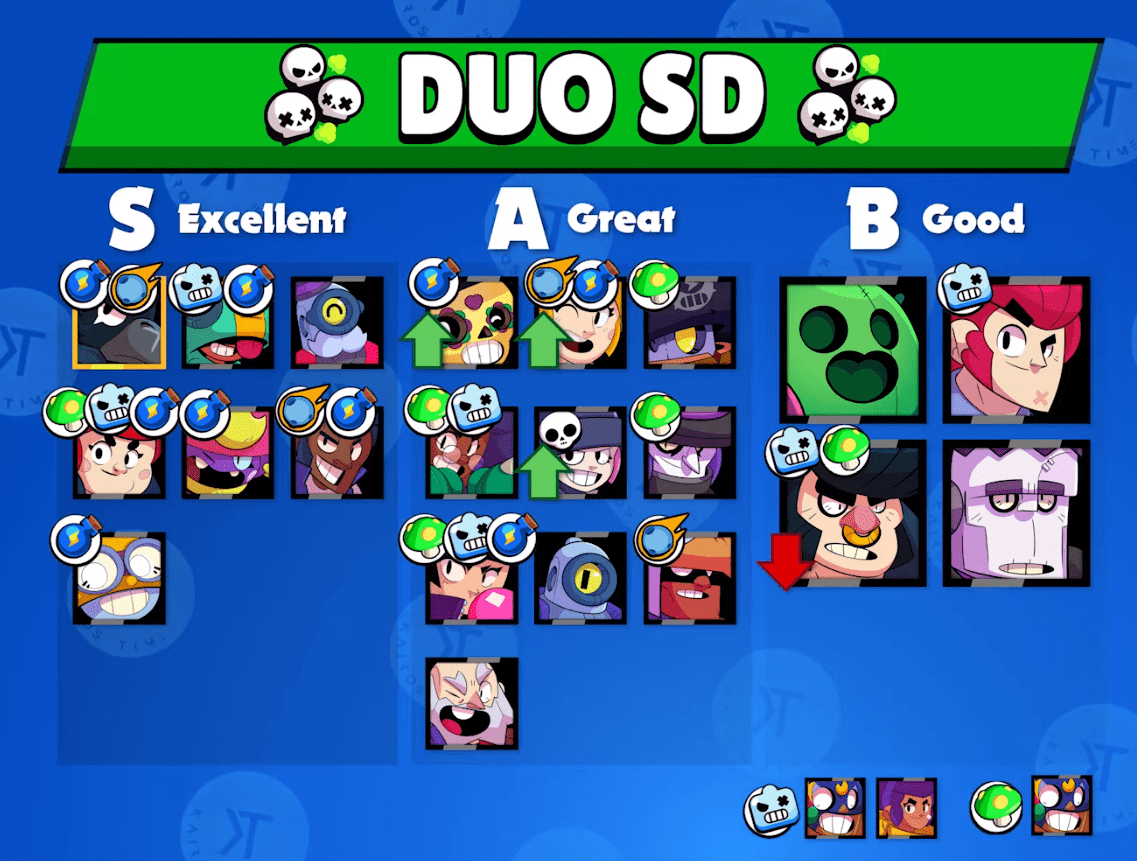 The best characters in Heist 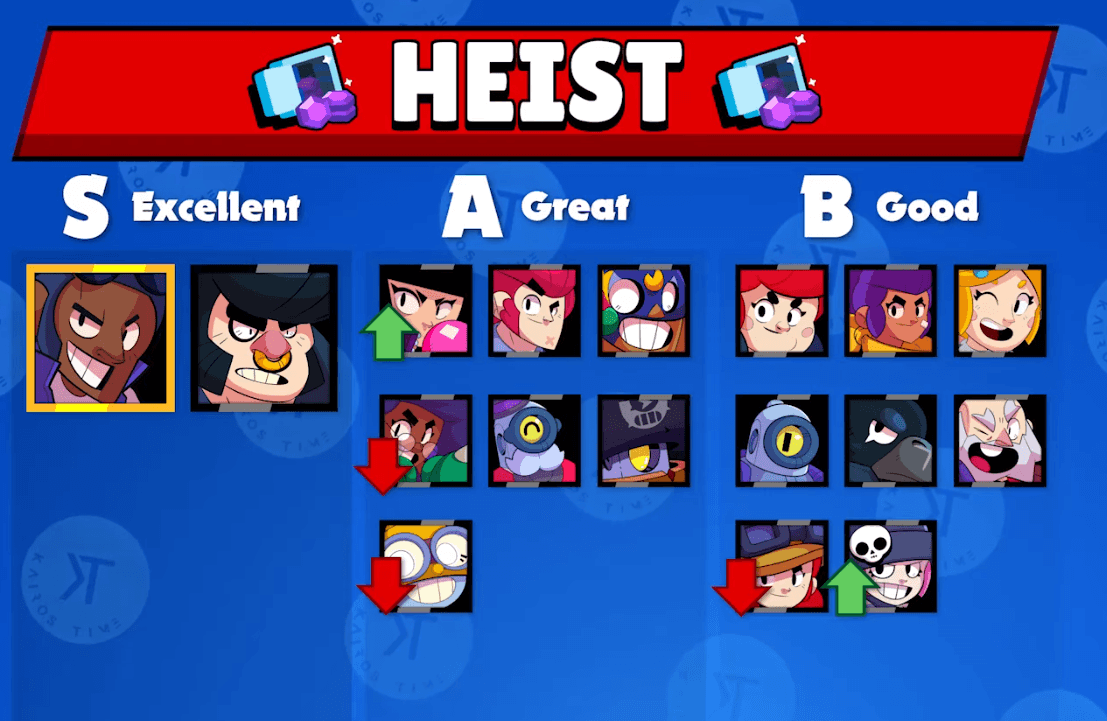 The best characters in Brawl Ball 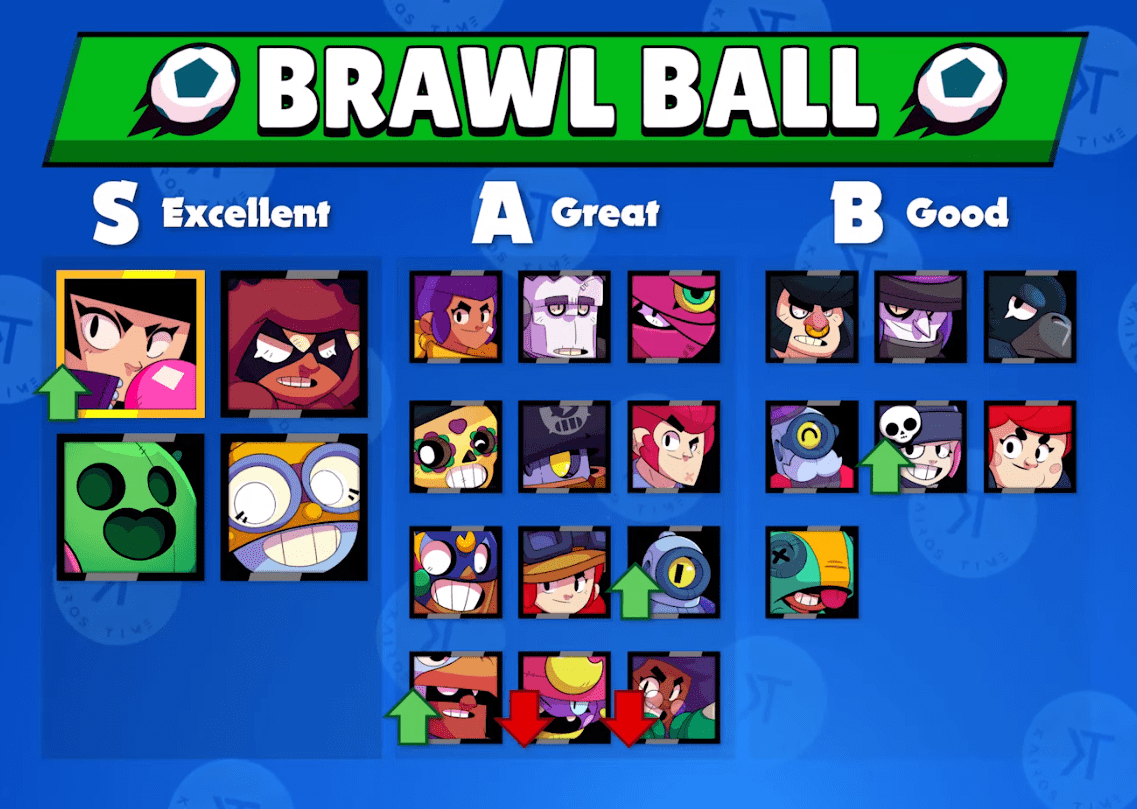 The best characters in the Bounty of Capture Award (Bounty, Bounty) 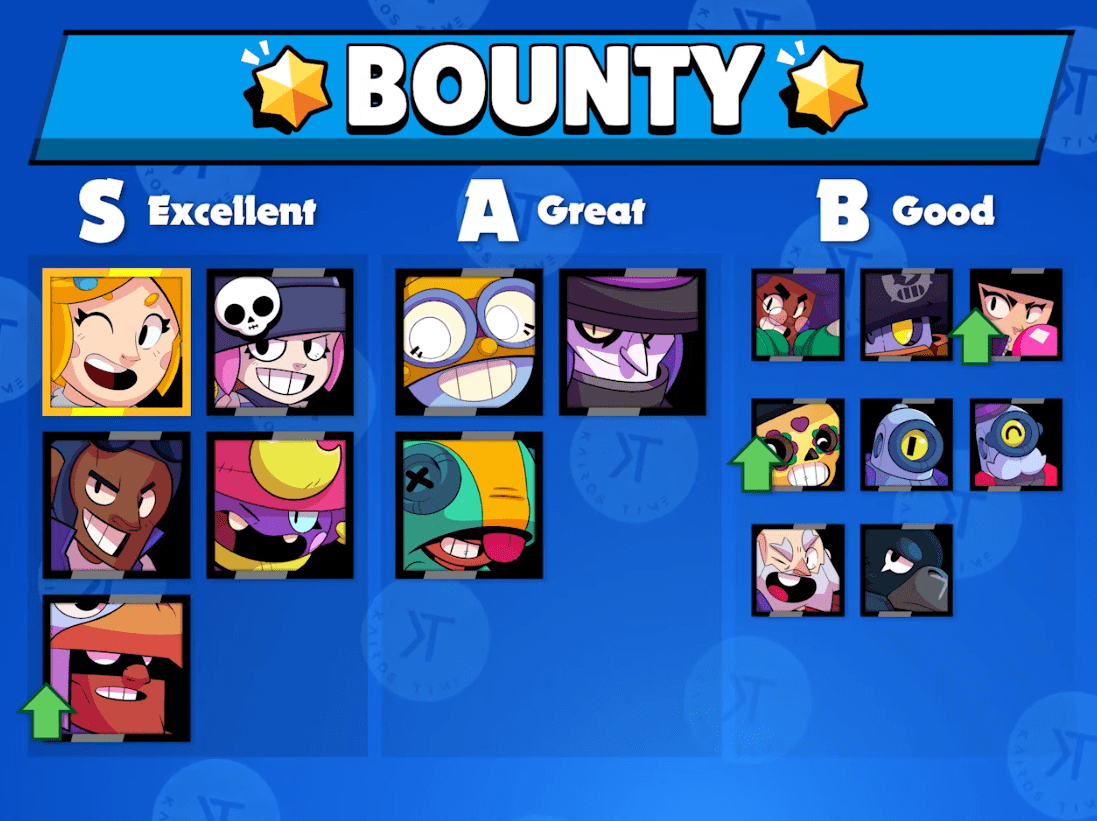 As a bonus, there's a Roboworks tee sheet: 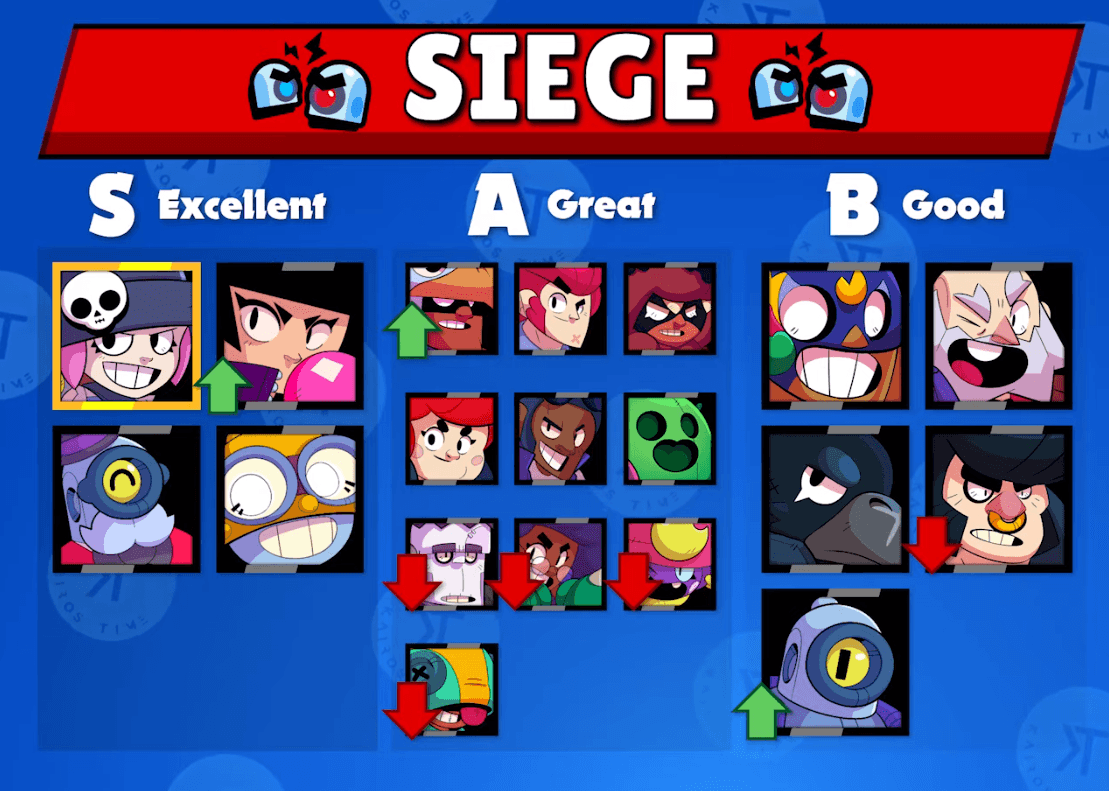 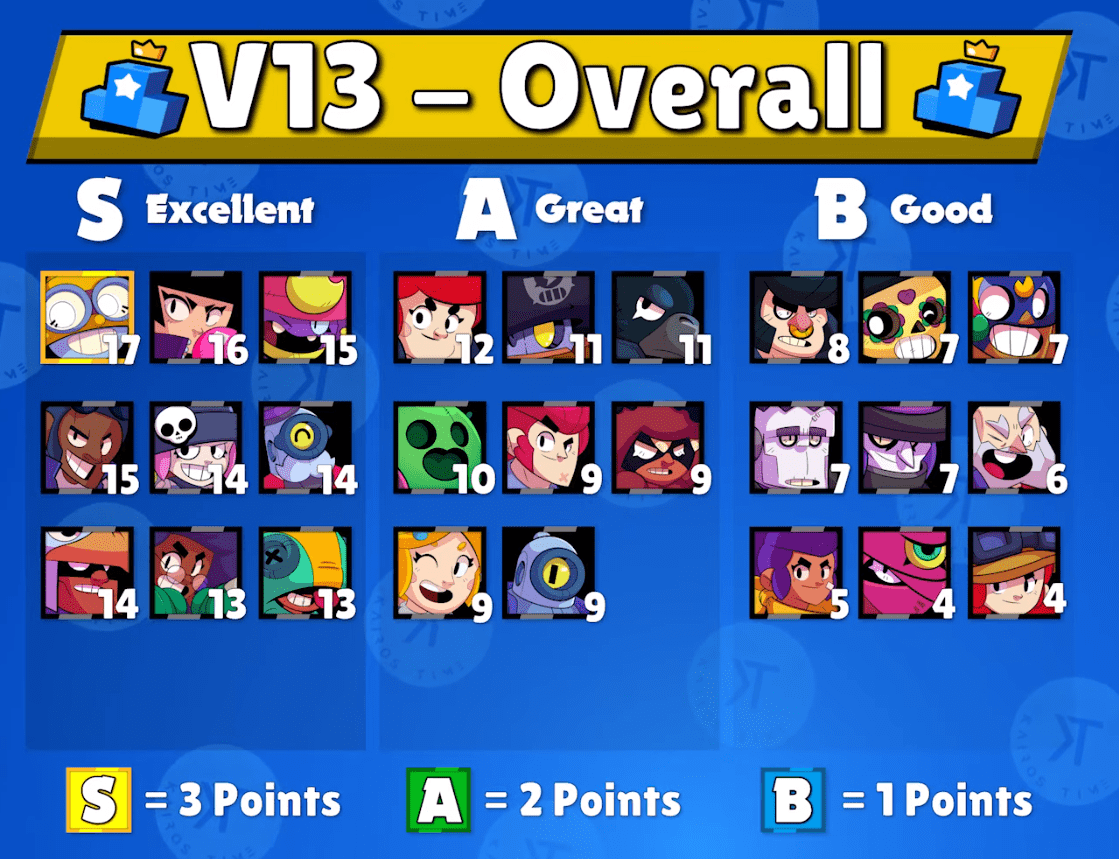