Royal Revolt 2 is an arcade strategy game with 3D graphics. Build your kingdom, improve your defenses, build alliances, and defeat real players from around the world. Millions of downloads and great reviews have made Royal Revolt 2 one of the best games! Developed for Android, iOS and Windows Phone. Royal Revolt 2 tips is a must have, because you will want to stop playing 😉 while you figure it out.

- Excellent three-dimensional graphics - Multiplayer strategy - Battle Arena of your own design The essence of the game: create a deadly maze to protect your castle treasure (gold) - think Tower Defense and swing and dress his hero and his army to seize the treasure (gold and honor) from other players, participate in mini-leagues and receive awards (ruby).There are many reviews and tips written about the game online, I will write about my experiences and tips, by analogy with Nonstop Knight game walkthrough. Well, let's go.

Contents hide
1 Structures.
2 Character
2.1 Other spells:
3 Caves
3.1 The result of tip number three (below).
4 Royal Revolt 2 Tips
4.1 Here's an example of a farm:
5 Video on how to build a base defense in Royal Revolt 2

There is no clear sequence here. The game itself tells you which building you can't build or can't build without the other. From the obvious Throne Room If you do not plan to play in the Alliance (about the advantages of playing in the Alliance below), you can not build Alliance Towerbecause it is built for rubies (crystals) and the higher the level of the alliance you want to create, the higher the level of the tower. If you plan to play as a "mercenary" - welcome to our alliance, it is called - apps4.life, search, join in.

Wisard's Tower There are spells that you will use to crush your enemies, and frankly, there's not much more to say about the buildings. Allocate your development equally between defense and peaceful structures (towers, traps and barriers and peaceful structures). Although I have a slight bias towards defensive structures. It can be very nice and painful to screw up a higher level of foes 🙂 I'm not sure what to do with them.

The Treasury - store gold. Protects a certain amount of gold that will be saved in case of an attack. With each level - this number increases.

Inventor's Workshop - investigate and improve the defensive structures. By upgrading the technology, you can strengthen the line of defense and protect the kingdom and its treasures.

Blacksmith - the ability to spray armor into another type of currency - pearl. Pearls allow you to improve the characteristics of armor, spells and defensive structures. Castle Gate - the last bastion in the defense of your castle, as well as one of the requirements for the construction of other buildings or structures. Each new level generates 2 additional sections of road on which the enemy will walk, one trap and a tower. Use it wisely.

Bunker - a place to store food.

Food is generated The farm. Try to empty the Farms completely at night, so that at night they will accumulate to their full potential.

Taverns - produce gold. Very little. So save it for expensive purchases - closer to a million. 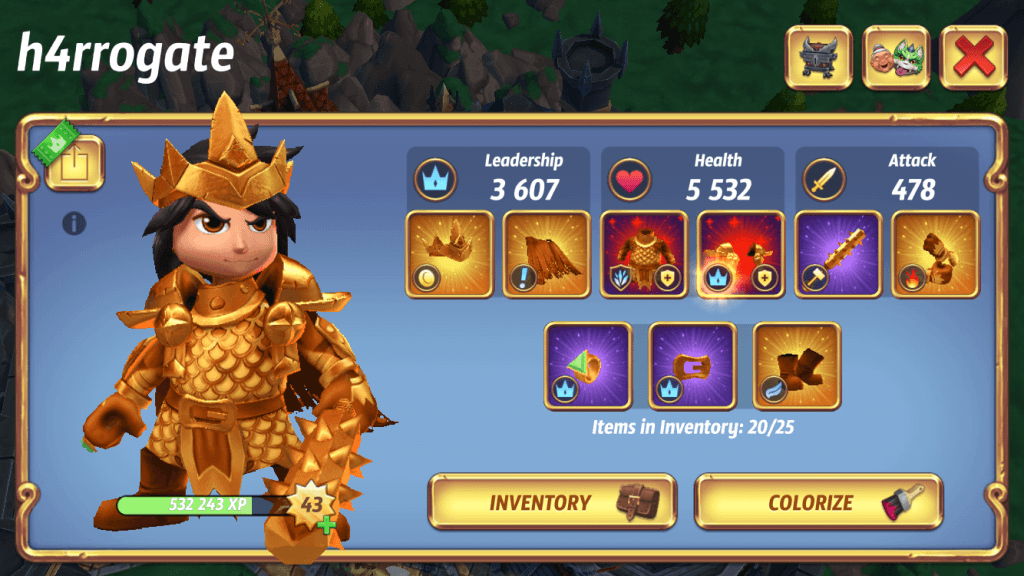 Has clothes :). You can dress, change, and color in the Throne Room, which makes sense. Choose what spells to hit enemies - in the Tower of Mages or just before the fight. I use these:

In addition to spells you can use Scrolls - this is the same, only times stronger and for the precious currency - rubies. Use it, but only when the critical situation and the battle to win very, very much, for example a good reward or points of honor do not want to lose.

There are a few things to know about the Caves:

The result of tip number three (below). 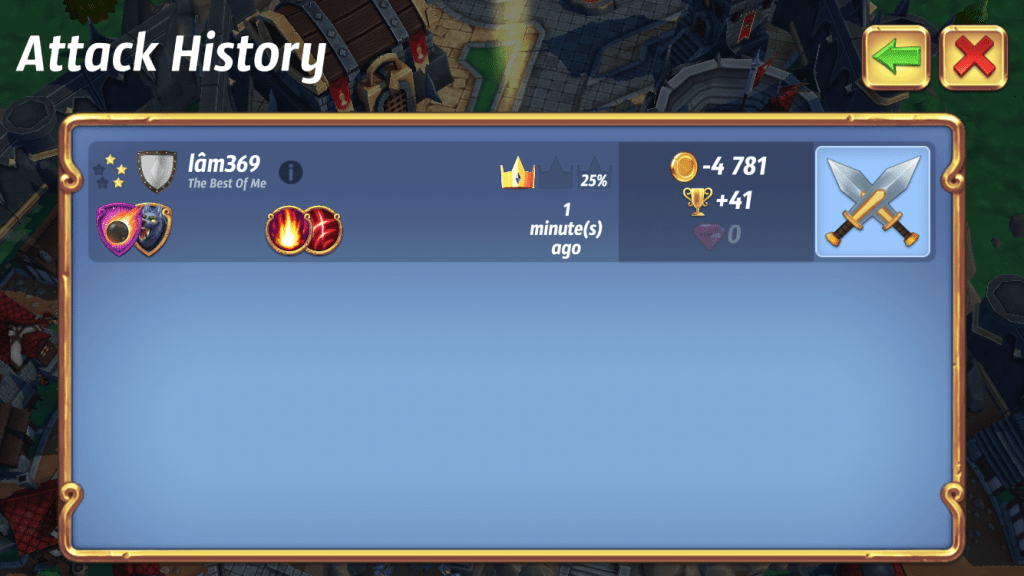 Here's an example of a farm: 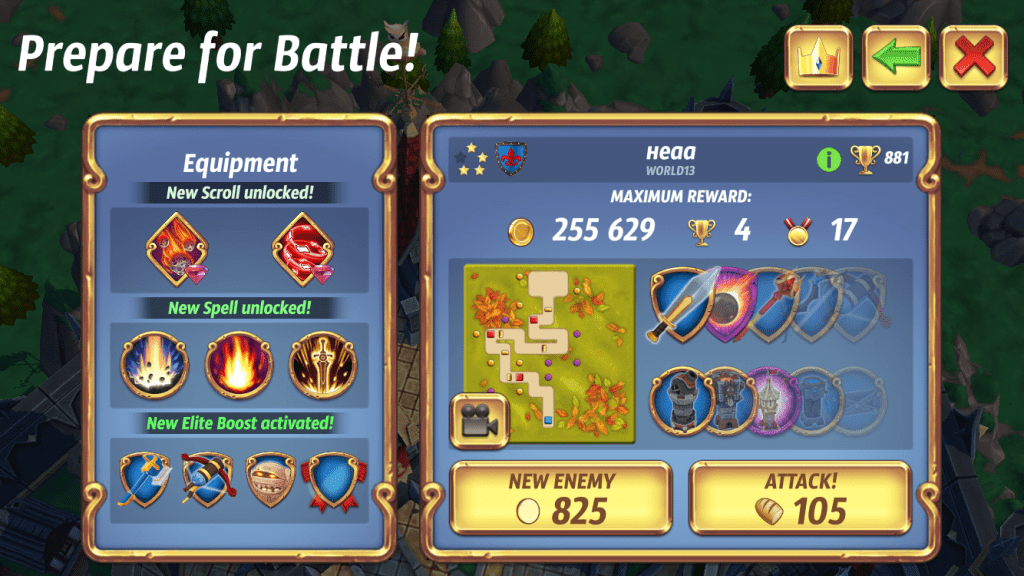 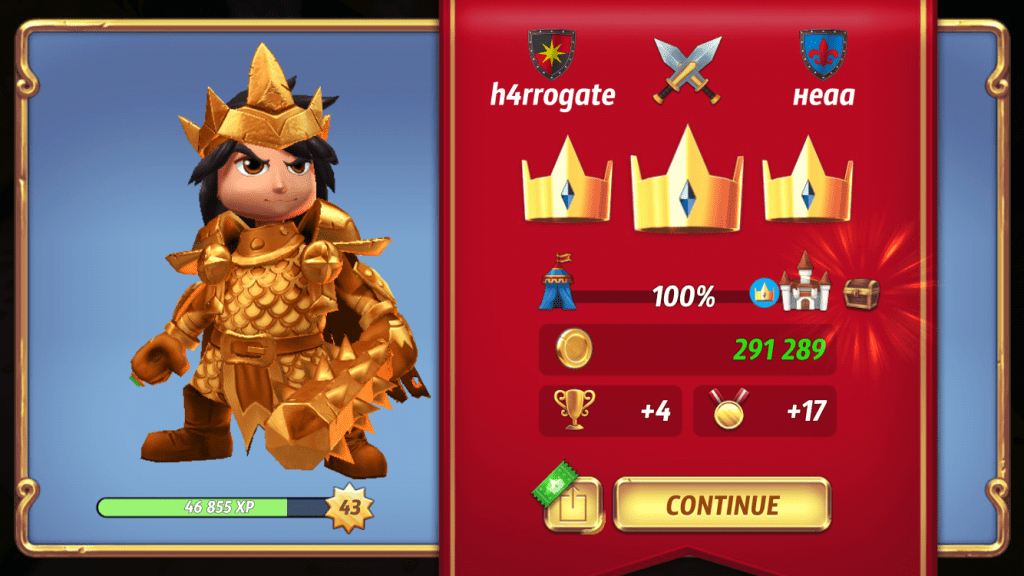 The video describes the base defense strategy in great detail. It's really very cool, with all the tips. However, it is in English. If you have difficulties - write in the comments - I will translate it for you, although as for me everything is clear as it is. 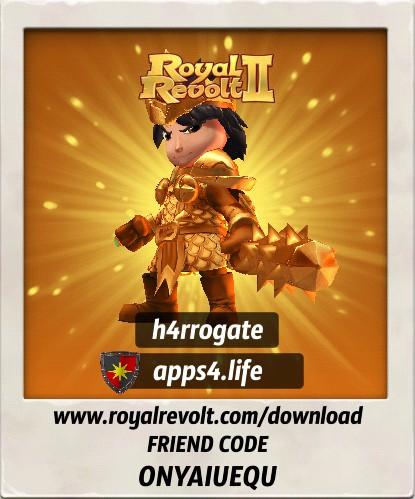