A game called Tennis Clash - an excellent tennis simulator, distributed for free, has in-game purchases. The last two characteristics should be alarming, because often the developers overdo the free-to-play model, and instead of a normal game we get a project for pumping out money. Let's see what type of mobile game Tennis Clash is.

The developers have simplified the gameplay as much as possible, reducing it to a clear "hit and run". Otherwise, the game does not differ from the real tennis - two players throw the ball to each other on the field with special markings, divided by a grid, using rackets. You can upgrade your characters with items and improve their starting characteristics. And instead of the usual energy we'll use strings here - once they run out, you can't play, and their supply is not replenished with time, but falls out of the bags. There are ordinary nylon strings that don't improve your performance, and then there are cool strings - they give you the ability to hit harder, twist better, pitch more powerfully. The latter, however, either very rarely fall out of the bags, or are purchased for crystals, and are very expensive.

How to Run in Tennis Clash

You can also use taps on the field, but keep in mind that the tennis player can't do it instantly, it will take him some time to get ready (after a fall or some twister). It is possible to "plan" the athlete's run - you swipe to hit and tap on the ground in the right direction, as a result he will hit and then run. You must always stand in the center of the back court to be able to get any shots, otherwise your opponent will catch you on the opposite side or scatter in the corners.

How to beat in Tennis Clash

Swipes upwards, and the faster and longer the swipe, the farther and stronger the blow will be. So you have to be tactical about hitting - don't hit into the corridor or behind the back line (that's out), try to spread yourself out into the corners. There are no shortcuts here - you can make a short swipe and try to hit under the net. Crosses are good - this is when you hit on the diagonal and try to hit the halfcourt (squares near the net). 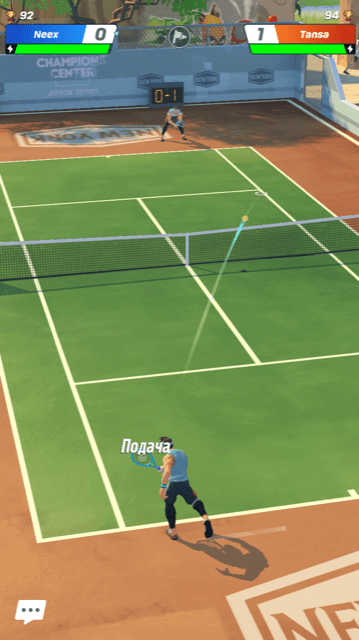 Our character has certain indicators, which together show the effectiveness of the tennis player. Here they are:

How to improve performance?

For this character can be given 7 items: 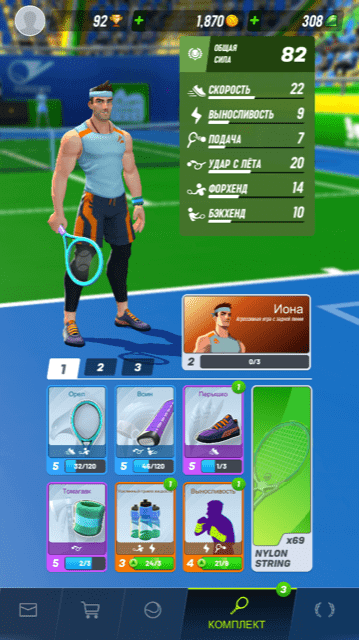 All of these items are pumpable - you find them in bags (lootboxes) and increase the level. Without pumping them in the hope of finding a better version of the racket / winding, you just lose all the games and will not be able to impose the fight on your opponents. The characters themselves can be changed - they have certain "features", they have different starting characteristics and skills. True, they fall out very rarely and on reaching a certain round, so don't get your hopes up, especially since the starting character is pretty good. And yes, I intentionally don't write which stats are improved with items, because they affect player stats differently - different racquets can affect serve power, flying strokes or standard forehand/backhand strokes. Look at the characteristics of the items and draw conclusions as to which option is best for you right now, which suits you best.

So far there are 6 heroes available, each with a different style of play. Also note that two of them are left-handed, so their forehand/backhand is called left and right kick respectively. This can affect your understanding of the game (hard to readjust) as well as your opponent's adaptation to you.

Jonah - The starting character (with a not-so-sounding name, in the English version his name is Jonas). He has powerful attacks from the back line, so when choosing him, you have to be ready to hit hard and accurately. Sometimes it's hard to hit the court, especially for beginners, but I'll be honest, he has a really good backhand shot.

Hope - A versatile girl who is average at any position (back line and net), and is equally good at hitting left/right/flying. Good character, available from round 1.

Florence - Another female tennis player who is not very good at hitting, but has good basic movement speed and stamina. She's great at counterattacking because she can get difficult balls because of her speed. I've already had Florence fall out, I can't get used to her because you have to run a lot and you can't hit a skill shot. Plus she is more dependent on the equipment. Although, some Tennis Clash players prefer this, exhausting style, and it is relevant if you have a wristband for hitting skills. Without it, it's better to pick Iona/Hope and try to play normally. Available from round 2.

Leo - The first left-handed player on the list. He has poor stamina (0), but he makes up for it with a good powerful serve and a strong shot from the summer. If you like Federer's game, when he serves powerfully and runs to the net (it's called serve and volley), you can take a closer look at Leo. It's understandable that a notional Florence can just run you over, and you won't be able to cope with backhand and backhand serve, but it's still worth a try if you start with your serves, you'll always have a high chance of winning. Available from round 3.

Kaito - is the youngest tennis player, so he has the highest basic speed and stamina, he pulls out all kinds of balls with ease, and he's definitely better than Florence. He has the same basic serve as Leo, good forehand/backhand (better than Hope), and he looks like the best tennis player, even though he's been available since the 4th round. I recommend looking at him, he's really cool.

Victoria - Second left-handed player with powerful forehand and backhand, decent speed, but low stamina. She is available in the 5th round and higher, and should be considered the best tennis player (logically), but Kaito looks more interesting.

Personally, I like the game very much - I play a lot of tennis, and it's another opportunity for me to practice, especially in tactics. There are different people playing against me with different styles of play, you have to adjust to each of them, taking into account the capabilities of your character. Of course, it's a pity that slashing, twisting and shortcuts are not well implemented here, because then the tactics would diversify even more, but now I have to play trivial crosses, line kicks (which are very hard to do in real life) and corner kicks.

How to win in Tennis Clash

There won't be many tips, and they work as long as your overall stats with your opponent are plus or minus the same. If he is significantly stronger than you, and also with steep strings, there is not much chance in this match.

Before every match, you have a couple of seconds to compare your character to your opponent. You can tell his weaknesses right away - if he has a weak backhand, hit him under the left hand. Maybe his opponent will be ready for this and will go deep to the left side of the court under his forehand, but then you can move the ball strongly to the right, and then he won't have time to catch it. If he has strong underhand characteristics, try to play crosses, or flip him under the backhand line. Watch how he moves - sometimes it's good to hit the opposite way, especially if you've shown your opponent before that you know how to corner. 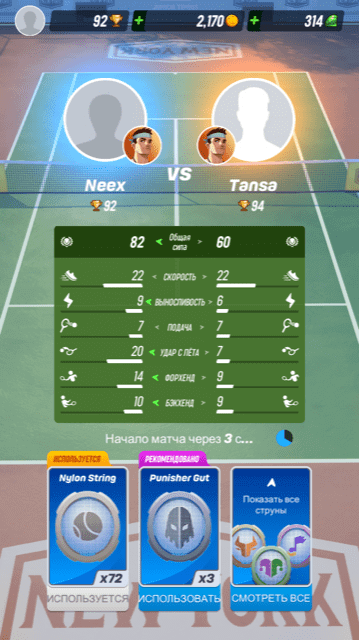 Very often in tennis you want to hit hard so your opponent can't take your shot, but more often than not you'll knock the ball out of the court. That's why it's better to have the ball fly down the line or exactly into the corner under the backhand than to hit it hard and have the ball go out of bounds.

Your character has a predisposition to a certain type of play, plus the presence of items obliges you to follow some tactics. You can play one style, but a conditional wristband and shoes can give you the opportunity to rearrange into the mirror opposite style - change your character and learn to play again, perhaps even in practice. But always adapt to what comes out of your bags.