We couldn't get past one of the best multiplayer strategies called Mushroom Wars 2, which is one of the brightest representatives of mobile strategies. Players will have to lead an unusual army of unique mushroom characters and take part in hundreds of epic battles. This is roughly the beginning of the plot, and it is already different from the usual orcs, archangels and other unusual creatures. Briefly let's go over the game Mushroom Wars 2, and then tell you tips that will help you win, if not always, then very often). 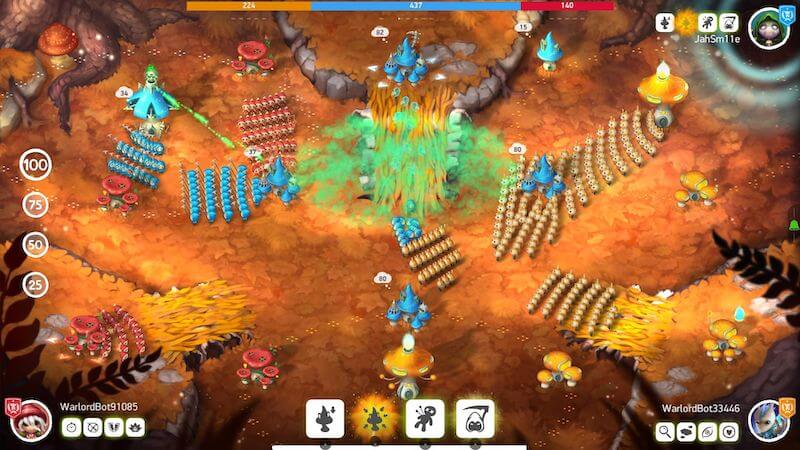 First Offers to fight the bots (difficulty everyone chooses for themselves) - it includes 4 main episodes with a huge set of locations and various enemies. Second will send everyone to special fields for battles, where as opponents will be real players.

By the way, to feel the mechanics and get acquainted (if you have not played the first part of the strategy) with the game will be best in a single-player campaign mode.

How to play Mushroom Wars 2

The goal of the game is to capture all enemy buildings. To do this, use tap (?) to select the building you want and drag units. On each of the lokasYou will see several types of buildings inside which your units are located. They can either just be inside or move between buildings.

If you move your wards to a neutral building, they will gradually fill it up. If you move your units to an enemy building, your troops will immediately attack it, and if your creatures outnumber the enemy's, the building will come under your control. Winning battles earns you skill points, gold, and chests where you can find new characters, soul crystals, and useful upgrades.

All buildings of this type can be upgraded 5 times. The level (from 1 to 5), defense, maximum number of generated units, generation speed and cost of the next improvement are all increased. It should be understood that the current village level affects not only the total number of units, but also how the heroes will defend this building, at what speed they will move and how much damage they inflict. Additionally, it should be noted that pumping the village allows you to increase your overall "morale". 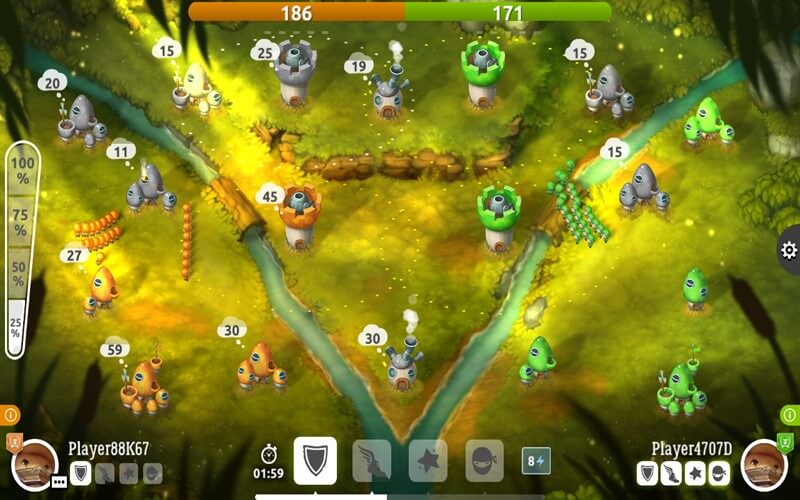 Morale is the most important indicator in strategy. The higher it is, the faster units will move around the map, deal more damage, and buildings will take less damage. The amount of morale is displayed at the top of the screen, just under the star bar. Remember, the more morale you have, the better your chances of winning. Don't Put your units to certain death, don't lose buildings, and then morale will always be high.

Defensive structures that are upgraded no more than 4 times. Upgrading towers allows you to increase the radius of flight of shells, the frequency of shots, the amount of "health" of the tower itself. The higher its level, the easier it will be to defend. As with villages, the "morale" will increase as towers are upgraded.

Forges do not have any upgrades. At the same time, their number depends on the current attack and defense. There is no point in building more than 4 forges at a time, as this figure is ideal and most effective (determined by experience).

These buildings have several variations . "Domination has no upgrades and cannot be converted to another type of building. Players should aim to capture all such buildings - if you manage to capture all enemy points, you win. Buildings of the King of the Mountain type also have no levels or upgrades. Their number determines in part how much you win. Prand the start of a new game will display 300 points at the top. The more "King of the Mountain" buildings you have at your disposal, the faster these points will begin to disappear. The player who reaches zero first wins.

You can go through the single-player campaign as many times as you want. You won't lose anything, but gain a huge amount of experience and knowledge that can come in handy in battles with real players. We suggest you to start with it before you go to multiplayer, because there every mistake can cost precious points, coins and chests.

Tips on how to win in Mushroom Wars 2

Take a close look at the location and determine which part has the most neutral villages - that is where you will need to move first to ensure a numerical advantage over the enemy. The more neutral villages you can capture, the better your chances of destroying your opponent.

We recommend choosing 25% sending troops from all buildings (set the switch to the right value on the left side of the screen) to have the most active troops in case the enemy does decide to attack you first. The number is also set by experience-otherwise there is a good chance of giving up your buildings. Although there are other tactics, observe other players.

Improve villages in timeThe first time you have the opportunity to use a new game, you can use it to create more soldiers (resources), which are the key to winning victories.

No need to send all troops to capture one enemy building. You can meet the towers, and the enemy, seeing that his building is attacked, immediately send help from the nearest village and then the numerical advantage will be on his side.

Try to gradually move from defense to attackThe main thing to do is to take over nearby settlements, converting them into buildings that can increase the attack and defense speed of your fighters. Also, don't forget to use your heroes' abilities, which are described below. They will help you deal extra damage, get protection during battles and freeze your opponent's units.

Try to move around the map "in a snake". So the density of units in one wave is much higher, increasing the speed of their movement and, accordingly, the damage inflicted.

The game requires the ability to count quickly. This will allow you to understand how many units the enemy has sent from his building, and whether to attack him.

Use percentage mode. It is activated in the upper left corner and allows you to send a percentage of units to capture/defend buildings, saving not only resources but also time.

If you lose a building, try to get your units out as quickly as possible. This will save some troops and not give an extra morale point to your opponent.

Don't forget about multiselection. It is activated by simultaneously pressing three fingers on an empty space, after which the player can select the desired number of buildings and send units into battle or defense.

Watch replays of the best players (they are, by the way, in the game itself), borrow their tactics and style of play to become stronger and smarter.

UnfortunatelyIt's impossible to choose one tactic for all upcoming battles. You have to compete with real players, each one acts in his own way and can surprise you with unexpected actions.

To diversify the gameplay and improve your own skills, the developers have added a huge selection of unique characters to the strategy. Let's take a brief look at each of the characters.

A brave, intelligent and very strong warrior who is armed with a razor-sharp sword, armored armor and a reliable shield. ЭThe first character you get for free and it is on him you will have to train in the use of skills, various skills and abilities. He is strong only in the early stages of the game, but if the battle drags on, it will be of little use. Play aggressively, and at the same time, do not forget about the protection of your own buildings. 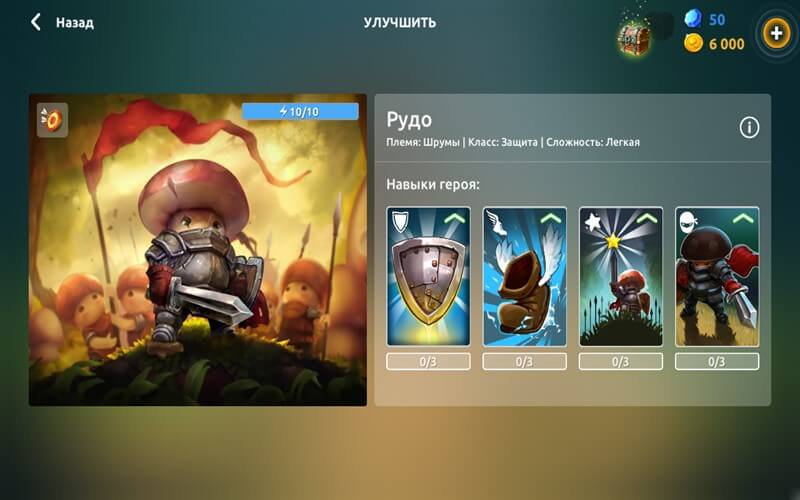 Commander in Chief of Mushroom Troops. He can be used at all stages of the game, regardless of the current situation on the battlefield. At first he can cause problems for the enemy army in development, in the middle of the battle he gets a significant increase in damage, and by the end of the game he destroys all the units that get in his way, regardless of their performance. The character is difficult to master, but very interesting - if you use him correctly you'll win most of the battles.

Powerful enchanter. Ideal in 2x2 locations where your allies are placed diagonally. The character is a defender, but his main skills are able to deal a lot of damage and change the direction of a group of enemies. The level of mastering of the character is medium.

The queen is capable of causing a lot of problems to the defending side. The character is one of the strongest and most challenging at the same time. With the right combination of skills you can crush enemies and instantly turn the tide of battle.

A sorcerer with the power to control nature. All the elements are under his control: use bees to repel attacks, freeze buildings, and tear down enemies with tornadoes.

Lord of the Afterlife. His abilities are very annoying in the early stages of battle. For example, you will be able to lower the level of buildings, resurrect units destroyed in buildings, and strike fear into enemy wards.

Characters are unlocked for soul crystals. These, in turn, are either dropped off in chests, which are given as rewards, or purchased in the in-game store.

In general, we note that Mushroom Wars 2 has become more interesting, dynamic and qualitative than the first version. At the same time the game is distinguished by a good picture, intuitive interface and understandable control. All these features allow us to call this strategy one of the best in the genre, so we recommend you to try it if you have never played it before, especially if the game is sold for free.