Mobile Legends has just recently started a new season, which means that once again we have to climb from the depths of elo hello to our usual divisions. And since the first few weeks are always roulette, because you don't know who you'll get in the team, you have to choose such characters, on the play of which the outcome of the match may depend. It just so happens that tanks in the sense of "soaking up damage" rather than "a fighter with a good attack and good health" are the most thankless and the most rarely taken class in the lobby. That means you're more likely to pick up that slot and show off the class. Today I'm going to tell you about Grocke - probably the best tank of the last few seasons, which still absorbs damage, but also gives it away just the same. However, there are a few nuances here, which we will talk about.

Contents hide
1 Why Grok is the best tank in Mobile Legends
1.1 High survivability
1.2 Good damage
1.3 The ability to turn the game around
2 Grok's abilities
2.1 Ancestral Gift (passive)
2.2 The Power of Nature
2.3 Guardian Barrier
2.4 Wild Run
3 What to collect Grok.
4 How to play the Groc
4.1 Early game
4.2 Midgame and Leitgame

Why Grok is the best tank in Mobile Legends

I see several distinct advantages of Grok in the game, among them:

Grok is primarily a tank, which means that you don't have to worry too much about your health in teamfights, because you'll have more than enough of it. But that doesn't mean that you can rush in with 1x5 and beat the first hero that shows up, because you'll get picked apart by your opponent's kerries very fast. That said, Grok is, for the most part, a serious initiation, and some fights depend on how he bursts in. You also need to remember that this character creates a front lane for his team, and without us, our kerries won't get anywhere.

Despite the character's tannery, Grok is a great hand-to-hand, and he has his first spell, which deals tons of damage in the early game. That's why it's always nice (and comfortable) to stand with him.

The ability to turn the game around

I'll try to explain. As you understand, in the beginning we will fight 2x2 or 3x3, so if Grok can shut one down with his ulta (and ideally put a good wall on the other one), the fight can be over quickly. The ability to split up the opposing team or obstruct with a wall in the pass distinguishes a good Grok from a great Grok, but at lower levels of the game even proper positioning will be enough to use his first ability. Separating the enemy team in the leyte is always an overkill, since a late-game advantage of at least one player can almost always translate into an elimination.

When Grok is near a wall or tower, movement speed increases by 10%.Physical defense, magic resistance and health regeneration also increase by 26-180 (this effect increases depending on level). 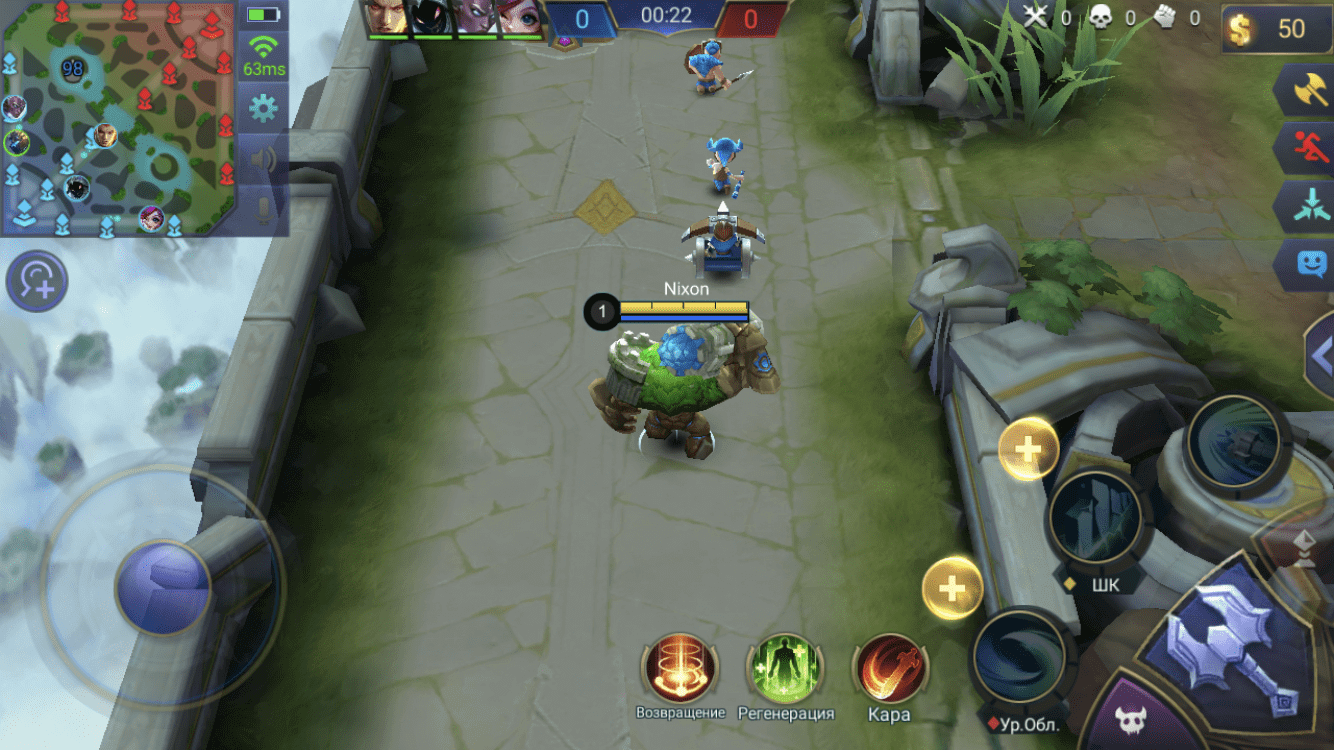 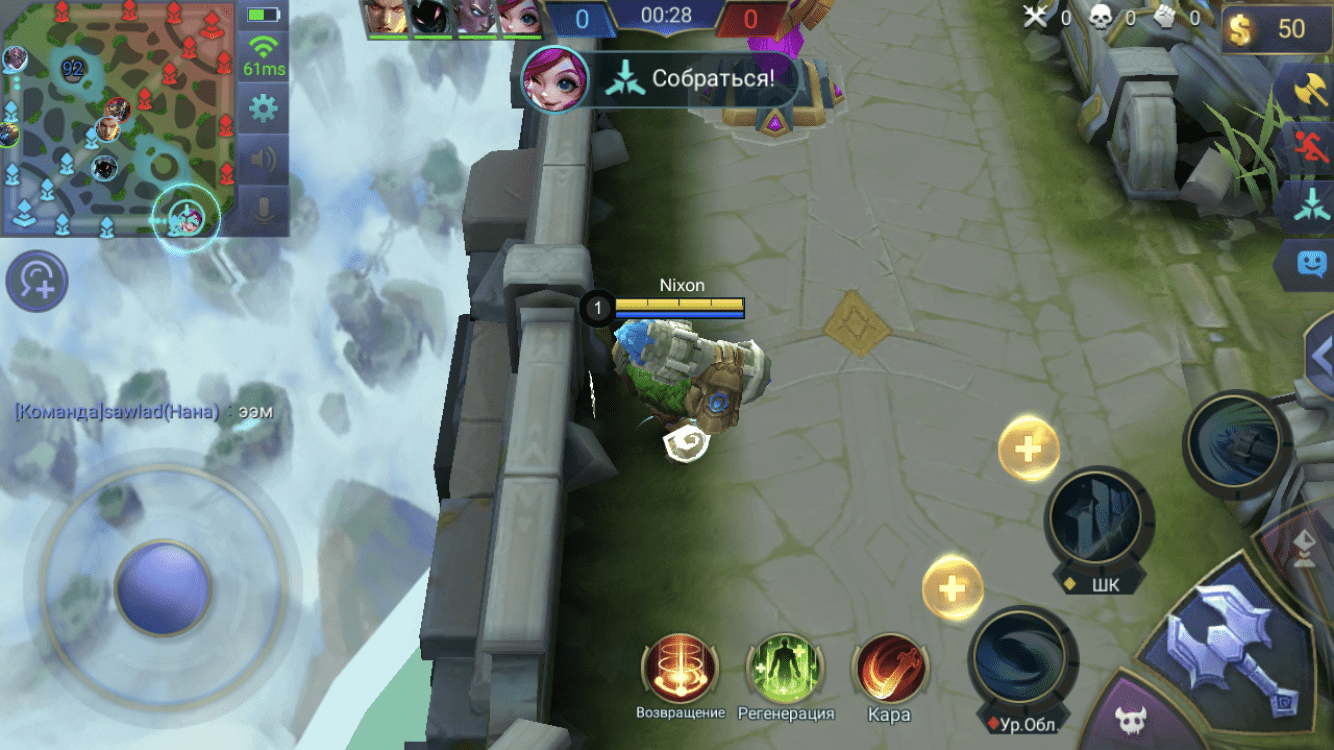 And near the wall, it works.

The Power of Nature

Raises a weapon to sweep enemies around, dealing 300 physical damage (+ 40% physical attack) and slowing them down for 2 seconds Damage will increase as energy is gathered. If this skill is used near a wall, Grok will be immune to the effects of crowd control.

If we don't say the trite "that makes Grok the Grok", this spell will be used in 90% of the entire gameplay. The truth to remember here is this:

Spell is charged, that is, you have to hold down the button for a long time to accumulate the strength of the charge, otherwise there is no point in castigating it
At first levels, the Force of Nature deals the wildest damage, which allows you to zoned enemies, fight off 3x2 gangs, and stand aggressively on the line
When you run next to a wall, Grok is immune to the effects of control (slowdowns, slams, etc.), so don't be lazy to use the spell in lockdowns

Fires a shockwave at target location, dealing 300 (+ 50% physical attack) physical damage. This shockwave then raises a stone wall that blocks the road for 5 seconds.

Learn how to throw walls, and then Grok will be as useful to your team as possible. Although, like I said, you don't really need walls in solo games (just because there's no communication), and you'll often be more of a hindrance than a help, because someone on your team is bound to break in badly even under perfect walls. But that doesn't mean that you can throw walls around as you please, a quality wall can help you catch / catch up / call off the enemy. 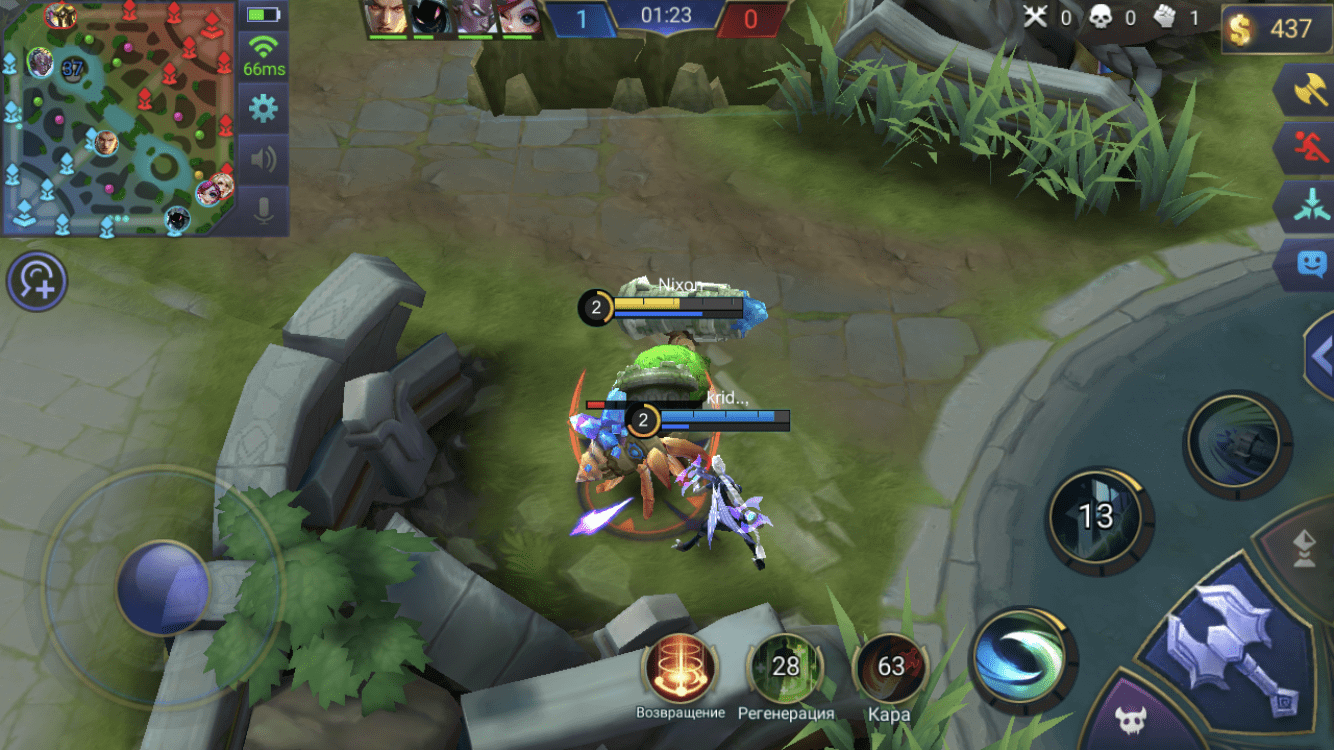 The wall is not clearly visible - it is at the very top (under the timer), creates an additional obstacle to the top-lane

In practice it's hard to hit units with the ult, especially mobile units, so it's usually used as a charge. Although it's clear from the skillset that Grok has a great combination: wall behind the back > ult > first at maximum charge. And in principle it's possible to kill some squish or wounded enemy with that combination, but unfortunately it's not Grok's main objective, so you won't get many thanks for that muv. So keep in mind that when playing as a Grok, you should not chase kills, but be as useful to the team as possible.

What to collect Grok.

The build is as simple as possible - you need to be tanked and deal at least some damage. At the same time, the top players have already determined that the Grok is an excellent fit:

Speed Boots - The best footwear possible, because the Groc is fundamentally about movement speed. You also slow down your opponent with your auto-attacks, which is good for your tank-sapper role.

Shield of Athena - Gives a good shield, which can give you a few extra seconds of life in the battle.

Immortality - It's better to build with 5 or 6 attacks, though tops take it as a third attacker. They know better, of course, but I think this build at low levels is doubtful, because it's better to have survivability. In any case, try to build this "shield" in the middle and in the late game to see how effective it is.

Wings of the Queen - Give 1000 extra hitpoints and passive vampirism on condition. Grok becomes even thicker, permanently immune to magic, such a "wall" is hard to penetrate even by a swinging kerry.

Mask of Courage - Again, a controversial item as to when to take it, early or late in the game. It's a special item because you don't get any gold or experience from your allies, and you don't share it with them. But the mask gives buffs to your allies' movement speed, physical and magic resistances, increases HP and manaregen. Cool thing, I recommend to collect it with 2 or 3 attacks, although the tops take it with 5-6.

Protective helmet - More for solo play, because it gives a lot of HP and regeneration for killing / assisting. 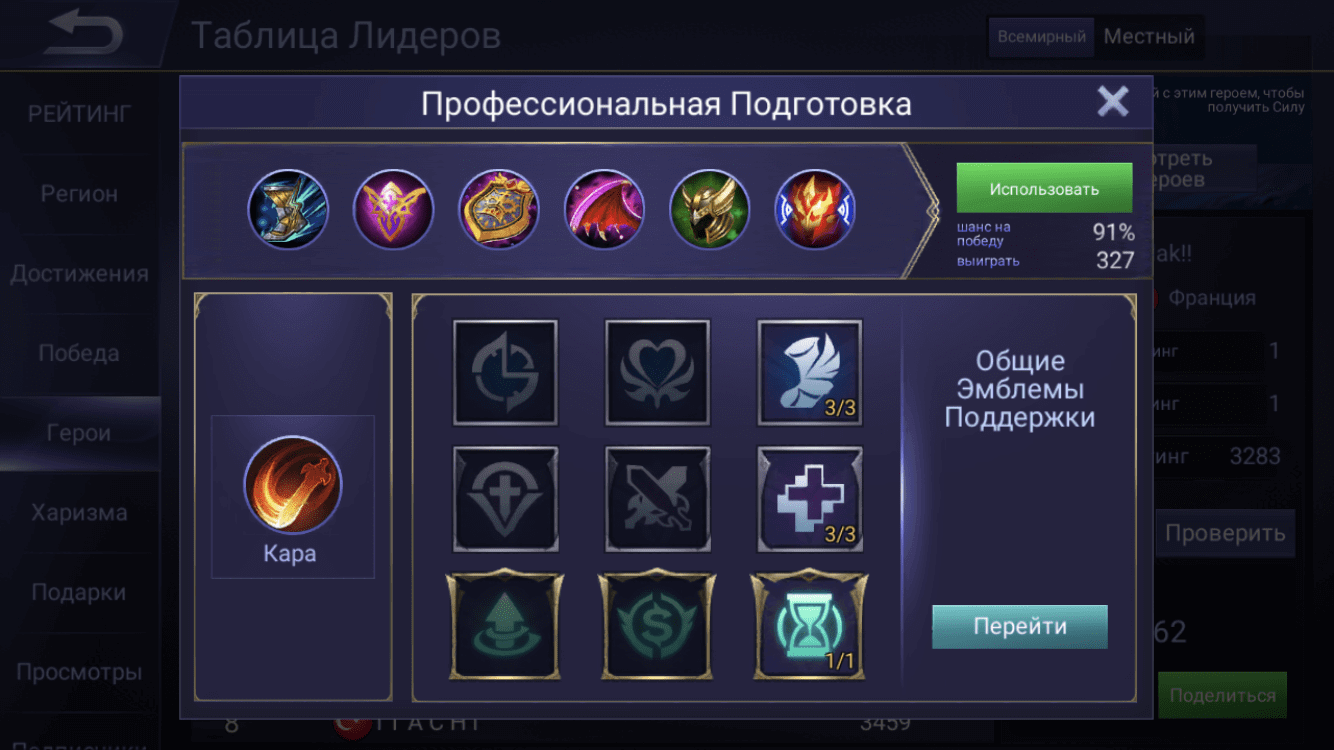 The world's top 1 build on Grok

How to play the Groc

You have to choose either top or bot - in the midrange Grok does not feel very confident, because in the midrange are strong and mobile mages, with whom to fight at the beginning of the game is very difficult. It's best to stand up against the enemy kerry - you can zoned him, and with good positioning you can kill him. Your job is to saport your kerries and tank, so in small locks 2x2 and 3x3 try to stand close to them and not to burst in solo. Try to stay close to the bushes (or in the bushes themselves) to activate the passive, and periodically hit the enemies with your first skill. Try to swarm the line to clean up the nearest points, look at the map to shift to the turtle if necessary. By the way, if you're farming neutrals, try to tank in such a way as to be able to look through the nearest approaches and bushes, as soon as the enemy top/bot leaves the line, get ready to throw a wall to retreat. Remember that you are stronger than many characters, and few people realize it, so enemies will rarely take you seriously. 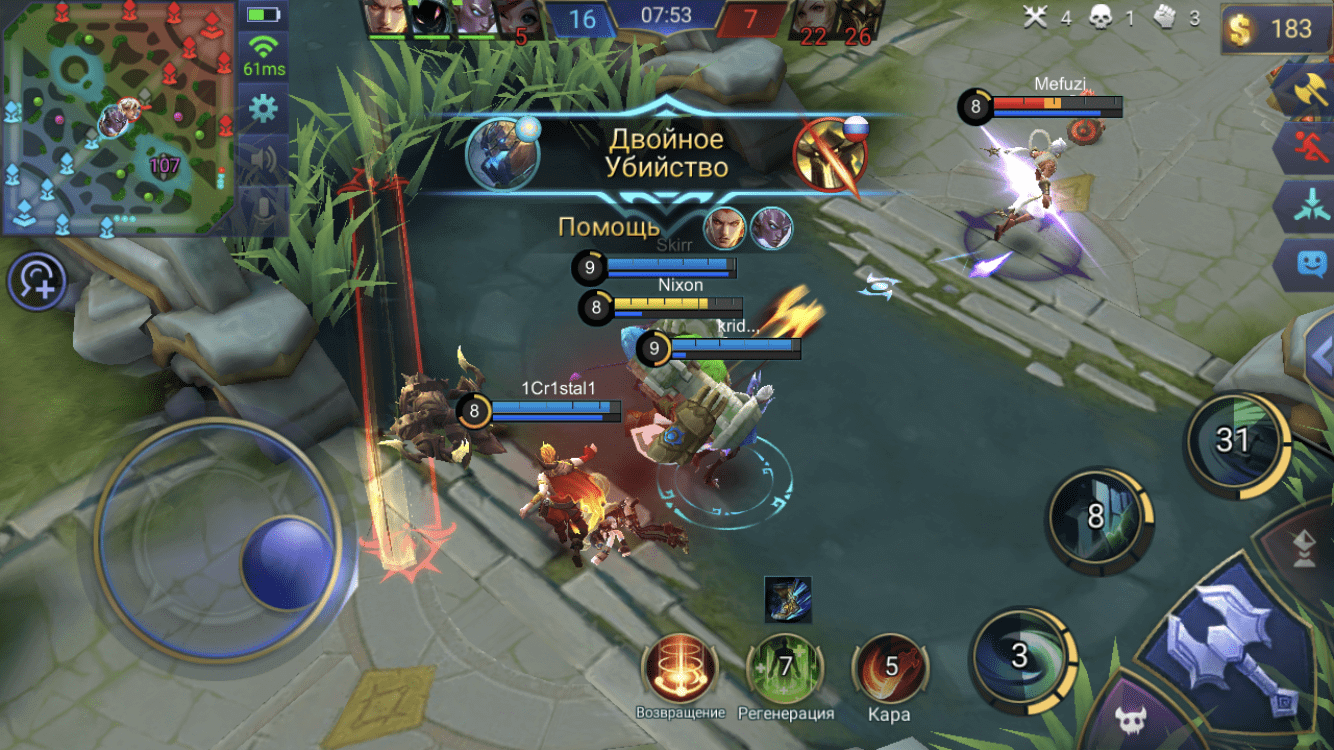 Jump out of the bushes and make -2

You have two targets to protect - a corey and a meeder, if they are both not jumping (Guinevere or Harith, of course, is extremely difficult to protect). In 5x5 fights try to cast walls so as to separate the enemies, it will be especially handy to fight in the aisles (get as much as possible first spell) and near the towers. You can deal an ult to the crowd either when there's a real chance to hit the enemy's kerries and hit them against the wall, or when there's no more initiation in the team. In other cases, you can just milk a stun and get knocked out of the firefight.

Wonderbelka has a good guide on Grok, video below. The only thing worth noting - the video came out a relatively long time ago, so I give the actual build, the rest has not changed.

Please, we try for you!