Remember when a proper full-fledged soccer game with different modes and uncut gameplay used to come out on mobile devices? But then EA Sports turned the game into a donation factory, through which they earn millions of dollars every year, mostly due to the presence of official licenses from FIFA. That's why any little-working version of soccer immediately gets credibility and is in high demand - and so a novelty called Mini Football immediately stood out from other toys. Let's take a look at what it is.

How to play Mini Football

So, Mini Football is a soccer simulator, made in cartoon style, with a full-fledged number of players in the squad (11, not 5). For this, the developers had to go for some tricks, to make a smaller field and the players themselves, but keep the scale, so that the game looked and felt organic. Although the size of the field is reduced in comparison with the players, so the duration of the halves had to be limited - the match takes 150 seconds of real time. The players have big heads - it's so fashionable to do so now, plus this way you can emphasize their individuality on the field. About that later.

And let's start, perhaps, with the gameplay - they tried to make it as easy as possible, so elements of dribbling are completely absent here, no reds (and very rarely - yellows) are given for rude backhanding, any contact with an opponent's player is punished by taking the ball away. Conclusions: there is no way to run down the flank and cross, there is practically no sense to go around and the only remaining option is to "Barcelona" pass in the hope to get the ball to another player's penalty area. To control all this action there are only 3 buttons - sprint (for temporary acceleration), kick (and roll, depending on ball possession), and pass (or change player). No "pass to pass" or "cross," which, again, narrows down the space for strategies.

It's quite difficult to score here, largely because of the nature of the game. You can't make any contact at all with other players here, because then the ball would be taken away from you. You also can't run away at speed - with a greater likelihood they will catch up with you. Or make a roll from behind / on the side and do not get any penalty. Although true, they will, but in 1 out of 10 cases - it's a subjective observation. By the way, since we're talking about Barcelona, you can try to score in Messi style - when the fastest player of your team gets the ball and tries to physically and quickly, using only zigzag running, get to a comfortable distance and shoot on goal. 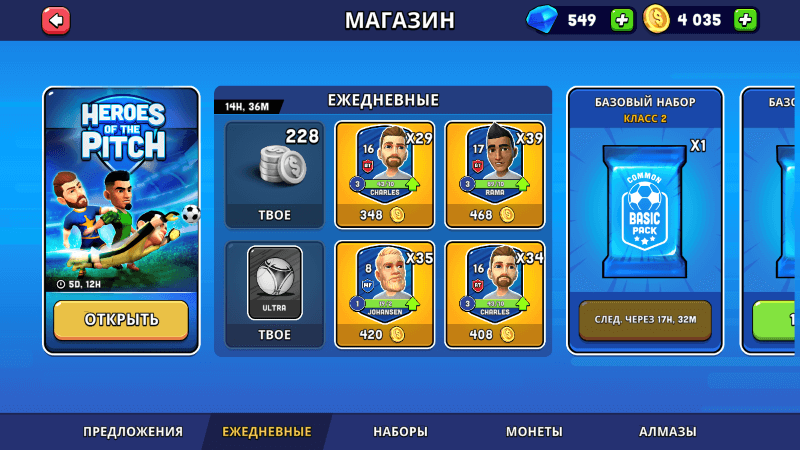 Based on this, we see the following triggers for the goal:

There are several types of players in the game - common (blue), rare (purple), epic (gold) and legendary (black). All of them are dropped from boosters, which are unlocked for 3-8-12 hours and are earned by us after victories. Booster cells are traditionally 4, and not only players fall out of them, but also equipment (soccer uniforms and balls), as well as coins. The higher the level of the match, the higher the level of the booster and, accordingly, its content. 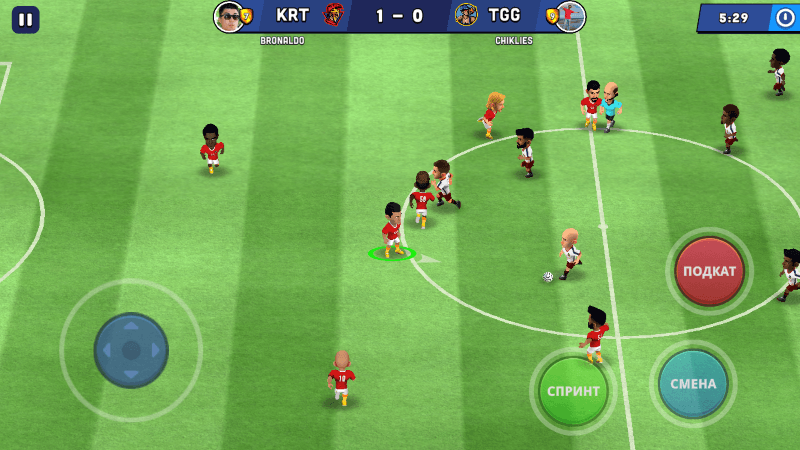 The approach to the matches here is in the style of Tennis Clash, and the picture is very similar to a tennis simulator. The essence is that we have several arenas where we play. Each match costs a certain amount of coins - you and your opponent put them in a conditional bank, and the winner takes it all. I recommend that until you reach a team level of at least 380 stay in the 2nd arena and play for 250 coins, and only when you reach that level go to the 3rd arena. Otherwise you will be caught against players who are known to be stronger than you - their players will run faster, hit the goal better and line up against you in defense. Such matches, as you understand, are a waste of time.

The best tactics in Mini Football

The most popular formation chosen by top players is the 3-4-3. This is due to the fact that there are almost no (or very rare) passes on the flanks, often the attack goes through the center. Therefore it is necessary to saturate the midfield with players, and this scheme allows it. Moreover, you put a strong striker in the center of your attack, and you will have the opportunity to pile on the opponent, catch him in the rebounding and try to roll the ball. The same logic is followed when you choose a 4-4-1-1 scheme, largely to have a so-called "under striker" who will insure the individual actions of your striker. As it turns out, the 4-3-3 doesn't really fit the game because your central defenders are often spread out, giving space to the enemy offense. And the central midfielder is very important, because if he makes a bad tackle or loses the ball, he won't be able to catch up.

The game has no familiar last names, but plenty of references. First of all, the naming of the players and their appearances can be traced back to a nationality or country, such as Rama (Thailand), Kapoor (India), or Smith (England). Secondly, there are references to famous players - Paul (Pogba), Francesco (Totti) or even Bronaldo (who needs no introduction). The last one, by the way, I bought for a donation - not the best investment, to be honest, but it's a kind of piety for an outstanding footballer, sorry for the weakness.

Overall, I liked the game - it's pretty arcade, the first couple of weeks it's hard to get used to playing it. But once the triggers were discovered, and the approximate levels of the opponents were determined, it became easier to play. You have to buy and swing obviously the rarer players, but even they have their own gradation of effectiveness. Here, for example, Haddad at level 5 is slightly stronger than Demir. Unfortunately, we do not have a roll list of players, so we have to determine everything by experiment. It's a pity, of course, that we have to compensate for the lack of a coherent mobile simulator with such wisps, but at least thank you for that, too.