World of Warships - is a game in which the battlefield is the seas and oceans, and players fight by firing and torpedoing from warships from World Wars I and II. The maps consist of archipelagos of islands that make maneuvering difficult and also serve as cover from enemy fire. Exciting and dynamic gameplay will allow players to feel like a real sea wolf. This is aided by the music and sound environment, which transports to the maritime atmosphere. Downloading, saving and installing the game can be done in several simple ways.

To safely download and install World of Warships (WOW), you must have an account on the official site of the game https://worldofwarships.ru

After registering and logging into your account, you must download and install Wargaming Game Centre, launch it and select World of Warships. Then run the installation, select the installation directory of the game. And wait until the download is complete, then install. Everything is standard.

For any download of torrent files, you need a tracker. The most popular tracker on Runet is uTorrent. After installing it, you need to find the game world of Warldships on any torrent exchanger and download through the established tracker.

However, download torrent games are not recommended to avoid the safety of your computer, because there is a high probability that the downloaded game may contain viruses - miners, which are not uncommon pirates embed in the game.

So don't look for torrent files, there is a chance of running into viruses. But go to official website and download from there.

World of Warships Blitz is a mobile version of this game. You can install it from Google Play and AppStore, for Android and iOS devices respectively. 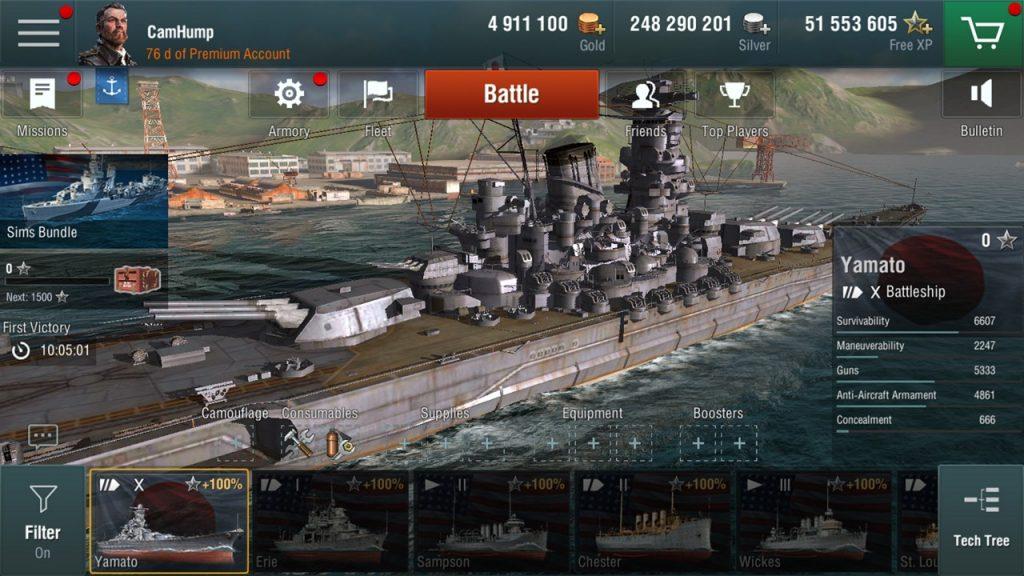 Gameplay, types of ships and types of battles

Initially, it will only be possible to fight with the computer, we can say, as part of the tutorial. After a few battles, our level in the game will allow us to fight with other players. There are 9 ships on each side fighting. The game modes are different, whether it's taking over an enemy base or mastering areas on the map. However, almost each of the battles, ends with the complete destruction of one of the teams, rather than winning, for example, by capturing the enemy base.

WoWs is a game in which the developers have managed to balance gameplay well. Ships are divided into four classes:

Battleships the largest but slowest, they are stronger than the others and have the strongest fire. At the same time, due to their slowness, they are an easier target for very fast destroyersThe first of these is the giant, which, if it were possible for it to approach, could sink such a giant with a few torpedoes. Nevertheless, battleshipIf he hits very well, even one series can sink destroyer.

The intermediate unit is. cruisers. They are worse armed and less strong than battleshipsBut they have torpedo launchers, which battleships are deprived. Thus, each of the ships has its own disadvantages, which can be exploited by choosing the right tactics.

Aircraft Carriers are a solid threat because of their combat power, but they are rather clumsy and slow.

If you are new to the game, it is advisable to try playing all types of ships. This is the only way to decide which ship type is the most enjoyable in terms of gameplay and experience, as well as the strengths and weaknesses of each class of ships will become clear.

At the beginning of the game you should not buy a particular development tree. It is worth playing ships of different countries, because they differ from each other quite a lot. It is better to decide when you get to the ships  Level 5-6.