If you have already played Homescapes, then you know that the main task of the player is to equip a house, decorate it, perform some tasks in the mini-games. The more puzzles you solve, the more money you get to your account. If the first levels can be passed without much effort, then further you will have to work hard, and if you have difficulties with the levels, I recommend to visit the large article with tips How to pass levels in Homescapes. About how to earn extra money, stars and get lives in Homescapes, as well as secrets and tips on passing Homescapes - we will talk further.

Download Homescapes for free in Russian from the AppStore.

Contents hide
1 Video gameplay and how to play Honescapes in general
2 Characters
3 Life
4 Task Sheet
5 Bonuses in the game "Three in a row
6 How do you get extra lives?
7 Extra Money in Homescapes
8 A few secrets and tips for Homescapes

Video gameplay and how to play Honescapes in general

The main character of this game is the butler Austin, who came to visit his parents and finds out that they find it hard to keep the house in order, so they want to sell it. But Austin does not want to sell the house, where he spent all his childhood and with so many memories, so he asks for your help. And you work with him to fix up the mansion. You can change your name by going to the settings - they're in the upper right corner of the screen - and clicking on "Edit Profile.

In the game you are given five lives to complete the levels. A new life appears every half hour. If you waste your lives, you can either wait for them to regenerate or speed up the process:

It is located in the lower left corner. It contains tasks that need to be completed. You get coins and stars for completing the levels. You need these stars to complete the task. Their number can be different - 1 star or more. Tasks are quite different - from feeding the cat to put a mirror. And the stars are also needed for the transition to a new day. You spend a star, but you get some kind of gift - coins or bonuses for the game.

What else is interesting on the tablet?

But the main point, as you have already realized, are the Tasks, by completing which you move forward and unlock new levels.

Bonuses in the game "Three in a row

To move to the next level you need to play the game "Three in a row". For a certain number of moves you need to collect some chips: green cups, yellow lamps, blue squares, red bows, pink buttons and many other things. Sometimes you have to guide an object to the bottom of the playing field, such as donuts.

In the passage of this game helps different bonuses:

There are many other bonuses, but these are the most basic ones that you can collect yourself in almost every game. Use them as often as possible!

How do you get extra lives?

Each player in Homescapes tries to make his house nicer, more beautiful, to buy the best for him, but the levels are constantly getting harder, so it's harder to pass them. Because of this you lose time and hp (health points). To avoid wasting time, you can resort to a little trick:

Do not forget that along the way to collect all the bonuses such as missiles, balloons and bombs, and resort to tricks only if you can not pass the level for a long time.

Stars in the game Homescapes you can get after passing some levels, and they are needed to improve your home. It is better not to download the hacked version, because all the accumulated will be deleted, you will have to start again.

Getting extra money in Homescapes can be quite easy, but it is important to stick to the recommendations regarding saving lives, because then the money will remain intact. In this case, you may need the money only for hp or in extreme cases. You can also sign up for Facebook, for which you get up to 100 coins. 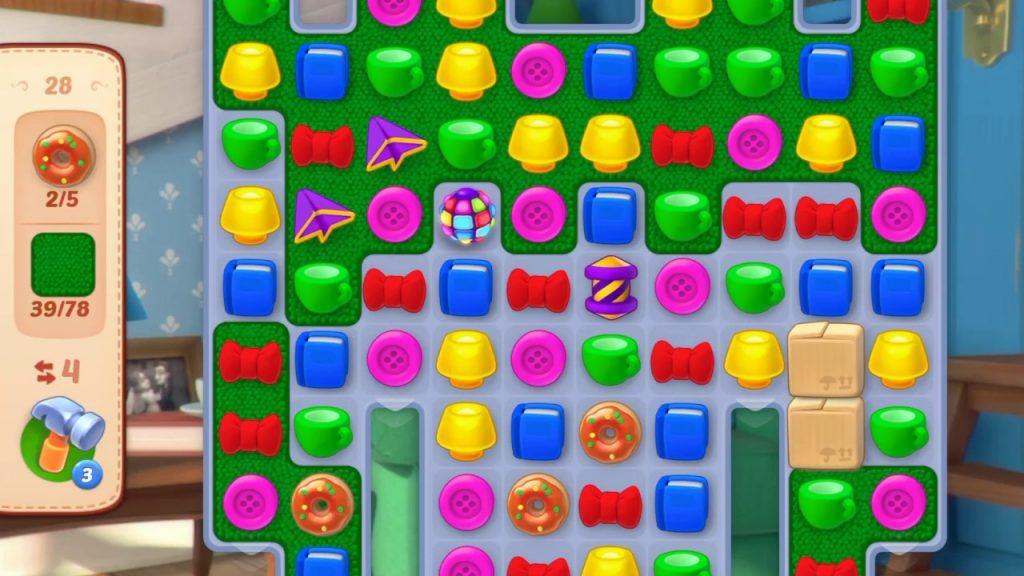 A few secrets and tips for Homescapes

Since for each task the player receives coins and money, you need to know how to properly dispose of them and remember a few rules:

Remember that Homescapes is both a house simulator and a strategy game, so pay attention to the current objectives and goals in the game, and calculate your moves in advance. And bonuses and stars will make it easier to play.