Not long ago we wrote article about Mobile Legends MOBA, how to play, who to play, and which characters to buy. It's season 12 of Mobile Legends and Harley is one of the top characters and mages in this season's melee. However, I'll point out right away that the character doesn't pull off solo. That is, they are quite difficult to make the difference in class, but he is very strong in team play. I'll tell you how I play as Harley, what tricks I use, and give you some tips on the character. 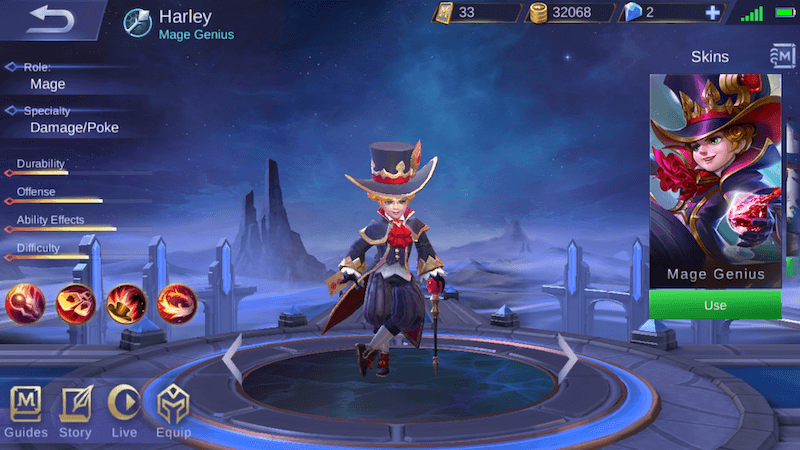 I only got to Grandmaster on Harley and I've only played 70 games, so I'm probably not qualified to advise "mifics" (rank - Mythic) on how to play Harley. I will try, however, such a guide will be useful, first of all, for those who are just starting to play as this merry mage. To begin with, let's go through his abilities, so that it would be clearer to describe the tactics of playing for Harith.

Contents hide
1 Harley's Abilities and Skills
1.1 Passive ability - Master of Magic
1.2 Active Abilities - Poker Trick
1.3 Escape from Space
1.4 Deadly Magic
2 Equipment and Build
3 Guide and Tips for Harley from Mobile Legends
3.1 How to play as Harley
4 A guide to Harley by the player Zverko
5 How to Play Harley by Wood Grandfather

As a master of magic, Harley's base attacks are 60 (+50% physical attack + mag attack) magic damage.

Harley throws 3 turns of cards in front of him quickly, dealing 150 (+25% magic power) magic damage to the first enemy the cards meet. Damage is reduced when hitting the same target. And increases attack speed by 5% for each hit. Adds up to 8 times, lasts 3 seconds.

Momentarily disappears, leaving a magic hat in its place, appearing in the specified place and increasing its movement speed by 30% for 2 sec. If you use this skill repeatedly, for 4 seconds, Harley will return back to the hat he left behind.

When used, throws a ring of fire at the nearest enemy in sight (the ring can be intercepted by another player), deals 200 (+60% mag power) magical damage on hit and generates a ring around the target for 4 seconds. It's not very clear from the help, but the point is that if you deal more damage with cards and auto-attacks to the character you've launched the ring at, but the damage 4 seconds after the explosion will be gigantic.

I use pretty standard builds. I think that everything was already invented by Koreans before us and we should trust them, because the basis is not the build, but the skills. The ability to burst in time, the ability to pour damage in time, leave, move around the map, understanding the timing of other players and so on. That's what the skill is all about.

And an alternate assembly:

As can be seen, the basis is Wand of Lightning, Concentrated energy и Divine Sword. The rest is situational, but all directed to increase magical powerwhich directly affects Harley's damage.

Guide and Tips for Harley from Mobile Legends

First of all, what is important to realize and accept is that Harley is not a fighter. I mean, yes, it seems that it's always possible to escape from a fight without getting punched in the face, but that's often not enough. Any stan (stun) takes us out of action, and it's a cakewalk to take out a wad mage.

The second thing to pay attention to is the forest. It makes no sense to fight the enemies right away. Our first task is to get the ultu, as soon as possible - to get level 4. After that you can already try to kill the characters of the enemy team.

Now I will tell you in detail how to start any rink, including purchases.

With how to start any fight sorted out. Now about how to play Harley in general. On the one hand, the character is quite simple, but on the other hand, it requires your skill.

How to play as Harley

The perfect tactic for Harley

But in life, of course, things are a little different, although the essence does not change. You have to practice, and then you will be able to do it. You can practice on mannequins in the training game, I did it that way.

It should be understood that if you throw a "ring of fire" (Ulta) and don't sell with a deck of cards or auto-attack, the explosion will be for the enemy with nominal damage. I.e. there will be no damage at all, so always use the ulta with only 1 skin (poker trick). Clearly, there are different situations.

To summarize, Harley is a magical hunker. He can't take out an entire team at once like the same Lunox or Gossen, but in popping out from behind the armored backs of tanks, dealing colossal damage and jumping behind the backs is the perfect play for Harley.

Of course, she also has countercharacters. Basically, these are all characters who can stun and stan:

Against them you have to play very, very carefully. After all, in order to sell them - you need to come (jump) up close, and if they do not use the ulta = death of your character. That's exactly the skill I wrote about above - being able to jump in time to give back the ult, release the deck.

Who is too lazy to read it all, you can see the guides, not ours, but proven people.

A guide to Harley by the player Zverko

How to Play Harley by Wood Grandfather

That's all for now, I'll add more if I remember anything.