The Hay Day game is one of the best and most popular farm stimulator games. Here you have the opportunity to feel like an entrepreneur, planting your fields, expanding your territories, trading with your neighbors and creating the perfect farm - one that you have dreamed of. Today you can learn the main secrets and tricks for passing this fascinating game. Let's go!

A little about the game itself. You can play from the age of four, which will help develop memory, organizational skills and diligence. Hay Day is a free game, but it allows you to make purchases for real money, such as diamonds in different containers (a bag of diamonds costs 379 p, a box - 1490 p, a box of diamonds - 2990 p, etc.), farm kits and gas pedal kits for different prices. If you don't want to buy something for real money, then go to the settings of your device and turn off the built-in purchases.

A minus of the game is that to play it you need an Internet connection. And this is not always convenient, because not everywhere has it. For example, you won't be able to play Hay Day on your way home in the subway. But at home you can enjoy the game to the full, because it is all very well thought out: smooth, not jumping control, clear graphics, traced details and many other advantages. Even if you miss a couple of days, nothing bad will happen: none of your animals will die, the crops won't be pecked by crows. So don't be afraid and get down to this interesting game! 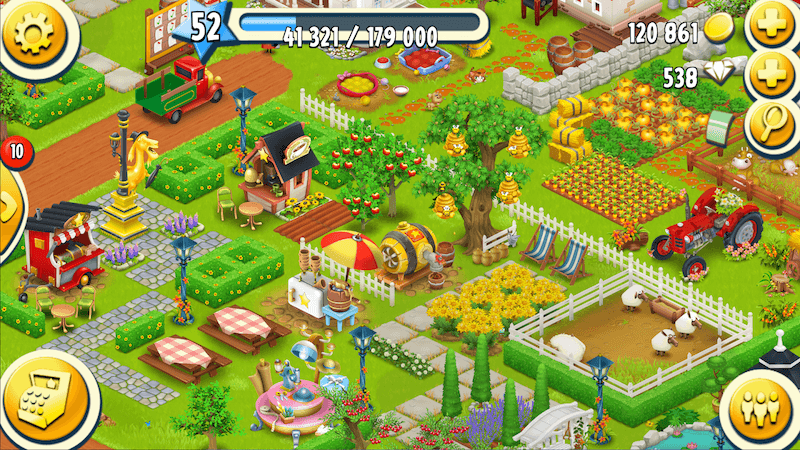 Contents hide
1 Managing
2 Money
2.1 Where you can find a gift or a surprise every day on the farm
3 Animals
4 Store
5 Field
6 Fishing
7 Mine
8 City
9 Neighbors and Races

At the beginning of the game you get a small plot for a farm. The game has tutorials that show you how to sow and harvest crops, how to feed the animals, and how to benefit from them. With the crops you can feed the animals, collect them and process them, such as baking bread, which you can then sell and earn money. After level 17 you will be able to build a port, and with it it is much easier to ship food to other places.

To reach the next level you need to accumulate a certain amount of experience points, which you get by communicating, selling goods to other players, for harvesting and completing tasks. Experience points are blue stars that fill up the scale over the course of the level, which is located at the very top of the screen. If you click on the star, you will see the player's statistics.

The animals in the game are very cute. What are they useful and how do you deal with them? There are chickens, which bring you eggs; pigs, which give you bacon, cows, from which you get milk, cheese, cream, and many others, which are discovered gradually, at different levels. You can have dogs, rabbits, various cats, donkeys, horses. By feeding them, you get points. If they fall asleep, you can wake them up and get bonuses for that as well. Regular, not pets, but working animals need to be fed by using the crusher to grind their food. And then you just click on the animals you want to feed and give them food. 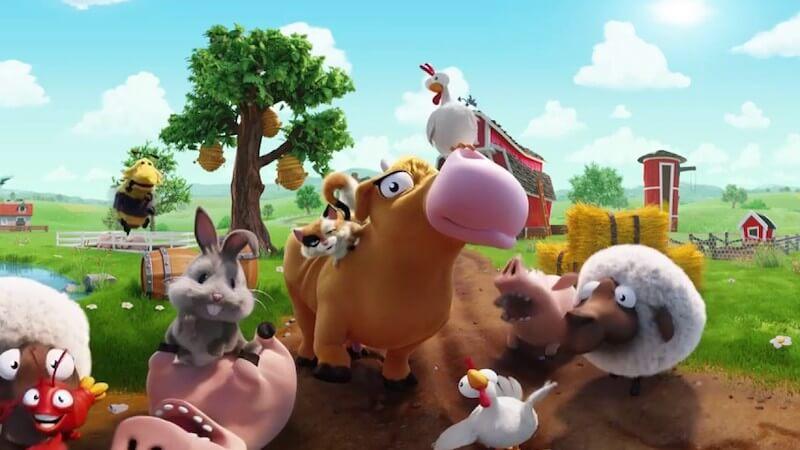 There are also wild animals (foxes, frogs). To catch a fox, build a fence so that there is an entrance, that is, that there are not solid stalls and paths, but a place where the fox can enter. Then plant a little farther away blackberries, raspberries, honey plants-something sweet so that the foxes, who love sweet things, will come in and settle in. After a while, when you've collected the number of chanterelles you want, build a fence and they can't get out. But it is still better not to make them nervous at first and not to press your finger on them, otherwise they will be afraid and run away.

What about frogs? How do you breed them? Drag the pond, which is behind somewhere on the farm, to the place where you want the frogs to live. After that, push the grass around the pond and frogs will start jumping out of it. Then you drag the pond to its place, but the frogs stay where you "settled" them.

In the store, which is at the bottom left of the screen, you can buy many useful things. These can be animals with their descriptions (for example, a chicken produces an egg in 20 minutes, or a cow produces milk in 1 hour), territories (fields, pastures for cows), and buildings (chicken coops, dwellings for animals). 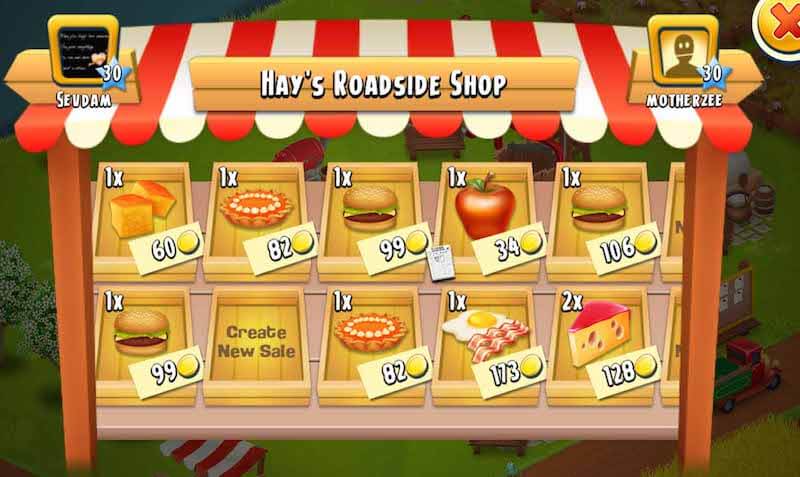 There is also a kiosk where you can put your goods for sale. In addition, you can adjust their cost manually, and choose those items that you can sell and which are better saved for other tasks.

It's simple here. First you have to plant the plants, then, after a while, collect them. With new levels new plants appear. Plant them wisely. There are popular plants such as wheat, corn, they are often used for bread, rice is used to make sushi, and a lot of rice is used for this. But it is better not to plant too many pumpkins, they are not very marketable. Peppers are best not wasted definitively, they are always used in sauces, ketchups, pizza, and they are hard to get, so plant more of them too. 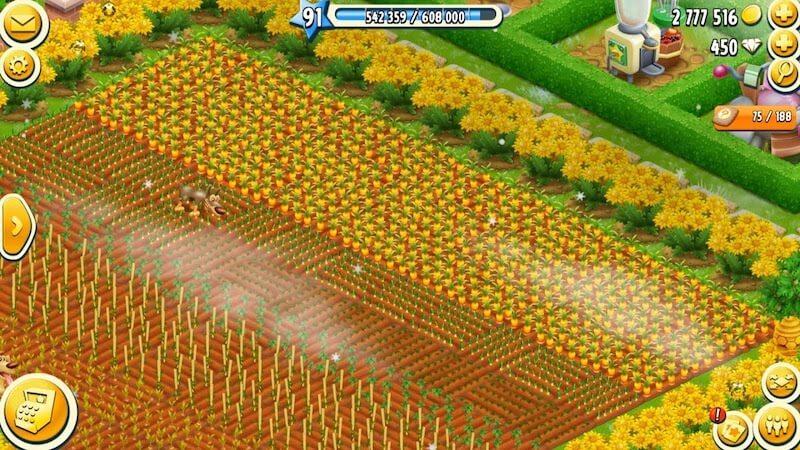 Also plant honey plants and don't forget to collect nectar. At first you will have one honeycomb, and if you don't watch your nectar collection regularly and collect as much nectar as you can, it's hard to get a third honeycomb. Why is nectar so important? It is used to make honey or beeswax on a honeydresser. The wax is then used to make candles, made in the candle maker, and the honey is used to make ice cream, pies, and other goodies. So don't forget about collecting nectar.

If you're not a fisherman, don't feel bad: now you'll learn how to fish properly in Hay Day. Let's talk about the baits. They can be red, green, blue, purple and gold. The red one is free, but you have to spend an hour and a half on it. The others require vouchers. If the fish can be caught with baits of two colors, such as blue and gold, it is better to use the more common, that is, blue, and gold is better not to use often, it is more difficult to get (in the sense of a voucher is more rare). 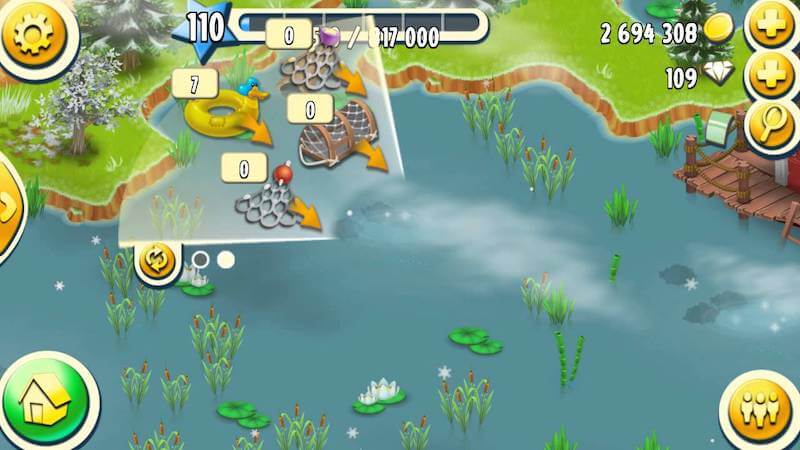 Varieties of fish that can be found in all fish zones:

Varieties of fish not found in all fish zones:

The mine is available from level 24. In it you can mine ore, minerals such as gold, silver, iron, coal, etc., sometimes diamonds. To mine all this there are tools such as picks, shovels, dynamite and other explosives. What to do with all the goodies mined in the mine? Melt it down into ingots and send it off by truck, or you can sell it, or keep it for yourself, so to speak, to save it for your personal use (when you build and improve your train in town). 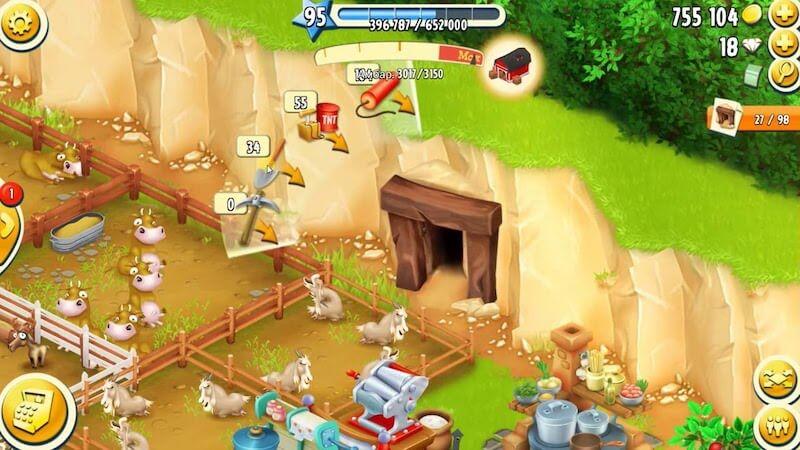 Speaking of the city. Level 34 will open you access to the city. It has many buildings, but the main ones are the Town Hall, the private train and its stopping station. Visitors who come by train need rest, they need to eat and have fun - and that's why you can expand and improve the city area with hotels, eateries, cinemas and other establishments that help you earn money and help visitors take advantage of your services. The level of visitors to the city is influenced by the level of the Town Hall, so it's a pretty important building. 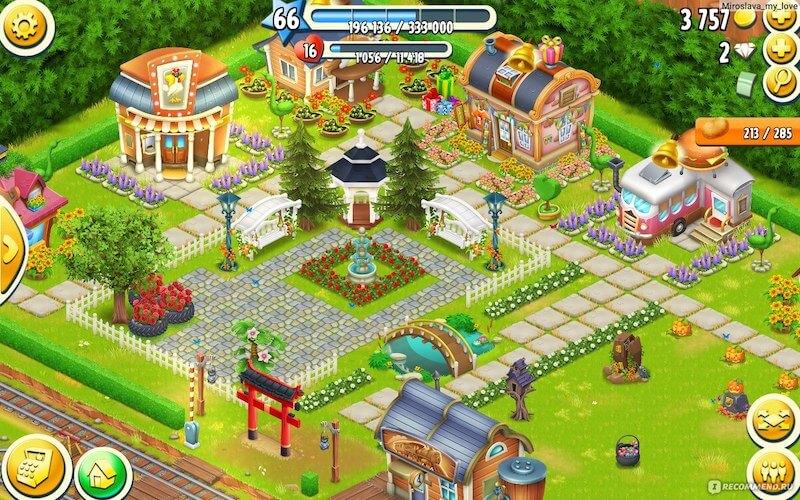 Other players can team up with you in the neighborhood, and it helps to swap groceries, helping if someone needs help sending groceries. As mentioned before, you get thank-you notes in the mail and a catalog in which you can choose a closed box with bonuses and prizes. Prizes can also be won at races that are held every week between neighborhoods. They have different tasks to complete, and the totals add up, with more rewards for prizes (1st, 2nd, and 3rd place). 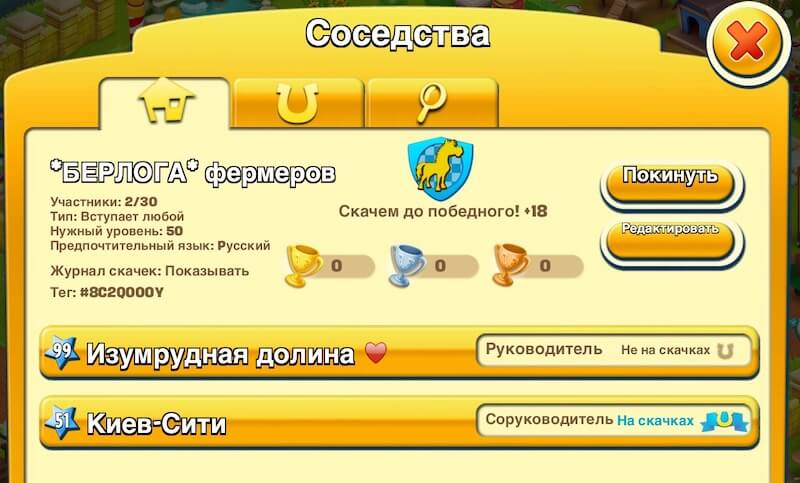 Which tasks to choose? The ones that give more points, it helps if you want to be in the prize position. It's also better to choose tasks that are quick to complete, like the mining task or collecting eggs. Choose a task and tap to start it. But if you don't want to do the task, just delete it: tap on the garbage can and confirm that you're dropping the task. There's nothing wrong with that, it's better to take another, easier and quicker task for you, and earn points, than to agonize with a difficult one, but for which you won't get as many points. After a certain time (most often 30 minutes) a new task will appear instead of the deleted one, which can be completed.

Also. Secret: Don't rush to spend resources before you pass the races. Conventionally speaking, stockpile explosives rather than blowing up the mine for nothing, and when the races have such a task, it will be easy for you to complete it. Or if you come across a task to collect presents from guests in the city, it is better to serve these guests, but not to take presents from them, but send them to snack bars or to rest. And when you see such a task at the races, you will choose it and can collect gifts from a large number of people at once, thus completing the task, earning points and getting ahead.

Perhaps, these were the most important tricks for passing the game Hay Day. Use these secrets and tips and have fun playing!