When Archero appeared on the App Store, few would have guessed that it would become a very popular time-killer. Although there were all the prerequisites for this - the vertical format, the most simple gameplay and interface, "infinity", as well as a few other things that few people paid attention to. As a result, it turned out that Archero is now a very popular arcade game, which is played by a huge number of people around the world. It turns out that the developers made $35 million in 3 months - even though the game itself is free.

How to play Archero

Well, everything here is pretty simple - we control a shooter who runs around the locations and kills monsters. At the bottom of the screen there is a huge joystick, which is responsible for moving the protagonist, the shooting is done automatically. The game is divided into several locations, which, in turn, consist of several levels. With each new level the enemies get stronger and more sophisticated, and every tenth level is sure to meet the boss. A lot in Archero depends on your personal control - if you will just stand still, you will be killed on the first two levels. That's why you must use the hit and run tactics - after each shot you make a step to avoid being hit by stray shells.

For killing monsters you earn money, which you can then spend on upgrades - the character progression here is poor, and consists of 9 elements (talents), among which are the traditional health, damage, attack speed, damage resistance. Once you find the first weapon (or rather, any item at all), then you will open the corresponding tab in the main menu, where you can change your archer appearance, weapons and armor. Which, of course, are categorized by rarity level and greatly enhance your initial stats.

There are a total of 4 weapons - bow, shuriken or tornado (there is a built-in skill), scythe and sword (high attack speed and low damage).

The Shuriken (tornado) is a very serious item that does good damage and also has top-end passives. However, it is difficult to find, and given that it returns to your hand, double damage on monsters does not always pass. Accordingly, the total damage of the item is reduced, plus it has no knockback, which some players may not like, and also will not be very relevant when there is a large cluster of milish enemies.

The sword is usually chosen by experienced players and because of its peculiarities does not quite suit beginners. Sword hits 50% faster than Tornado or Bow, 80% faster than Scythe. On the other hand, it does 20% less damage than the Bow, and 65% less than the Scythe. Plus it's hard to get used to the attack animation, because you can get so many skills that the game won't correctly display hits on enemies. As you can imagine, it makes sense to choose "discard" for the sword to keep enemies at a distance.

Scythe has the highest base damage in the game, but also, logically, the lowest attack speed. True, it is chosen because of the knockback and the ultimatum "hit to the head". The latter allows you to kill with 50% probability an enemy with a single hit, whose health is below 30%. The scythe is incredibly fast at clearing up locations and is basically considered the most effective weapon in the game.

The Bow has an interesting situation - it reloads as fast as the Tornado; it's quite fast as the Sword; you can find a good combination of abilities on the Bow that together will do the same thing as a "head hit," but these positive aspects are not enough to keep the Bow as a top weapon. It's all about the fact that you need a combination of several factors at once for a bow to be effective - good skills, good items, a convenient location. This synergy may not work, and then the bow will have to be discarded in favor of a better weapon.

[UPDATE]: already six weapons - added spear and staff. They are now considered the top weapon, the other four "default" weapons are shifted down the range.

The spear has increased damage and high attack speed (with almost no significant reduction). This allows you to inflict good damage, especially if you take into account the passive - when you hit the same monster, the damage increases. Some consider it basically the top weapon in the game, but it depends on your playstyle.

The staff throws opponents back, it is faster than a spear, but hits weaker. However, the more damage you do, the more chance of hitting that target. If you don't have epic staff, you can run with a scythe.

There are 5 types of armor in the game, each has its own specific indicators, see what is important to you at the current stage of the game.

You can choose two of the four, they increase your attack against flying or milish monsters, as well as depending on the range of fire.

There are four of them too - a bat (breaks through walls), an elf (single attack), a ghost (splash attack), and a mage (piercing spells). In short, the elf is the worst option.

At certain times you will be offered the opportunity to choose one of several skills to help pass the dungeon. Here's the Archero skill roll (and not only that, it's also the coolest roll on the internet): 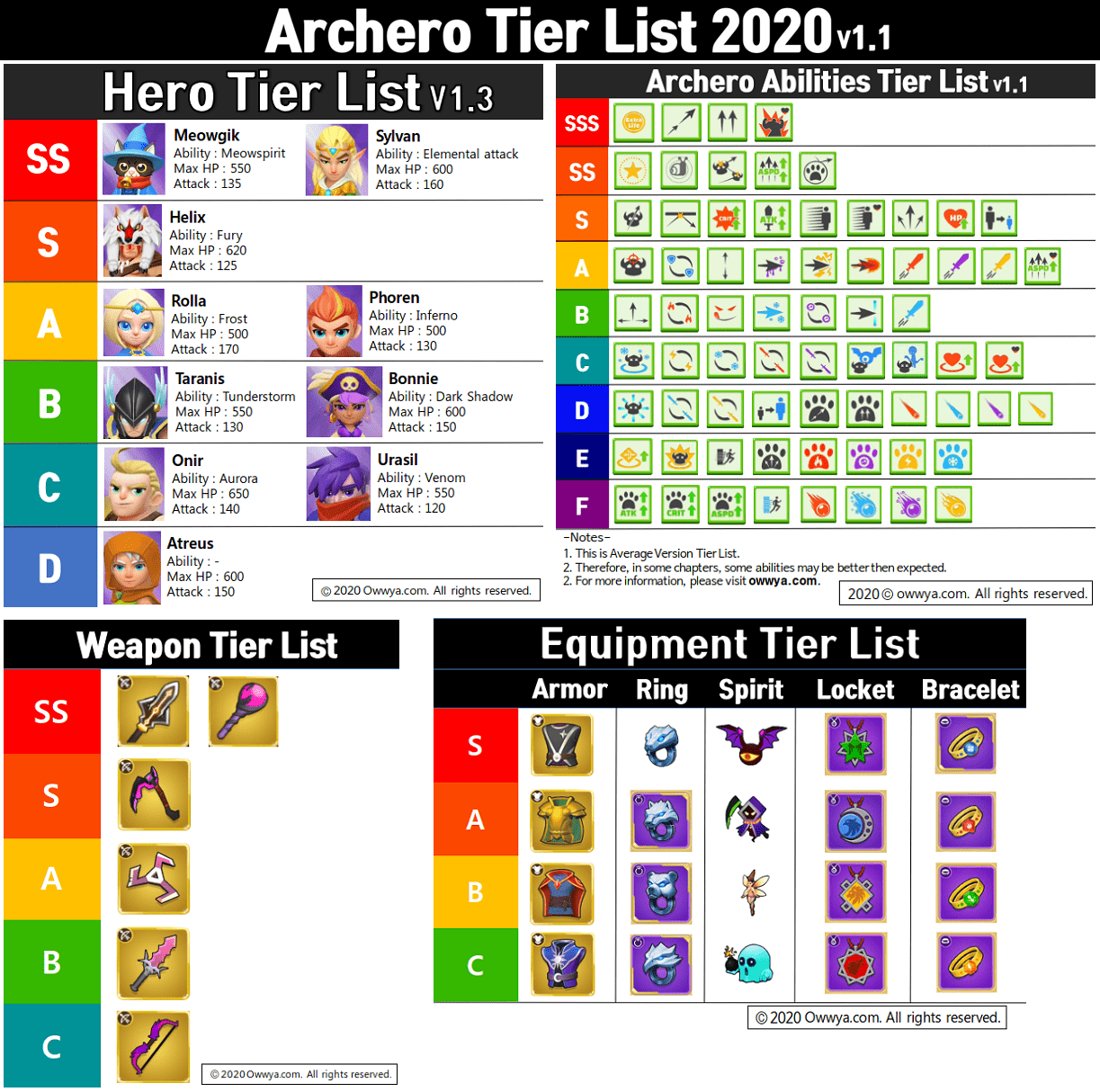 That's all for now, but the guide is constantly being updated. If you have anything to add, please write in the comments!