The essence of the game Fallout Shelter from the world famous Bethesda - it is necessary to develop an underground shelter called "Walt-Tek" right in the middle of the vast wasteland, to repel the attacks and make sure that everyone is not dead, but also remained in good health and were happy. All this is seasoned with a healthy irony and humor, as well as characters from the well-known game Fallout. Dress up your charges, arm them. Give them some fun, sex and rock and roll, and they will give birth to a healthy offspring that can cope with all the dangers. We'll tell you the secrets and tricks of Fallout Shelter and write a little guide for beginners. All you have to do is stick to the tactics and follow the tips, and then all the inhabitants of your dungeon will survive. 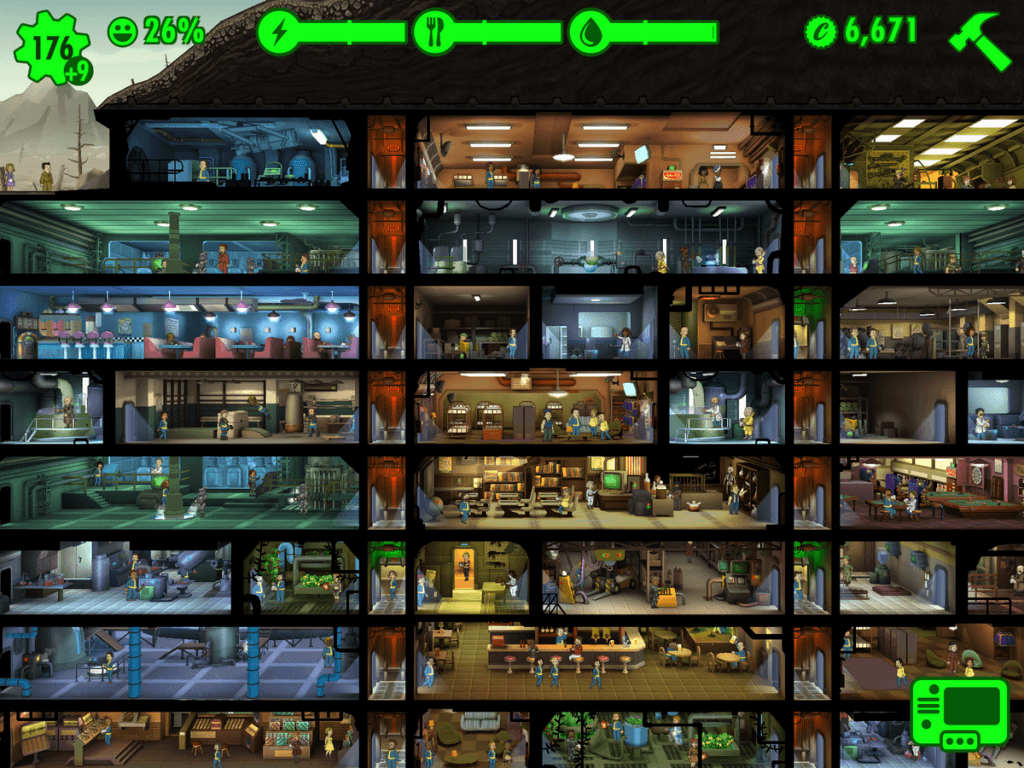 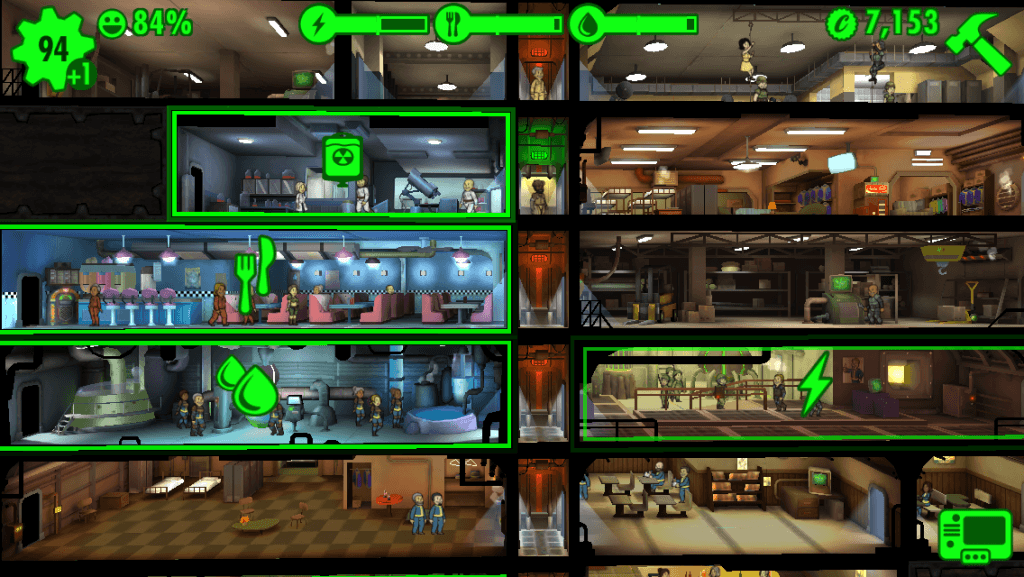 Some tips for newbies on building a shelter in Fallout Shelter

The only difference on the first floor is that the vault door is two rooms (and oddly enough, it holds two people, not four), and the elevator (1) starts right after that.

If you don't already know, even though there's a mountain above you, and it would seem that you could build something in it too, second floor, third floor - no, you can't build anything up. The first floor - with the front door - and from there only downwards.

Building three-room versions of rooms is more profitable than upgrading. Assuming, of course, that you have people to work in it. If you don't have people - your non-pregnant ladies urgently need to rest in living quarters/apartments...In the end, you will have many floors and many rooms. A very good way to make it easy for yourself to navigate through them is to build rooms in vertical pairs (e.g. Garden and underneath another Garden). This doesn't apply to training rooms - you won't need that many. It doesn't apply to the production of stimpacks/radpacks and radio stations, either.

How easy is it to navigate workout rooms? And line them up one below the other, in the order of the letters of the word SPECIAL.

For the same reasons, maybe try not to upgrade the Power Generator/Water Treatment/Diner. You won't feel sorry for the money when you tear it down; and the drawdown on that resource will be less noticeable in the period from tearing it down to building the advanced version.

You can only tear down a room that has nothing on one side (left or right) of it! Because of the factors described above, it makes sense to build in Column A - production rooms (Power/Water/Diner), because they will always be empty to the left and can always be demolished; in Column B - living quarters, training rooms, stimpacks/radpacks production, radio station; in Column C - warehouses and possibly small branches of training rooms. By the time you open the Nuclear Reactor/Water Purification/Garden, you can build them in Column B as well.

Have you ever wondered what Endurance training is for? (Well, apart from increasing your survivability in incidents and in the desert) The warehouse is marked with E, and you can send people with high Endurance there... but it doesn't really do anything. Well, other than having someone to put out the fire or chase away the radotacans. Warehouses work just fine without people. But people with Endurance will work in... Nuka-Cola Bottler. Of course, Nuka-Cola Bottler won't replace Gardens and Water Purification, but the extra resources won't hurt; again, diversification.

Quests of the "dress up 10 people" or "give 5 people weapons" type are passed in a couple of minutes if you already have enough clothes or weapons (even if they are already worn/given to someone). It doesn't matter if those clothes (weapons) have been put on someone before that quest or not - the quest counter only records the fact that a particular piece of clothing within that quest has already been put on, or not! Started such a quest? - Ok, you look for a dressed man, take off his clothes, put it back the same (the counter is incremented), look for the next person.

Quests of the type "5 people went to the desert" is also not more difficult. After all, no one is forcing us to make them travel there for a long time, the main thing is to leave, right? Okay; you throw a person into the desert, the counter is incremented, immediately recall them back, repeat.

Since you already know how the elevators will go, here you go the trick: for the cost of one elevator section you can build two - where you want, and (automatically) right under it! For example, if you have just completed a three-room space in Column B; the space below it is not yet a three-room space (!); you are going to build Elevator 2 to the right of that space; there is no elevator below it yet (no rocks are preventing it from being built, but you cannot build it yet, because it is not yet a three-room space). If you build elevator section 2 in that location, there will be another section right below it!

Have you had any high-level "named" heroes come to you? At first, since they're usually a good level, you can throw them at the hot spots in production; but eventually they're likely to be the best dullers. In between sorties, though, it's a good idea to pump them up to the max.

The essence of it boils down to the fact that you can set a new time on the phone. Let's say you start the extractor at 5 o'clock. Okay. We set the time on the phone to 5 o'clock, start the game - the inhabitant is already at the gate, ready to pass the loot. Pretty cool, right? There is one annoying little thing, on Android this bug eventually works, but on the iPhone as much as not tried - does not work.

The lunchbox bug is simpler. It allows you to get lunchboxes almost without stopping. Naturally, this will make you richer in the game. So, how to become rich in Fallout Shelter without much effort? It's pretty easy to do at the beginning of the game. To do this, you need to wait until you have two of the three quests: 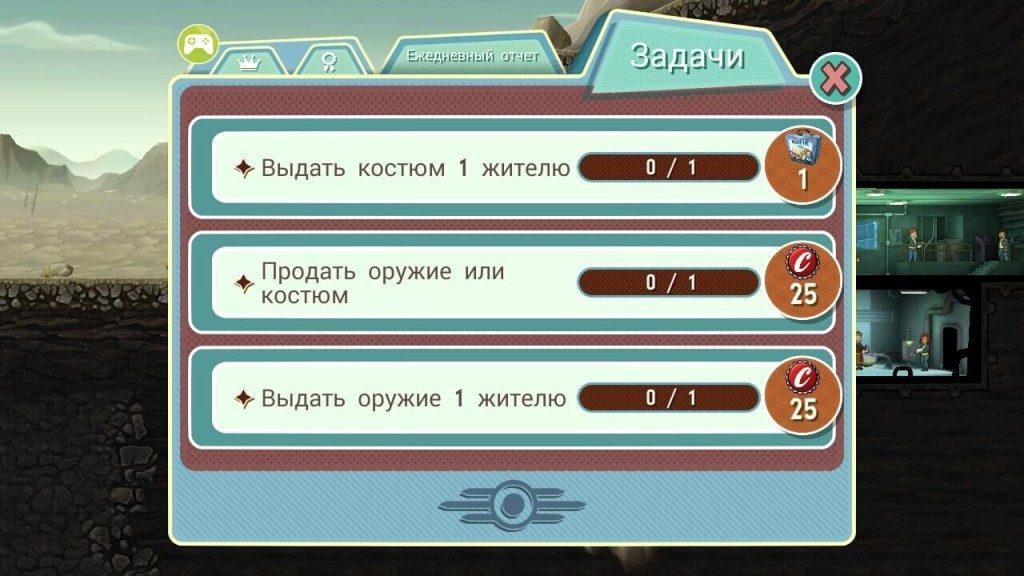 IMPORTANT: Do not complete these tasks. You only need to do the third (not these) task. Then you are guaranteed to get a lunchbox for completing the third task. Okay, I was kidding about the guaranteed one, but 1 out of 2 tasks is a sure thing. Of course it'll slow you down a bit in completing the tasks, but you'll definitely get a lot of lunchboxes that way.

Another way to get free lunchboxes is by following the Fallout Shelter developer's official Twitter account. Quite often they post free codes to get lunchboxes. But I wouldn't get my hopes up for this method, can you imagine how many people are willing there? But then again, give it a try, maybe you'll get lucky too. 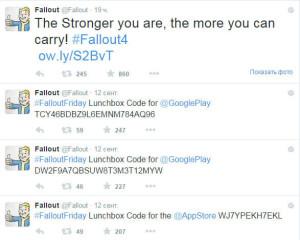 Cheats for the game Fallout Shelter

Video of the coolest residents in Fallout Shelter