It took me a long time to approach Epic Summoners: Monsters War, assuming it was an Idle Heroes clone (by the way, Guide to her and Top 10 I was a little bit curious about the universal heroes), but I downloaded them for free. And you know, I liked it. It's clear that it has a lot in common, but there are also some interesting differences, which I'll tell you about in the article. So, Epic Summoners: Monsters War - first a short review, and then I'll tell you about the best heroes, how to better develop in the game and a lot of technical information.

Contents hide
1 Epic Summoners: Monsters War Guide and Review
2 The best universal hero for every element
2.1 Meta best heroes in Epic Summoners (Tier List)
2.2 The elements
2.3 Dark
2.4 People
2.5 Saints
2.6 Barbarians
2.7 Underground
2.8 Hero Badge - materials to get the maximum level
3 Game tips
3.1 What's the best thing to buy at Bakaleya?
3.2 Is it possible to return the materials for which I promote a hero?
3.3 How do you pass the Blimp?
3.4 Which heroes are better to collect?
3.5 How often are new characters added to the stores?
3.6 What is the maximum star pumping of heroes?
3.7 What are the best heroes to use for people?
3.8 What time do the new servers appear?
3.9 Gift codes - do they exist?
3.10 How do I switch to another server?
3.11 Skills in the Combat Lab, when you change guilds remain?
3.12 How can I change the head of the Guild?
3.13 How much fruit do I need for the event?
3.14 How many crystals do I need for the event?
3.15 How much Exp is needed in the game?

The game, I repeat, is very much like Idle Heroes. Here's a look. First, let's go through the buildings.

Not yet started, I note that the game is a very good tutorial - Our Guide. Very handy and understandable, perfectly introduces the game, although it does not explain everything. But for that you have Apps4Life.

The buildings are finished.

Now for the characters. There are a lot of them. More on them we'll talk below in the guide, I'll try to find and write a normal material on them. Be sure to mention dailies, which are not bad give for his performance - 200 diamonds. But a key feature of these games, let me remind you, is to hold various kinds of events (events), for which are given very good rewards. But the events are built in such a way that it is necessary to prepare for them, to gather resources and materials, and only then can you get the coolest prizes. Or donate. Your choice.

Don't forget to pick up prizes from the Recruiter's Benefit as you progress. If you donate to VIP3, you will collect full rewards. In general, there is a lot tied up with VIP here. Clear work on the desire for rapid progress and unwillingness to wait, but in general, the game is quite playable without donation.

The best universal hero for every element 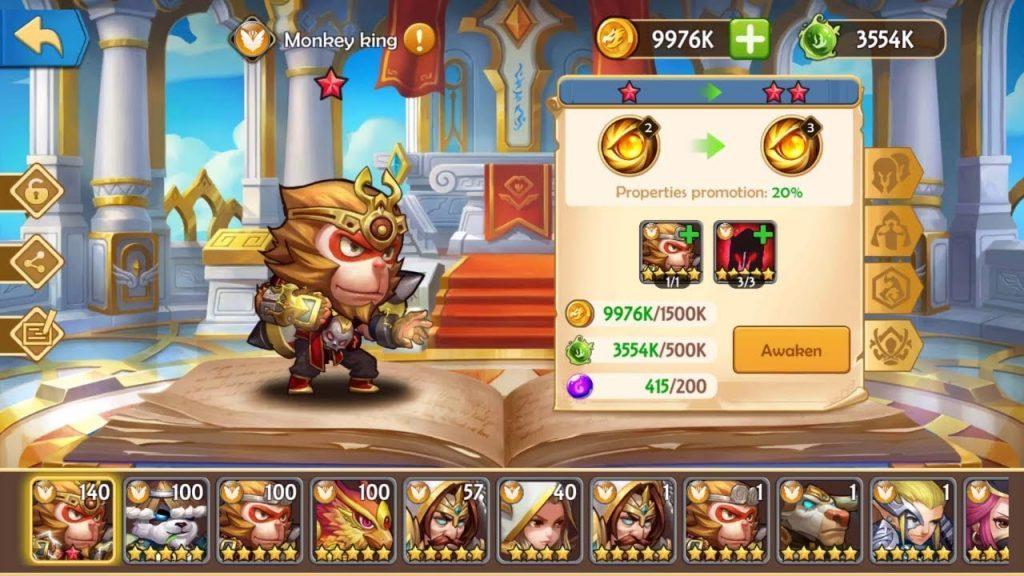 The top heroes are those with the accumulation of skills in damage, passive and defense, plus evasion. Mages are the weakest

By at - best HD quality.

Hero Badge - materials to get the maximum level

The hero badge on the hero becomes active after the hero reaches level 40. Can be:

By at a better picture. 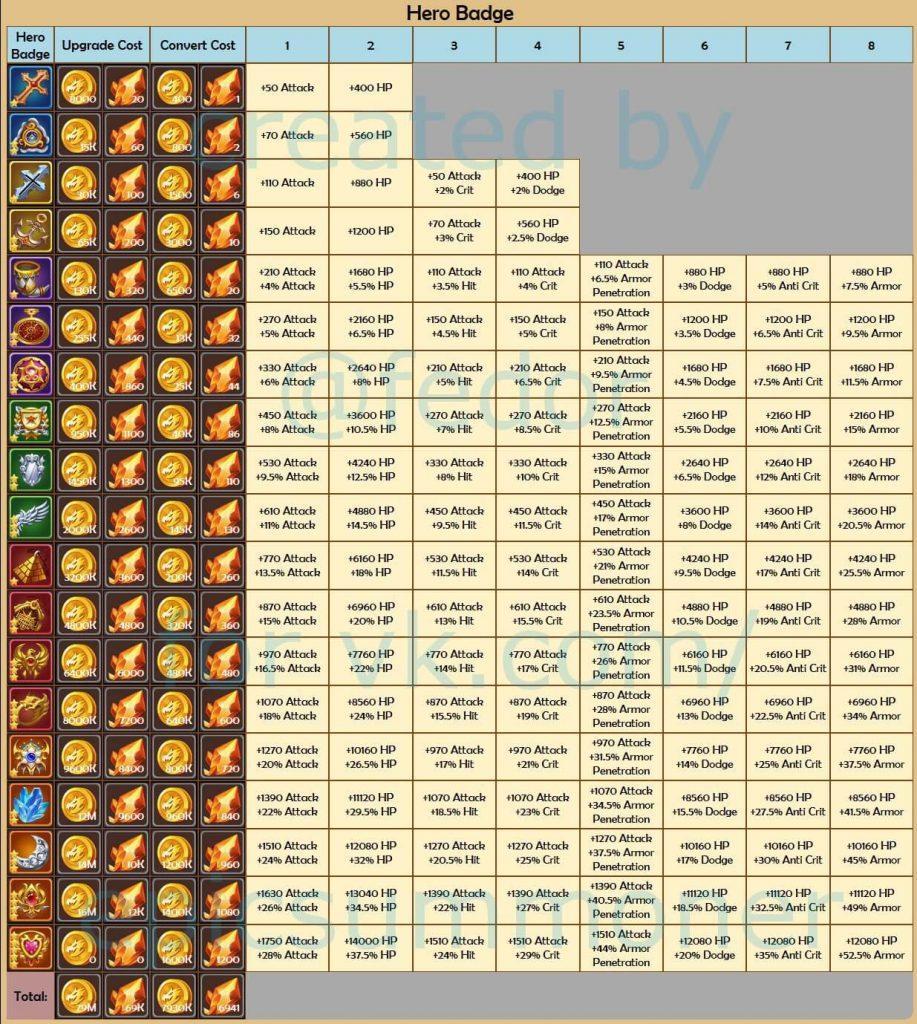 Here are some very short tips and tricks of the game that I have discovered myself or the internet has helped.

What's the best thing to buy at Bakaleya?

В store I recommend purchase only for gold. And only keys for summoning heroes. At first you can have silver keys, then only gold ones.

Is it possible to return the materials for which I promote a hero?

When using heroes as fodder - to get more stellar heroes, you will get back all the cold, soul shards and revelation stones spent on his development, so Don't be afraid to level up your characters.

How do you pass the Blimp?

Blimp they recommend that you take With the help of Panda and Phoenixa, which are resurrected when they are killed. Their resurrection skill will trigger the next round again.

Which heroes are better to collect?

I recommend collect heroes from the same faction. This gives a bonus. At first you can use the "rainbow" bonus or combining 3 heroes from a faction.

How often are new characters added to the stores?

Heroes in the Hero Disassembly Store and the Expeditions Store are the same, changing only the first 2 heroes, every 2 weeks by event.

What is the maximum star pumping of heroes? 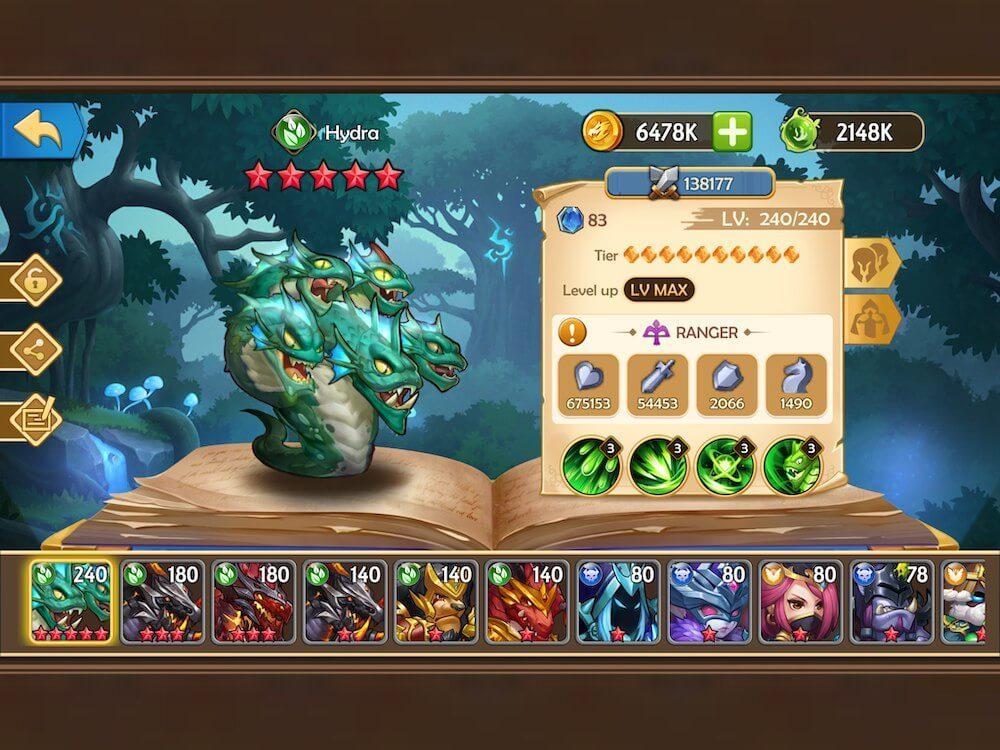 What are the best heroes to use for people?

The faction itself is interesting, due to the bonuses in the form of crits.
That's why it's best to take - Combat General. (Crit 20 % and counterattack 50%), Captain Hook (Crit Blow on 25% and Crit Blow Damage on 30% and 50%) and Black Arrow (critt hit on 30%)
But the faction suffers from low oz and weak armor, so it is best to collect 6 of them for aura with bonus.

What time do the new servers appear?

Gift codes - do they exist?

No. At the moment in the game you can not enter promo codes and those that previously could - do not work. Wait, as they say, until new times.

How do I switch to another server?

Go to Settings - Third tab from the top - Server and click on the server you want to move to. Everything you've gained will stay on the old server, and you'll start from zero on the new one.

Skills in the Combat Lab, when you change guilds remain?

How can I change the head of the Guild?

If the Guild Leader is absent from the game for 3-5 days, then all rights of the Leader pass to the First Officer.

How much fruit do I need for the event?

How many crystals do I need for the event?

Where and on what to spend the diamonds?

Summoning Heroes. But wait until the event to spend crystals.

How much Exp is needed in the game?

Came across an interesting picture, which shows that the expo from level 0 to 107 need the same amount as from 107 to 120. Live with it now. 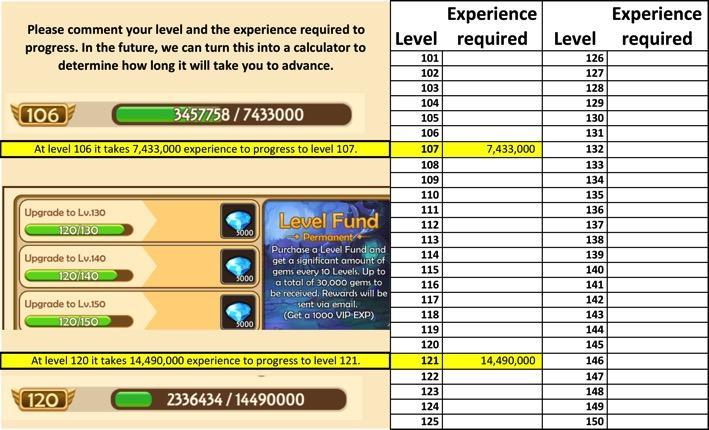