One of the most popular arcade games for smartphones is now considered Big Bang Racing by Traplight Ltd., where players will have to participate in races on behalf of an alien. It looks like the familiar to us all green man with a big head, only his "wheels" will not be a flying saucer, but a fancy SUV. Although as the game progresses, you'll even have to ride a motorcycle and other types of machines. Next, you together with him and his friends, will go to the tracks to overcome the moto-trials, search for pieces of puzzles and maps.

Download Big Bang Racing for free for iPhone, for Android. 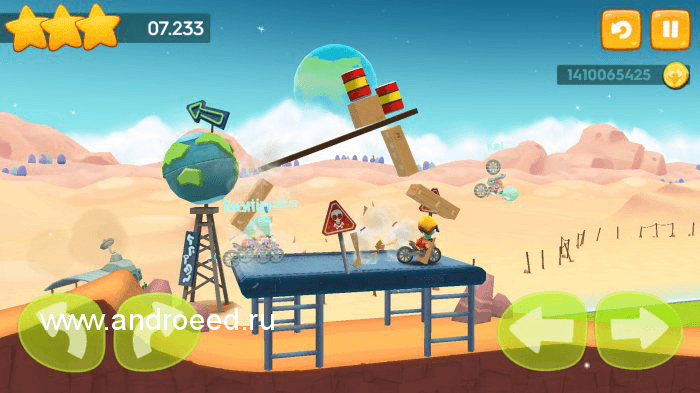 How to play Big Bang Racing?

By downloading Big Bang Racing by Traplight Ltd. for free on Android or iPhone, users will be able to note such advantages of the game as graphics, music, controls, gameplay and appearance. But first things first:

Of the features should be highlighted and bonus mode, where you can get not only coins, but also crystals, and when you build a track with your own hands, you give other participants the opportunity to evaluate it and put the likes. To make your car and the character itself unique and inimitable, given the opportunity to carry out upgrades, improve the performance of the jeep or motorcycle for future victories.

To upgrade and improve your machines, you need money in the form of coins or crystals. You can get them in the lottery, in daily bonus tasks, in the form of prizes for races. Enjoys the fact that the levels for the jeep and motorcycle offers a lot of competitions and tasks, the passage of which requires more than one day. And to make it easier:

Despite the fact that the game is free, it has access to a store where crystals are sold for real money. The only disadvantages are the ads and the long penalties for opening chests without purchases.