With the advent of streaming services, free music apps have become less popular. In principle, this is convenient - for a small amount of money you get access to an unlimited amount of music, and some programs offer their daily selections, so there will be no shortage of content. So, at first glance, music apps seem to be unnecessary at all. But, as practice shows, "not everything is that smooth.

Not as cool as they really seem. These are the problems I encountered when I started looking for a music app:

First of all, an expensive subscription - 169 rubles per month, in my opinion, is not worth it. Especially in the CIS countries, where it is easier to "steal" than to buy honestly. Secondly, not all music is available here - you still have to buy some songs or albums separately.

Although many people may disagree with the price tag - that's okay, once I did not buy a coffee. Yes, perhaps, but it is so subjective and optional that I do not even want to get into such arguments. However, new products appear there with enviable speed, and not only the world, but also some local spill. I was very surprised, by the way, when a friend of mine recorded a light track and uploaded it to Apple Music, it was accepted, and now he's already getting small, but royalties for downloads. It's an amazing thing, your globalization.

An analogy to Apple's service, but more focused on the Russian-speaking audience, which should be clear from the name of the company that is developing it. Access to the library and removal of restrictions costs 169 rubles, which is also not very convenient. However, if you actively use Yandex services (and in general contact with their ecosystem), it is logical to use their option. Some, by the way, note the interesting work of the algorithms - you know that the service selects the music that you like. And if you choose something like Aria, they won't give you the whole discography on "re-record", but will give you Alisa or Kipelov. And sometimes it will even surprise you with SLOT - the choice is sudden, but thanks to it you can find more than one good band whose works you missed.

Traditionally does not work in Russia and Kazakhstan, so it is not considered at all. According to data available on the Internet, the platform will launch in mid-2020, but this was a condition "in a vacuum. And with the current geopolitical situation, everything can change.

[UPDATE in 2021]: It's already working! And, by the way, it instantly takes the first line in the "Music" section. It costs the same sacred 169 rubles (or 4.99 in U.S. dollars), and without the premium version does not allow to listen to music offline, periodically spins ads, limits some content and prohibits switching tracks more than a certain number of times. As practice shows (and enthusiastic reviews on the Internet), a lot of Yandex.Music users have moved there, and an outflow of listeners from Apple Music has also been noticed.

It's not really a streaming service, and until recently was the ultimative solution to all problems with music. Because Vkontakte's library is huge, you can really find any track, and with the advent of podcasts, you could forget about other applications, too. But then it was decided to limit daily music listening to 30 minutes, and for unlimited time they ask 149 rubles. The internal pirate could not stand such a setup and required urgent replacement. And with the advent of Spotify, it ceased to be of interest to most "advanced" users. Although in the post-Soviet space you can often see the status something like "I do not read messages, I only listen to music. Well, not all the songs are here, again.

So we start looking for applications for music that could play it, preferably in mp3 player mode from the mid-noughties. That's when you download music, put it in a folder, and don't bother with syncing, purchasing, and other actions alien to the pirate. There are plenty of such applications in the App Store right now.

[INFO]: Hereinafter the rating is based on the Russian App Store (scores and ratings). 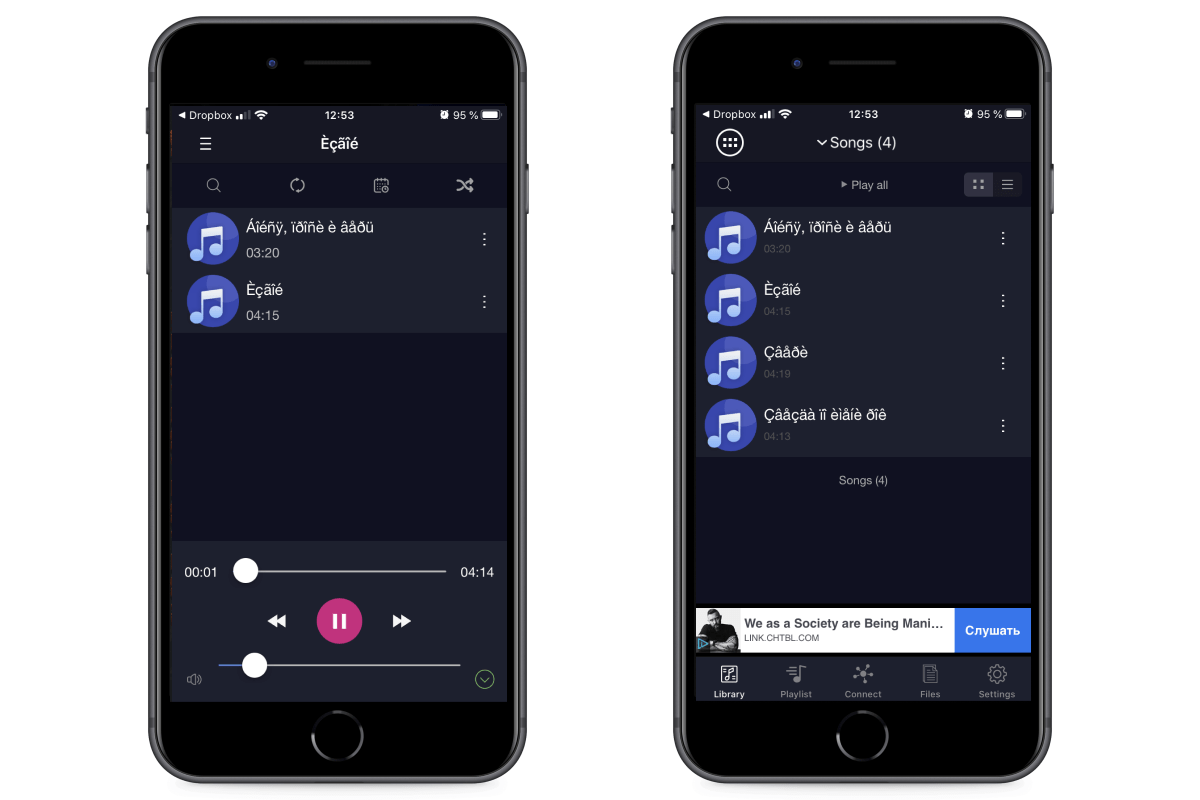 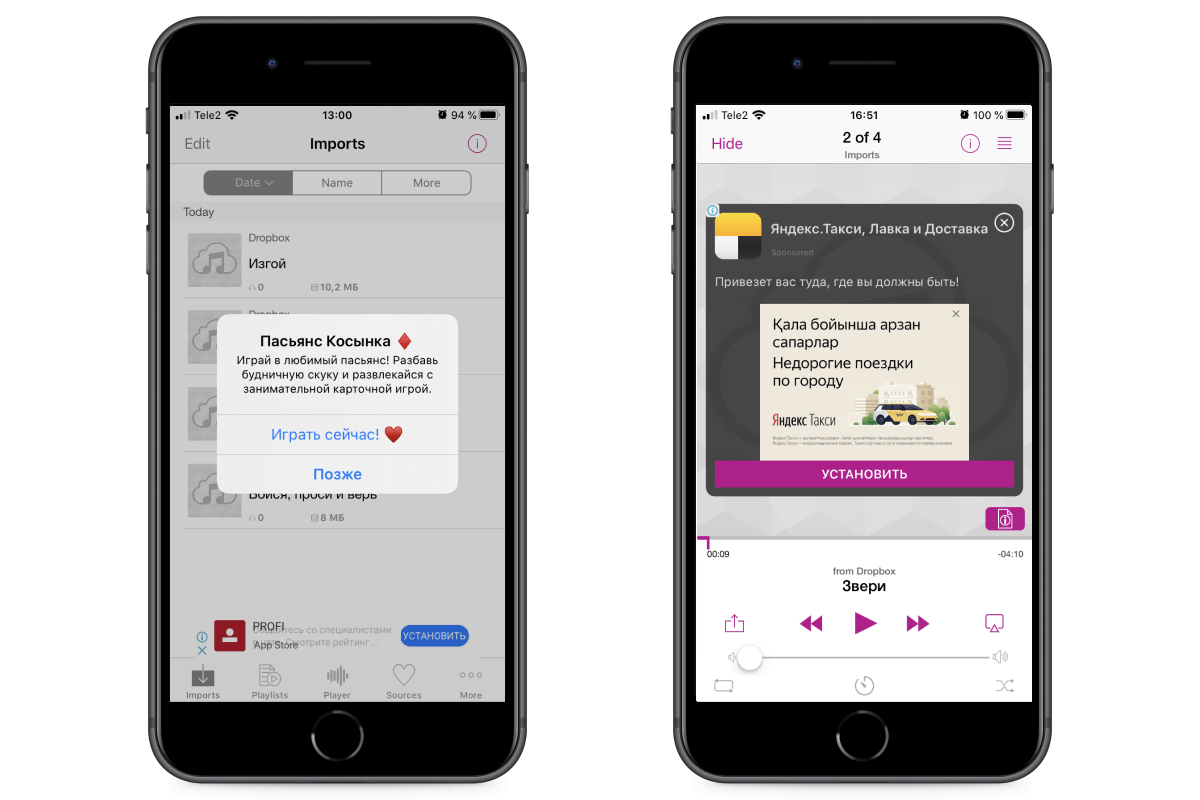 The developer did a sneaky thing - in the previews he gave ads in Russian, but in fact the application remained in English. It's not a big deal, but it's unpleasant. Go to the Sources section and add the storage to pick up music from: Dropbox, Google Drive, iCloud Drive, as well as your own music library, files, and mail.

The application hooks up without any problems, but the developer made a very intrusive advertising - periodically some banners pop up, in the song lists are also displayed ads, in general, annoying. But much less than the previous application, and you can also pay money (299 rubles) and disable advertising forever. Judging by the comments, the problem with aggressive advertising appeared back in mid-2017. We don't need such a program. 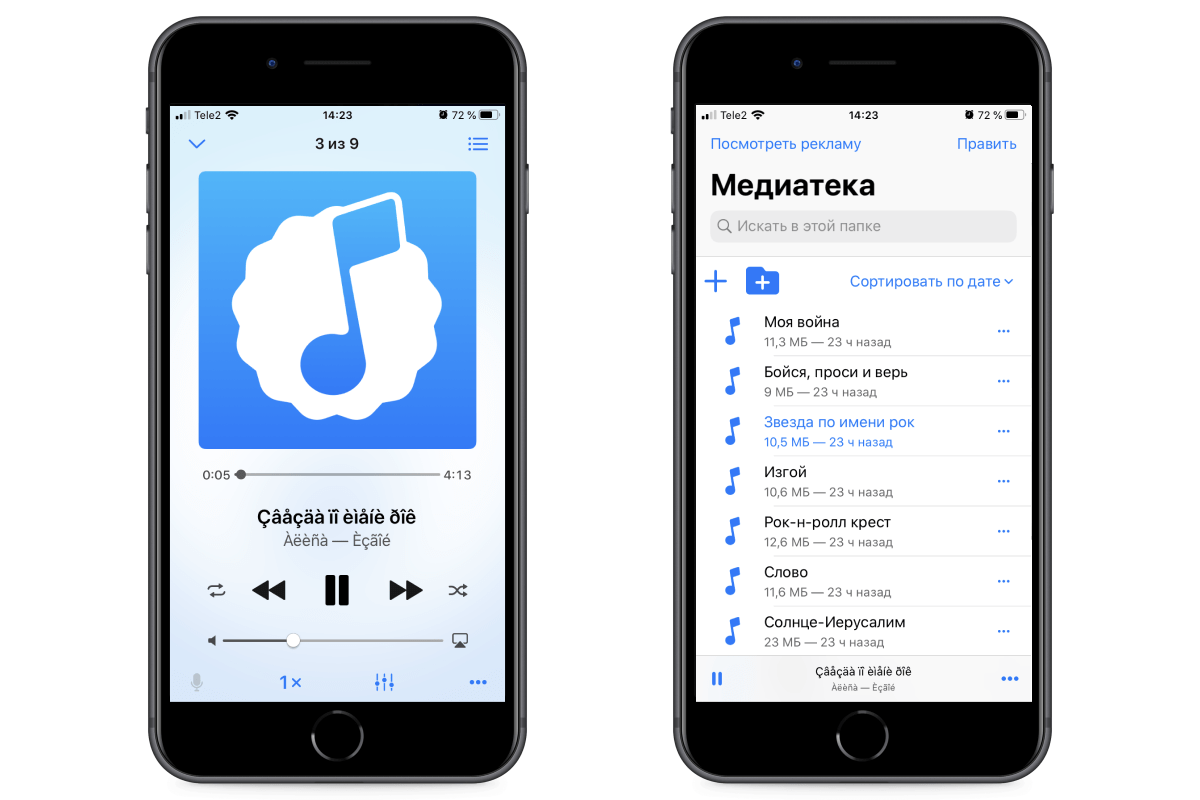 To be honest, I was even scared of this app - the Russian-language segment of the App Store rarely gives such scores and in such quantities. In fact, it turned out to be an analogue of the "Files" application, which is able to play music. Moreover, the application is made extremely incomprehensible, with a minimal interface - there are no menus, the controls are intuitive incomprehensible, and fonts are eaten (if you attach music through Dropbox). Users have been complaining about usability since late 2018, but since then no attempts have been made by the developers to fix the situation. The ads are there, but in small doses. 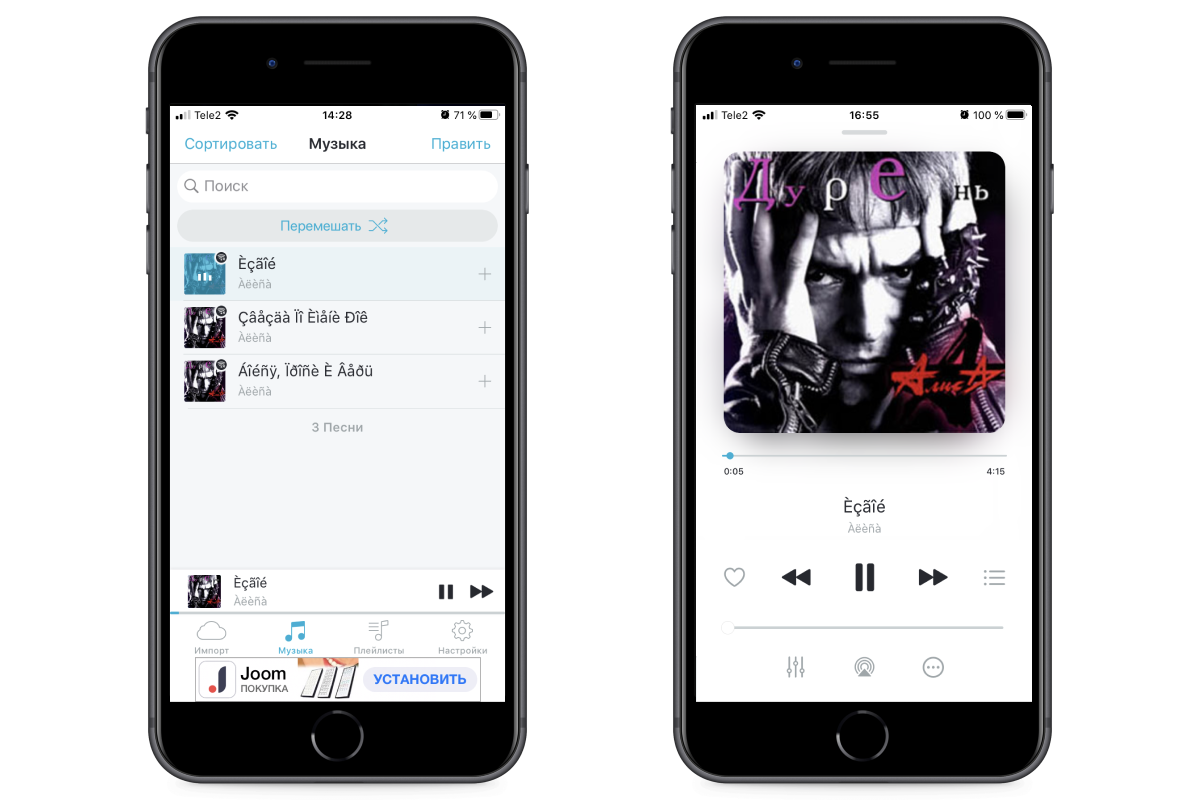 Here's what the developer himself says about the app:

Number 1 among music players in the AppStore for your iPhone/iPod/iPad. Over 10,000,000 copies worldwide.

The application knows how to work with a bunch of cloud services, hooks music from your library and the application "Files", as well as knows how to share via Wi-Fi. By the way, the previous programs did not have such an opportunity, which is only an additional plus for the Meloman. True, the advertising at the bottom of the screen is embarrassing. Well, and if you download music through Dropbox, the fonts are displayed incorrectly. Offline, of course, works.

Otherwise, it's pretty good. The app offers to buy a premium version (80 bucks) or subscribe (2 / 3.5 / 17.5 bucks for a week / month / year). For that you get a visualizer, EQ presets, some programmatic bass and vocal boosts, get rid of ads, and so on. But you didn't come here to spend money, right? 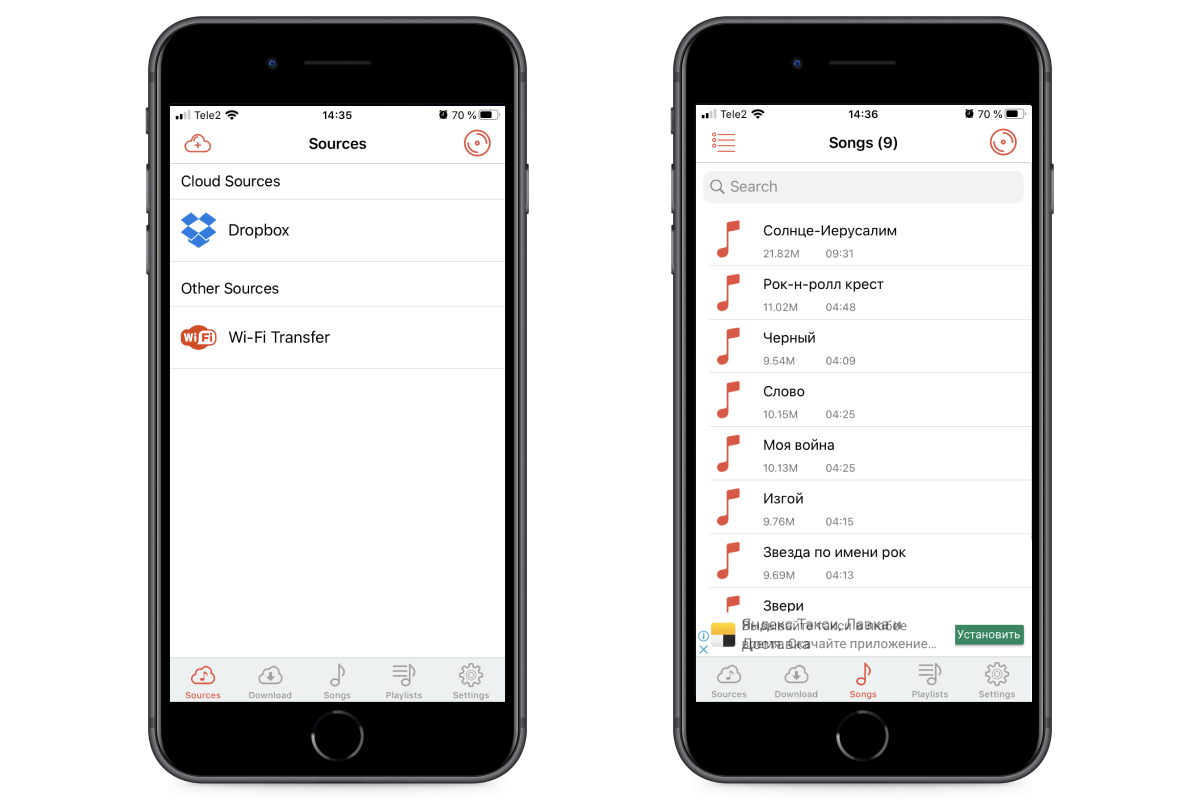 It is strange that this app is not at the top of the App Store list. You can also plug music from cloud services and via Wi-Fi, and the songs are displayed normally (import from Dropbox). It works well, the navigation is clear (though, again, in English). For 149 rubles the ads are removed, but I did not catch any pop-ups - only an annoying banner under the menu. All songs are played in offline mode.

In fact, such applications are not really clear why - in theory, the process of synchronizing the songs is a painful, but not as complicated as it seems. Although I myself faced the problem of improper organization of my music library - as soon as I changed the location of the files, the smartphone took out half of the songs and scolded me terribly. So in order to properly download music to the phone, you should take care that all the songs at once were in their places. And preferably on a removable drive of some kind, so that if you change computers, you don't have to carry the entire library with you.

So if you're too lazy to keep your music in order, I recommend taking a closer look at Cloud Music. 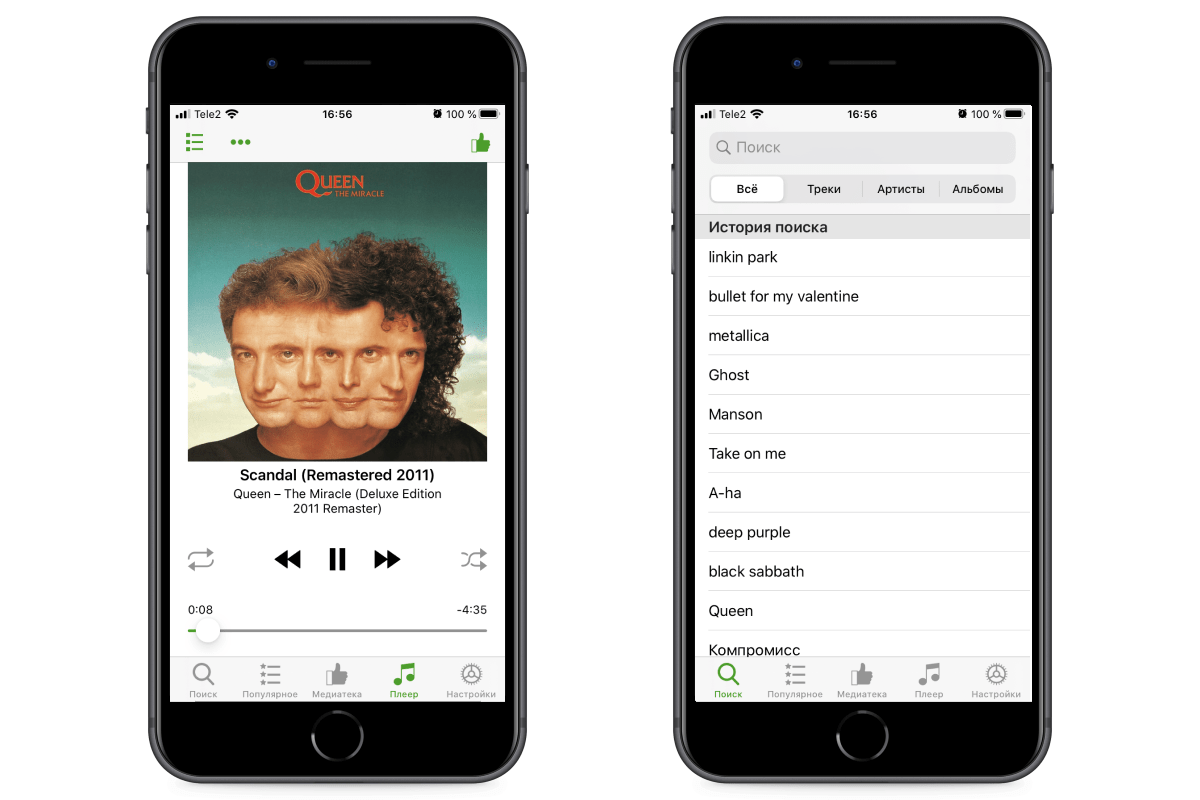 Unfortunately, I could not find a good quality application in any other store, and only in Kazakhstan (and Belarus) there is this application, which covers almost all needs. I suppose that this program is not available in other stores, because almost all CIS countries are very watchful of copyright. And MusicMax, apparently, takes music from VK and broadcasts through its app, but without restrictions. Therefore, there could potentially be issues with copyright holders, and it's better to just not let this app into the store.

If you've listened to at least one track, it will automatically download to the app. So you can drop songs into the app's media library, listen to them, and you'll always have access to them offline. So you don't even have to search for any songs - you can save everything online.

All in all, I'm using MusicMax so far, and if this app suddenly meets your needs, I highly recommend it.

PocketCasts - the best podcast player to replace the standard one

Great article. Thanks a lot, buddy. MisicMax is the best app for music.