Our editorial team has been playing Battle Legion for a week now - so far the game is very enjoyable, but there are some things I would like to point out to the developers. In short, it is a simulator "wall-to-wall", where you are responsible for the composition of your own "wall", and the stronger its members, the higher you will rise in the rankings. The game is conditionally free, which imposes a certain imprint on the game in the form of donation, and with the increase of their own rating the dependence of fighters on the pumping only increases.

Guide: how to play Battle Legion

The playing field is divided into 2 equal parts - on one side are our troops, on the other side there will be an enemy unit. Before the battle, in the corresponding tab, we choose the composition of the army and its location on our side - for example, we put archers at the back to be protected by infantry. As we advance through the gridiron, new characters will be unlocked, and their presence on the battlefield will determine the formation. So, after placing the fighters in the location, we go to the battle tab - to start the fight you need to swipe the right half of the screen up or down, simulating the start of the slot machine. You wait for a while, and then just watch your troops fight the enemy, without taking part in the battle in any way. Similar to Auto Chess - here the pieces also move by themselves, you just set their location on the playing field and provide pumping. 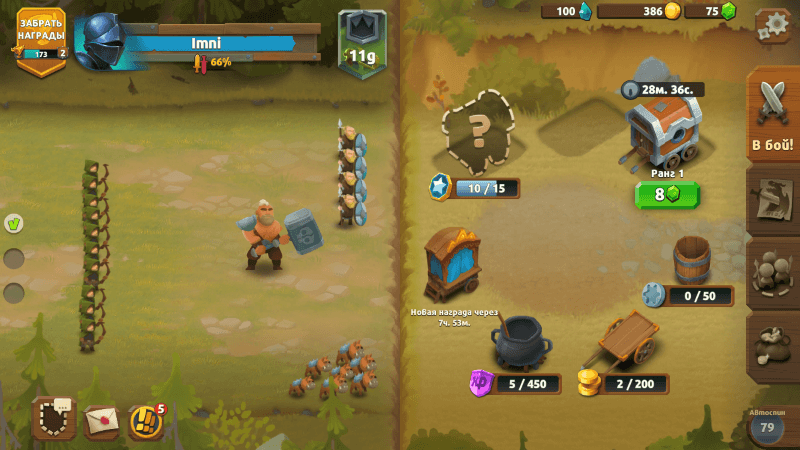 Any game based on the unit-card system is reminiscent of Clash Royale in one way or another, and there are plenty of references here as well. In order to get new units, we need to open chests - although there are not four, but three, and they are opened for 4-8 hours. Or join a clan, which here, too, plenty - a clan can consist of a maximum of 20 players, and you also at certain times to request the necessary characters. Another option - just pay and get a large number of different units - here's your choice. By the way, there is also a battle pass for the season, which costs exactly the same as a similar battle pass in Clash Royale.

The army has a limit on the number of units, but upon reaching the next level the composition of the army can be increased (to see how much limit a particular unit requires, you should look in the tab "Army"). Also the size of the location itself increases - don't forget to react to such things and increase the number of units in the squad in time, as well as to place them correctly on the battlefield. This is very important - if you don't move the archers closer to the back line, assassins can teleport to them and cut them all out. 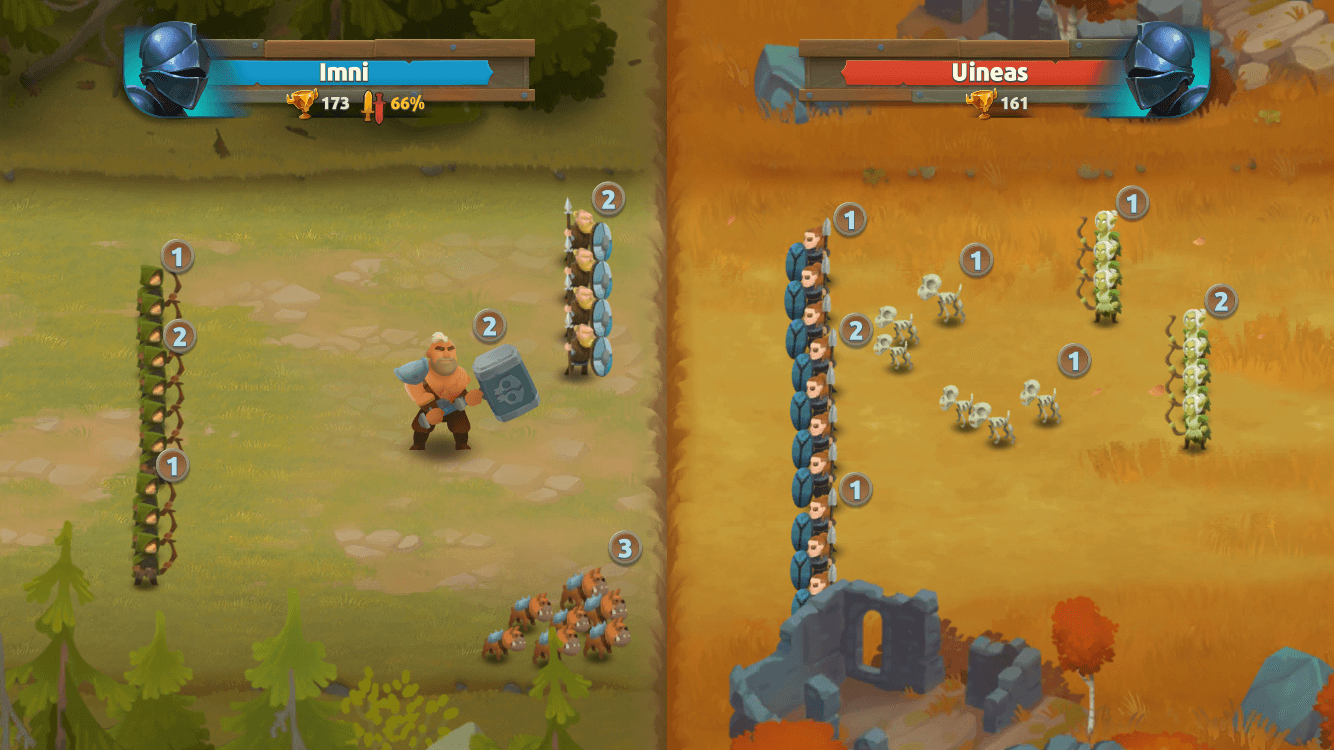 What characters are in Battle Legion

There are a total of 13 levels in the game, and each level has 3 characters (at level zero, there are 2 characters). Each new level opens when you reach a set number of cubes, so if you are stumped at the next wall and do not move up the ladder, it is worth paying attention to pumping existing units. But globally, units in Battle Legion can be divided into:

Depending on which characters you have, the gameplay changes as well. As of today, this is what the strongest characters in Battle Legion look like: 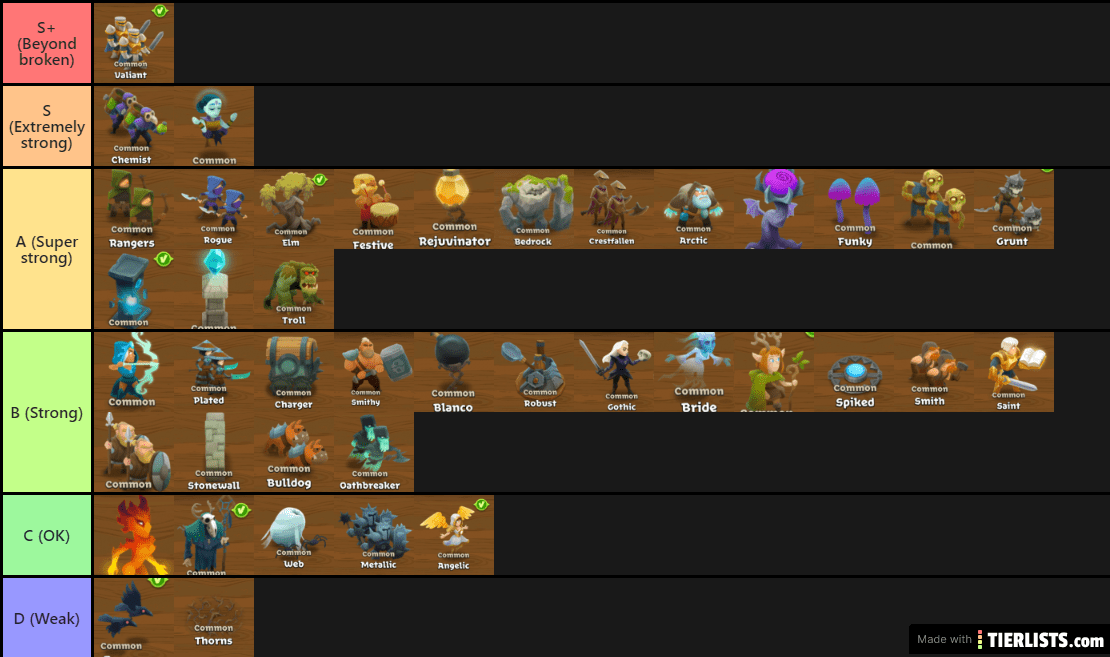 As you can see, the default archers, opening from level 0, are in A-tyr, so we recommend to bet on them and pump from the beginning, if you just installed the game. Characters from S-tyr are unlocked at high levels, so you may not look at them yet. Except, of course, for plague carriers - they appear at rank 4.

Formation and tactics in Battle Legion

Let's talk about the most popular tactics in Battle Legion. In general, the formation depends on what cards you already have in the game. Let's take the first 2 ranks as an example. My cards:

We put archers back, and I have three units on the field at once. In front of them - Bogatyr, he is a good tank and throws the enemies back. And in front of Bogatyr put Knights, they also absorb damage, but very slowly moving. Dogs are located in the lower right corner and act as "flankers" - they try to run into the side of the tanked characters, but the best thing would be if they start chewing out the Archers of the enemy. With the emergence of Mercenaries (A-tir) it is worth trying to replace them with Dogs (B-tir). They are much more effective units - then we leave only Bogatyr, Warriors (2 squads) and Archers (3 squads) on the location, and instead of Dogs and Knights we put Mercenaries. And it's easy to get up to rank 3.

I recommend watching the video, the guy has been a long and tight fit on Battle Legion and in this video he explains the best tactics in the game to get to 3000 ranks. It's helpful starting at 2:30 minutes).

In general, the game has only one problem, which immediately want to draw attention - the dependence on donation, but this is normal for freemium. Take the same Clash Royale - Until you collect the strongest possible units, you'll always be stuck at some limit, which you can break as you level up. That's why the placement doesn't play a role - the result depends more on the pumping (and individual effectiveness) of the available cards. But the game turned out to be good - 516 ratings with a 4.9 rating only confirms it.